Cerberus is a giant three-headed dog that first appears in the episode It's About Time. He is responsible for guarding the gates of Tartarus.

Cerberus' design is that of a giant, three-headed black bulldog with red pupils and a spiked collar on each neck.

In Greek and Roman mythology, Cerberus, or Kerberos, was a three-headed dog-like beast with a serpent's tail that was responsible for guarding the gates of Hades and keeping the dead from leaving. Heracles was sent to capture Cerberus as one of his twelve labors.

Cerberus first appears in the season two episode It's About Time. During Twilight Sparkle's attempts to "disaster-proof" Equestria to prevent an impending disaster, Cerberus suddenly appears in Ponyville, frightening ponies and chewing on building roofs. According to Twilight, he is responsible for guarding the gates of Tartarus, and with him away from his post, "all the ancient evil creatures that have been imprisoned there could escape and destroy Equestria".

Twilight steps forward to challenge Cerberus, but Fluttershy quickly tames him by scratching his belly. Using one of the balls that Pinkie Pie has stashed around Ponyville, Twilight takes Cerberus back to Tartarus. The next day, Spike receives a 'Lost Dog' poster from Princess Celestia and remarks, "I guess the princess hasn't heard we found Cerberus yet."

In the season four episode Twilight's Kingdom - Part 1, Princess Luna theorizes that Cerberus' absence from his post in It's About Time allowed Lord Tirek to escape his imprisonment in Tartarus. He is mentioned by Tirek and briefly appears near the end of Part 2 guarding the jail when Tirek is re-imprisoned.

Cerberus briefly appears guarding Tirek and Cozy Glow's cages in The Beginning of the End - Part 1.

In My Little Pony: Friendship is Magic Issue #82, Cerberus leaves his guard post at Tartarus again, and Princess Celestia charges Rarity with giving him obedience training. After struggling repeatedly to get him under control, Rarity realizes that Cerberus is bored with his job, and resolves to help him find time to play.

In the "Trot Secret" group quest, Sweetie Drops mentions having dealt with a Cerberus in Manehattan's Crystaller Building.

Ancient myths say that CERBERUS is a giant three-headed dog charged with the task of guarding the gates to the nightmare realm known as Tartarus. This ferocious creature is responsible for preventing the evil trapped behind the gates from escaping.

Cerberus appears on the Season 2 poster/DVD set packaging/T-shirt and the Chaos is Magic poster.

In Enterplay's collectible card game, Canterlot Nights expansion set card #149 R, Soothe the Savage Beast, depicts Cerberus as he appears in It's About Time and gives the description "Hopefully none of the creatures locked up in Tartarus realize that giving Cerberus a belly rub is all they need to do to escape!" The Crystal Games expansion set card #157 R of Cerberus gives him the description "Cerberus is usually busy guarding the gates of Tartarus, but when he's off the leash it takes way more than a rolled up newspaper to get him in line." High Magic expansion set card #117 R of Cerberus states "Star Swirl the Bearded did a good job teaching Cerberus how to keep evil creatures in check. Unfortunately, he skipped the obedience training." 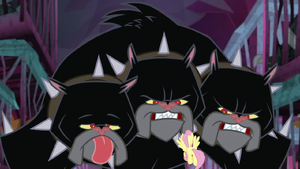