Chancellor Neighsay, or simply, Neighsay,[note 1] is a male unicorn pony who first appears as the antagonist of the season eight premiere School Daze. He is the head of the Equestrian Education Association, or EEA, a board of scholars who oversee all schools in Equestria.

Neighsay's name is a portmanteau of "neigh" and "nay-say", which means "to oppose". It is similar to the song Neighsayer, the in-series expression neighsayer, and the character Neigh Sayer.

Jim Miller has stated that Neighsay's resemblance to Doctor Strange "wasn't intentional"[1] but regarding the inspiration for Neighsay, "There’s a touch of sorcerer supreme in there for sure. Plus some Sheriff of Nottingham"—as played by Alan Rickman[2] in Robin Hood: Prince of Thieves—"and other stuff."[3]

In School Daze - Part 1, Chancellor Neighsay first appears when Twilight Sparkle and Spike meet with him and his association in order to get the School of Friendship approved. The chancellor approves the school with the conditions that they strictly follow the EEA's guidelines and not leave the school unattended to go off on their friendship adventures. In addition, he approves it under the assumption that it will be a school for ponies only, and will teach its students how to protect themselves from other creatures.

Neighsay later pays a visit to the school to check on Twilight's progress, just as the new students decide to cut class for the afternoon. Twilight, Starlight Glimmer, and Rainbow Dash distract him by giving him a tour of the school and summarizing the main points of its curriculum. The students return in time for Friends and Family Day, but changeling student Ocellus appears in the form of a giant insect-like creature, causing chaos at the event. Upon seeing that non-ponies are enrolled at the school, Neighsay reveals his prejudice toward other creatures and insinuates that they would use the school's lessons against Equestria.

Neighsay's sentiments are such an insult to Prince Rutherford, Ember, Thorax, Grampa Gruff, and Seaspray that they pull their students out of the school. Determining that Twilight failed to uphold the guidelines and standards of the EEA, Chancellor Neighsay closes the School of Friendship and locks its doors with a magical seal.

In School Daze - Part 2, Neighsay returns when Twilight breaks his magic seal in an attempt to reopen the school without the EEA's influence. He declares that the school's non-pony element would be dangerous and unpredictable, but his views are opposed not only by Twilight but also Princess Celestia. The chancellor eventually relents and leaves, proclaiming that Twilight's school could potentially destroy Equestria.

In School Raze - Part 1, Neighsay appears at the School of Friendship again. Fed up with Twilight constantly leaving the school insufficiently attended, especially during the crisis of magic disappearing across Equestria (and after being led to believe she had left Cozy Glow in charge), he assumes control of the school and declares it to be for ponies only. He also ties up the Young Six for suspicion of being the ones responsible for the disappearing magic, intending to summon their guardians to take most of them home. In Part 2, Neighsay's new position as the school's headstallion is usurped when Cozy Glow orchestrates a school uprising, and she and the students tie him up in chains. After the Young Six help him escape, he uses his EEA medallion to travel to Canterlot and warn the princesses about Cozy's plans. In the end, he realizes he was wrong about non-pony creatures and welcomes Twilight back as headmare.

In The Ending of the End - Part 2, Chancellor Neighsay takes shelter with other unicorns inside the School for Gifted Unicorns as Canterlot closes itself off from the other pony races. Later, he rallies the unicorns in the final battle against Queen Chrysalis, Lord Tirek, and Cozy Glow.

Chancellor Neighsay is a character in Gameloft's mobile game, and serves as a boss during the "School Raze" and "The Crowning Achievement" events. His in-game description states, "The supercilious head of the Equestria Educational Association ALWAYS does things by the book. The book is about pedagogy, and it is extremely long." He has an altered role in the game's adaptation of School Raze, which sees him attempting to take over the School of Friendship by force.

Chancellor Neighsay is portrayed as very strict, controlling and conservative, insistent that all schools under the EEA's authority follow its guidelines. He quickly develops a grudge against Twilight for dismissing those guidelines. He is convinced that his way of doing things is the right way, and allows no other opinions to dissuade him, even disregarding Princess Celestia herself supporting Twilight's decisions. He even demonstrating his slightly tyrannical point of view, as he was enraged at Twilight and the others for standing up to him.

He is also very prejudiced towards non-pony creatures, openly describing them as dangerous and even going as far as to disrespect them while in their presence. When magic starts disappearing from Equestria, he assumes that Twilight's non-pony students are responsible. This prejudice can also make him a bad judge of character and borderline naive, as he quickly gave credit to Flim and Flam's Friendship University just because of the pony-only enviroment of the university, in spite of the two being known con-artists. This also led him to free Sandbar when he claimed to agree with his views, not seeing anything suspicious on him suddenly and abruptly betraying his friends.

Despite his rough personality, however, he does appear to care for the quality of education and the safety of pony students, justifying his actions and beliefs as being for the greater good of Equestria. When Cozy Glow takes over the School of Friendship and betrayed him, he became remorseful over his actions, recognizing his prejudice and how he treated others. After being rescued by the Young Six and foiling Cozy Glow's scheme, Neighsay shows a kinder and more tolerant attitude, apologizing for his prejudice and finally showing acceptance of Twilight's institution.

"Princess Twilight Sparkle. I am Chancellor Neighsay. Equestria owes you a great debt. But princess or no, we expect you to do things by... the... book!"
— School Daze - Part 1

"And can we trust you to follow through with this plan? Will you leave the school unattended to gallop off on your... "adventures"?"
— School Daze - Part 1

"Those are students? But you said you were opening this school to protect Equestria! To defend ponies from... dangerous creatures who don't have our best interests at heart!"
— To Twilight Sparkle, School Daze - Part 1

"Well, perhaps you should return to your kind."
— To Prince Rutherford, School Daze - Part 1

"Irresponsible teachers, students skipping class, endangering ponies! Your school is a disaster. Perhaps if you had had higher standards for who was admitted, this could have been avoided."
— To Twilight Sparkle, School Daze - Part 1

"Classes won't start at all! The EEA has spoken, and none shall pass!"
— School Daze - Part 2

"Allowing all of these creatures to attend your school, changing the rules for them – it simply won't work!"
— School Daze - Part 2

"The Equestria Educational Association has taken an interest in institutions that teach friendship in a pony-first environment."
— Friendship University

"I understand feeling threatened by competition, but my word, Princess. I wonder if the ill manners of the creatures at your school aren't contagious. I think I will take my leave before I become infected."
— To Twilight Sparkle, Friendship University

"With Equestria under attack, ponies must stand together. Twilight has endangered us all by skipping off on friendship trips while these dangerous creatures run loose."
— School Raze - Part 1

"I thought friendship was something only ponies should share with each other. But you all taught me how wrong I was. I suppose true friendship can take a lifetime to understand."
— To the Young Six, School Raze - Part 2 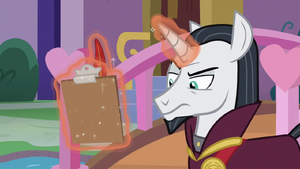