Changelings are a race of creatures in Equestria that first appear in A Canterlot Wedding - Part 2 as the secondary antagonists and the minions of Queen Chrysalis. They also appear in several other episodes and IDW comics.

Changelings are largely equine in appearance but possess insect-like characteristics. They have black, carapace-like, furless exteriors, webbed manes and tails, blue non-reflective eyes (unlike their queen's), fangs, bent horns, jagged ears, insect-like wings, and holes in their legs. Unlike ponies, changelings do not have cutie marks. Following their metamorphosis in To Where and Back Again - Part 2, changelings have varied coat colors and insect characteristics, such as Thorax and Pharynx's horns, and they no longer have fangs or holes in their bodies. They also have more physical differences among them: some possess longer, more jagged horns, and others no longer have horns at all. Others still no longer have tails. Some also have a trio of gemstone-like objects in their chests.

Like Queen Chrysalis, the changelings were designed by Rebecca Dart.[1]

The changelings' nature and desire to feed on love are similar to changelings in folklore, who would take advantage of the love given to them by their unwitting caretakers.

When asked if the metamorphosed changelings can still fly, supervising director Jim Miller answered "Some don't fly now that they've changed".[2] He further explained that "It was a design choice more than anything. We wanted a quick visual way to sell that they were no longer beholden to their previous hive-mind ways. Hence the brighter colours and different body shapes and configurations. Helps to denote “individuality” in a visual way."[3]

Changelings first appear in A Canterlot Wedding - Part 2, the second part of the season two finale. They are able to change their appearance to match that of ponies; in particular, Queen Chrysalis shape-shifts into Princess Cadance, and several changelings take the form of Twilight Sparkle and her friends.

In the episode, Chrysalis explains her desire to take over Equestria, saying, "Equestria has more love than any place I've ever encountered. My fellow changelings will be able to devour so much of it that we will gain more power than we have ever dreamed of!" The changelings soon break the magical protective sphere around Canterlot and terrorize the city and its inhabitants. When Princess Celestia orders the Mane Six to recover the Elements of Harmony from a nearby tower, the changelings take the form of the six ponies and fight them, preventing them from reaching the Elements. They subsequently take the ponies and Princess Celestia captive. The changelings and their queen are defeated when Shining Armor and Princess Cadance's combined magic throws them out of Canterlot at the end of the episode.

According to merchandise, Kevin appears within a crowd during at least the beginning of Let the Rainbow Remind You in the season four episode Twilight's Kingdom - Part 2. In the season five episode Slice of Life, Kevin appears in the audience at Cranky Doodle Donkey and Matilda's wedding, unintentionally frightening some foals.

In Do Princesses Dream of Magic Sheep?, several changelings appear in Rainbow Dash's dream. A changeling costume is worn by Diamond Mint for Nightmare Night in Scare Master. In The Cutie Re-Mark - Part 2, due to both Starlight Glimmer and Twilight Sparkle's changes to the past, the changelings are shown to have successfully taken over Equestria, leaving only Zecora and a small tribe of ponies to resist them.

A friendly changeling named Thorax appears flying in the background over the Crystal Empire at the end of The Crystalling - Part 2 and is befriended by Spike in The Times They Are A Changeling. The latter episode also depicts how new changelings are born, in that they are hatched from eggs in the form of larvae, similar to insects, and shows that changelings can assume the forms of non-pony creatures, such as Spike, and inanimate objects, such as rocks.

In the season six finale To Where and Back Again - Part 1, the changelings silently invade Ponyville, taking the Mane Six's places and seizing control of the Castle of Friendship. In Part 2, the changelings serve as Chrysalis' primary means of defense in the Changeling Kingdom. They pursue Thorax - disguised as Trixie - as he distracts them with smoke bombs, capture Discord by disguising themselves as Fluttershy, and ambush Starlight Glimmer in the changeling castle throne room.

Through Starlight's guidance and Thorax's example, the changelings learn to share love with one another instead of taking it by force. This results in a drastic metamorphosis in which they become colorful, love-filled creatures with the holes in their bodies healed, resulting in Chrysalis' throne being destroyed, and her hostages freed from their cocoons. With Queen Chrysalis dethroned, Thorax becomes the new leader of the changelings.

In Celestial Advice, multiple changelings appear in attendance of Starlight, Discord, Trixie, and Thorax's medal-awarding ceremony, and they appear in one of Twilight's magic simulations, with one of them giving his name as Cornicle. In Triple Threat, Thorax tells Spike that there is a renegade group of changelings in the Changeling Kingdom that is still clinging to the hive's previous ways of stealing love.

In To Change a Changeling, the Changeling Kingdom has started growing plants again following Chrysalis' dethronement. Thorax has convinced most of the renegade group of changelings to accept the hive's new ways, with the brief exception of Thorax's older brother Pharynx. The changelings as a whole have also embraced new kingdom activities such as theatre, dancing, arts and crafts, and therapy meetings called the "feelings forum".

In School Daze - Part 1, a shy changeling named Ocellus enrolls as a student at the School of Friendship. In The Hearth's Warming Club, changelings appear celebrating the Hearth's Warming holiday for the first time, but they take Twilight Sparkle's celebration instructions very literally, including "hanging" a tree from a rope, "diving" into a pool of punch, and "building" a fire out of wood and nails. In What Lies Beneath, illusory unreformed changelings appear when Ocellus is forced to face her fears by the Tree of Harmony.

In The Beginning of the End - Part 1, Chrysalis carves the faces of unreformed changelings into logs to speak to them. In Uprooted, Ocellus' parents and siblings are briefly seen signing her permission slip. In Between Dark and Dawn, a couple of changelings appear during the song Lotta Little Things. In A Horse Shoe-In, Ocellus' parents appear at a parent-teacher conference talking to Octavia Melody.

In The Ending of the End - Part 2, the changelings are rallied by Ocellus to help the ponies in the final battle against Queen Chrysalis, Lord Tirek, and Cozy Glow. During the battle, they transform into the Mane Six to throw the villains off. In The Last Problem, some changelings appear in future Canterlot and at Twilight's coronation in flashback.

Flashback footage of Canterlot Wedding - Part 2 with the old-style Changelings bringing the captured Mane Six to Chrysalis in the wedding hall reappears in Harvesting Memories.

In the IDW comics' Friendship is Magic comic series, the changelings and their queen appear as the antagonists of the story arc The Return of Queen Chrysalis, which takes place after the second season of the show.[4][5]

In the story, the changelings invade Ponyville and assimilate into the populace. Their invasion is later revealed to be part of a much larger plan for Queen Chrysalis to consume Twilight's magic. A changeling with a helmet appears briefly in A Canterlot Wedding - Part 2; they are featured more prominently in the comic series, where they serve as guards and advisors for Queen Chrysalis. Issues #3 and #4 feature changelings with spoken dialogue for the first time while in their true forms.

In the My Little Pony: FIENDship is Magic Issue #5 story, it is revealed that the changelings invaded several kingdoms in the past, including those of King Orion and Emperor Incitatus, though the latter invasion was thwarted by Princess Celestia. It is also revealed that the original changelings were born from a carnivorous plant that grew from a rotten acorn that fell into a magic pond under a cemetery. They were inadvertently released by Star Swirl the Bearded, who nailed a warning sign to the plant to keep others away, only to create a crack from which the changelings emerged. At the end of the issue, the changelings escape from imprisonment together with Chrysalis.

In My Little Pony Annual 2017 chapter 1, the changelings launch an attack, with two being dispatched to distract Rainbow Dash by disguising themselves as Shadowbolts. In later chapters, they appear menacing Pinkie Pie, Cheese Sandwich, the Wonderbolts, Twilight Sparkle, and others, culminating in an attack on Ponyville. They are eventually chased off when Spike magically grows to giant size. In My Little Pony: The Movie Prequel Issue #4, a sign banning changelings from Klugetown appears on page 6.

In My Little Pony/Transformers Issue #1, some changelings that are still loyal to Queen Chrysalis appear and help her summon changelings from another world. However, their spell goes awry, summoning the Autobots and Decepticons to Equestria instead. In Issue #4, they are seen participating in the final battle at the Crystal Empire.

In Lyra and Bon Bon and the Mares from S.M.I.L.E., Agent Sweetie Drops and new recruit Lyra Heartstrings are assigned by the Secret Monster Intelligence League of Equestria (or S.M.I.L.E. for short) to investigate a possible changeling invasion in Appleloosa. In Beyond Equestria: Rainbow Dash Rights the Ship, Thorax and several changelings help Daring Do and Brumby Cloverpatch after their airship crashes in changeling territory.

A changeling assuming Fleur de Lis's identity but pretending to be an Alicorn was added to the Android version of the game on March 28, 2013 and to the iOS version of the game on April 15, 2013, before being replaced by the real Fleur Dis Lee in both versions of the game on June 13, 2013. The game's description of Fleur Dis Lee has stated, "While this unicorn supermodel was away for a photo shoot, a Changeling assumed her identity but pretended to be an Alicorn! Knowing Fleur Dis Lee's true nature, her friends exposed the Changeling's deception just in time for her return to Canterlot."[6]

Changelings also act as recurring clearable enemies in the game, and have a storyline role in the "Trot Secret" group quest. Multiple Changeling Drones also serve as enemy minions during the "Reflections of Harmony" event, having been summoned from an alternate reality by the Pony of Shadows.

CHANGELINGS are grotesque shape-shifting ponies who can morph their bodies into anything. These frightening creatures have fangs as well as insect features and translucent wings designed to scare even the bravest pony into submission.

In Enterplay's collectible card game, changelings are featured on cards #139 R/#ƒ46, #157 R and #158 U/#ƒ50 in the Canterlot Nights expansion set and card #6 F in the Absolute Discord expansion set. In the High Magic expansion set, cards #84 C and #Pƒ14 name the changeling in Twilight's Kingdom - Part 2 and Slice of Life Kevin and list the respective quotes "Hey, I'm just here for the food." and "Now you see me, and now you don't..."

"Everything here is going according to plan! We've replaced the six ponies and their dragon, and have taken control of the castle!"
— To Where and Back Again - Part 1

"My queen, we're much too weak to launch another attack on Canterlot right away. What do we do? We need to regain our strength! Regroup! Form another plan..."
— The Return of Queen Chrysalis Issue #3

"I know that the ponies have seen through our camouflage and blocked us from the city... But is this really the way to get back in?"
— My Little Pony: FIENDship is Magic Issue #5 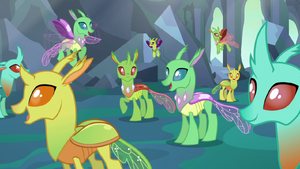