For other uses, see Merchandise#Tabletop RPG.

Charm is the placeholder name of a female unicorn with a lavender coat, violet mane and tail, and fuchsia pink eyes. Her cutie mark is unknown.

Charm has the same design and dress design as "Gold Slipper" and S04E01 Unnamed Unicorn Mare #1.

Charm most commonly appears among other high-society Canterlot ponies.

She first appears in The Best Night Ever as a guest at the Grand Galloping Gala. She is one of several chorus singers in At the Gala, and in the Gala ballroom, Pinkie Pie tries to encourage her to dance.

In Princess Twilight Sparkle - Part 1, Charm appears in the crowd panicking to Twilight when Princess Celestia and Princess Luna disappear. She appears in Maretropolis in Power Ponies, at Fashion Week in Rarity Takes Manehattan, at the Ponyville Days festival at the end of Simple Ways, in Sweetie Belle's dream and in Canterlot in For Whom the Sweetie Belle Toils, at the Rainbow Falls Traders Exchange in Trade Ya!, in the stadium crowd in the episode Equestria Games, and at the Crystal Empire in Twilight's Kingdom - Part 1.

Charm appears at the Grand Galloping Gala in Make New Friends but Keep Discord and watches a polo game in Princess Spike.

In The Beginning of the End - Part 1, Charm briefly appears walking through Canterlot with Fine Line. In She's All Yak, she appears in the montage of high-class ponies during Fit Right In. In The Last Laugh, she appears in a flashback in the line of Cheese Sandwich's customers at Kettle Corn's birthday party.

Charm is included in trading card puzzle B, appearing on the backs of the foil cards Royal Wedding Applejack and Royal Wedding Twilight Sparkle in parts of a shot from A Canterlot Wedding - Part 2. 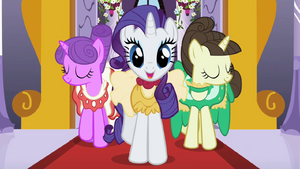