Miss Cheerilee's human counterpart appears in the My Little Pony Equestria Girls franchise. She is a teacher and librarian at Canterlot High School.

Contrary to her pony counterpart, Miss Cheerilee has light pink skin and dark purple hair. She has a similar color scheme to "Ruby Pinch". Her pigtailed design in Life is a Runway bears a slight resemblance to her G3.5 Earth pony counterpart.

Miss Cheerilee appears in My Little Pony Equestria Girls as a teacher and librarian at Canterlot High School. She assists Twilight Sparkle in using a computer, and she confiscates the speakers that the Cutie Mark Crusaders use to play their theme song's video on the adjacent computer. Near the end of the film, Cheerilee appears in a crowd of un-hypnotized students after Sunset Shimmer's defeat.

In Perfect Day for Fun, Cheerilee appears at the Canterlot High carnival with Big McIntosh. She later poses for a smartphone picture along with Scootaloo, Sweetie Belle, Apple Bloom, DJ Pon-3, Spike, Vice Principal Luna, Big Mac, and Trixie Lulamoon. In the encore short Life is a Runway, Cheerilee appears on the sidewalk as Rarity passes by. Rarity magically gives her a different outfit, and she models this outfit on a fashion runway. Cheerilee is last seen browsing clothes at Carousel Boutique.

In Photo Finished, Cheerilee appears as an unwitting subject of Photo Finish's photography for the school yearbook. When Photo Finish and the Snapshots cause a commotion in the library, Cheerilee shushes them silent.

In School of Rock, Cheerilee chaperones a student field trip to the Canterlot Natural History Museum. In The Finals Countdown, she informs her students of their final exams and later grades and returns them. She also makes a background appearance at the front of the school in A Little Birdie Told Me and oversees Twilight and Rainbow's final class in The Last Day of School.

In all three endings of Fluttershy's Butterflies, Cheerilee judges auditions for the school play.

In the second season, Cheerilee is seen in the audience for DJ Pon-3's concert at the Starswirled Music Festival in The Last Drop. In the Big McIntosh ending, she can be seen applauding Big Mac's performance. Cheerilee appears in the Bulk Biceps ending of Sock It to Me, spectating the CHS-CPA soccer game and then reacting with disgust after smelling Bulk Biceps’ smelly sock as it is being worn by Rainbow Dash during the game.

An Equestria Girls doll of Cheerilee was released as an "Encore" tie-in with My Little Pony Equestria Girls: Rainbow Rocks and is listed on Hasbro's website.[1] The back of the doll's packaging describes Cheerilee's "Rockin' Style" as "posh flower power".

As a high school teacher, Cheerilee is mostly depicted as patient and willing to help her students. However, she is considerably more disciplinary than her pony counterpart, as shown in her strictness in upholding the rules of the school library. Her interaction with Twilight Sparkle and the Crusaders also demonstrates that she's easily irritated.

"Uh, girls, what are you doing?"
— To Cutie Mark Crusaders, My Little Pony Equestria Girls

"No! The school computers are for research purposes only."
— My Little Pony Equestria Girls

"Sorry, Apple Bloom. School computers are for research only. Please get back to class. You, too, Sweetie Belle and Scootaloo."
— My Little Pony: Equestria Girls: Through the Mirror

"Oh, Pinkie! I hope you're not using a school computer to go to MyStable!"
— My Little Pony: Equestria Girls Holiday Special 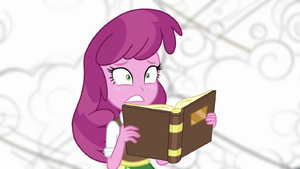 Retrieved from "https://mlp.fandom.com/wiki/Cheerilee_(EG)?oldid=2137669"
Community content is available under CC-BY-SA unless otherwise noted.