Cheese Sandwich is a male Earth pony and the self-titled "super duper party pony" who first appears in the season four episode Pinkie Pride. He has since appeared in later episodes, IDW comics, and other media. In the series finale The Last Problem, he is Pinkie Pie's husband years in the future.

Much of Cheese Sandwich's personality and appearance is based on his English voice performer: comedian and musician "Weird Al" Yankovic.

"Weird Al" Yankovic stated in a reddit AMA on July 15, 2014 that he "would be more than happy to bring Cheese Sandwich back to Equestria if that's what the[ writers] want!"[4] Show writer Nick Confalone stated in a Twitter conversation on June 26, 2015 that he would want Al back.[5]

In mid-May 2015, IDW's Bobby Curnow stated regarding My Little Pony: Friends Forever: "I think characters like Cheese and Coco are ripe for FF... neither have been pitched though, if I recall correctly."[6]

Cheese Sandwich makes his debut as the featured guest character in Pinkie Pride. He is first shown on the outskirts of Appleloosa, having just thrown a party for the ponies and buffalo. As he leaves, his Cheesy Sense points him in the direction of Ponyville.

When Cheese appears before Pinkie Pie and her friends, he introduces himself as the premiere party planner in all of Equestria. As his introductory song begins, he takes on a more excitable off-the-wall persona, playing the accordion and singing that he had wanted to be a party planner since he was a colt. At this point, he takes the reins of Pinkie Pie's party plans for Rainbow Dash and puts together a large birthday bash.

Later, when Pinkie feels her position as premiere party pony is threatened and challenges Cheese Sandwich to a goof off, Cheese accepts. During The Goof Off, Cheese displays an even greater inclination for bizarre behavior, singing a polka version of Pinkie's Smile Song and having his own, much larger party cannon. Pinkie Pie, realizing that Rainbow Dash isn't having fun, concedes the goof off to Cheese.

Cheese Sandwich later approaches Pinkie and tells her he never meant to take her place in Ponyville. He confesses that he was actually extremely shy as a colt, and he didn't realize his dream until he left his home and stumbled into Ponyville during a party thrown by the filly Pinkie Pie, which led to him earning his cutie mark. Having reached an understanding, Cheese Sandwich and Pinkie Pie team up to make Rainbow Dash's birthday party memorable.

During Equestria Games, Cheese is barely seen in the audience as Spike attempts to light the torch.

In Flutter Brutter, when asked to guess who was at Fluttershy's parents' house for lunch, Cheese Sandwich is one of Pinkie Pie's incorrect guesses.

Cheese Sandwich is mentioned by Pinkie in Fame and Misfortune as she reads the Friendship Journal.

In The Last Laugh, Cheese Sandwich invites Pinkie Pie to visit the Amusement Factory he opened. Once Pinkie arrives, Cheese reveals that he lost his ability to laugh some time after opening the factory and needs her help to recover it. Despite Pinkie's best efforts, she is unable to make Cheese laugh, and he sadly admits defeat. However, Pinkie realizes that Cheese actually needs to make others laugh, and after Cheese inadvertently causes some of his factory workers to laugh, he rediscovers the joy of bringing laughter to ponies directly instead of through a factory. After making his straight-faced vice-president Sans Smirk laugh, Cheese decides to return to his former life as a traveling party pony, leaving the factory in Sans' hooves.

In The Last Problem, Cheese Sandwich appears in future Ponyville during The Magic of Friendship Grows. Here, he is married to Pinkie Pie and has a son named Li'l Cheese. The younger Cheese appears among a group of characters near the end of the song.

Cheese gets mentioned by Pinkie in reused footage of her explaining her adventure to Cheese's Laugh Factory from The Last Laugh in Cakes for the Memories.

Cheese makes a brief non-speaking appearance during We Got This Together in My Little Pony The Movie.

In My Little Pony: Friendship is Magic Issue #94, Cheese Sandwich appears when Twilight summons him to help Pinkie plan the upcoming Festival of the Two Sisters. During this time, he and Pinkie struggle with their feelings for each other, then discover that some force has robbed Canterlot of all sound. In Issue #95, the cause of this phenomenon is determined to be a magical moss called Muffletta, and Pinkie and Cheese discover genuine laughter cancels its effects. Together, they succeed in destroying the overgrown Muffletta and bringing sound back to Canterlot. Afterwards, he and Pinkie agree that their laughter sounds better together.

In My Little Pony: Friendship is Magic Issue #99, Cheese is called in by Pinkie to organize a farewell party for her sister Marble, as Pinkie is struggling with her feelings over Marble departing for college. The two work together to give Marble a grand send-off, and Cheese finds himself having fun with other Pie family members.

Cheese is mentioned by Pinkie Pie in Discord and the Ponyville Players Dramarama after Discord says "The cheese stands alone," and Pinkie thinks he's in the theater. He also appears in the chapter book Beyond Equestria: Pinkie Pie Steps Up as one of the planners for Manehattan's Pony Popstravaganza.

Cheese Sandwich is a playable character in Gameloft's mobile game.[8][9] His in-game description states, "Whether it's a masquerade ball or a ball of mascarpone, Cheese Sandwich is the party-planning pony for the job!"

CHEESE SANDWICH is a superduper party pony (his words), and gives Pinkie Pie a run for her party-planning money. He even has a bigger party cannon than Pinkie, and once won a "goof-off" with her. Cheese Sandwich has some seriously cheesy skills.

When initially introduced, Cheese Sandwich has a rather serious demeanor, dressing in a cowboy hat and poncho. At first, his comedic side is only hinted by a rubber chicken wearing a bowler hat, which he carries on a saddle and calls Boneless. He speaks in a rather serious tone reminiscent of Clint Eastwood and other spaghetti western heroes.

Later, he reveals his true excitable personality. He also shares many traits with Pinkie Pie: he enjoys acting out and turning a party into a grand performance. He loves to sing and can play the accordion, and he possesses a "Cheesy Sense" that, similar to Pinkie's Pinkie Sense, lets him know when parties are in the middle of being planned.

Toward the end of his debut episode, Cheese Sandwich is shown to hold Pinkie Pie in high regard, wanting to impress her with his skills as a party planner because of the impact she had on his life.

His cutie mark mirrors his love for cheese and accordions, which he frequently uses for his parties.

As shown in The Last Laugh, Cheese Sandwich loses his ability to laugh if he is unable to see himself spread joy to others.

A mini-figure toy of Cheese Sandwich was leaked prior to its release. The toy was released as part of the eleventh wave of mystery pack toys and collector cards. The card states that "CHEESE SANDWICH likes making lunch for his friends!"

Enterplay trading card series 3 card #F62 states that "When Cheese Sandwich moseys into town, everypony's in for one epic party! This here cheesy guy is the only pony who can compete with Pinkie Pie for the title of best super-duper party pony ever. He holds the record for throwing the biggest parties in 27 towns across Equestria, including the infamous Cheesapalooza polka party in the city of Albuquercolt! Cheese Sandwich travels far and wide, using his Cheesy Sense to guide him—if there's a party in need, there he'll be." In the Enterplay collectible card game's expansion sets, Canterlot Nights #40 R and #ƒ19 cards of Cheese Sandwich, Canterlot Nights #102 R card Critter Stampede, Canterlot Nights #141 U card Joe's Doughnut Shop, The Crystal Games #35 R and #ƒ16 cards of Cheese Sandwich, The Crystal Games #125 C card of Boneless, and The Crystal Games #138 R card Party Bomb list quotes, Absolute Discord #7 C and #ƒ5 cards of Cheese Sandwich state that "From Appleloosa to Ponyville, from chilly Yakyakistan to the desolate San Palomino Desert, if there's a party in need then that's where Cheese will be!", and Absolute Discord #106 U card Photo Op lists the quote "Now, say Cheese Sandwich!"

Cheese Sandwich appears on the WeLoveFine T-shirts "Cheese Sandwich Vs Pinkie Pie", "Super Duper Party Pony", "Cheese In Your Knees!", and "The Periodic Table of My Little Pony", the first of which was released in January 2014, before the release of the episode Pinkie Pride but after the release of the first Pinkie Pride preview clip featuring him.

"I happen to be the premiere party planner in all of Equestria. If there's a party in need, there I'll be. Be it wingding, hoedown, hootenanny, or shindig, I'm your pony."
— Pinkie Pride

"Come on, ponies! Who here likes to party?"
— Pinkie Pride

"I was ready before I was born!"
— Pinkie Pride

"Another town, another party."
— Pinkie Pride

"I just can't have funny ideas. I need to wander the land and see ponies laughing at them. You can run the factory, but I need to liiiiiive!"
— The Last Laugh 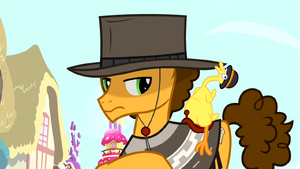