Chelsea Porcelain is the placeholder name of an elderly female Earth pony with a pale purple coat, bluish gray mane and tail, purple eyes, and a cutie mark of a tea set.

In The Mysterious Mare Do Well, Chelsea Porcelain appears with other elderly ponies on a balcony. When the balcony breaks and falls, Chelsea Porcelain and the other elders are saved by Rainbow Dash. In Hearts and Hooves Day, she briefly appears next to Mr. Waddle during The Perfect Stallion. She shuts her window as the Cutie Mark Crusaders pass by her cottage in Ponyville Confidential, and she appears with Mr. Waddle again at the first wedding ceremony in A Canterlot Wedding - Part 2.

Chelsea Porcelain appears on the Ponyville Days festival selection committee in Simple Ways, attends Flim and Flam's miracle tonic demonstration in Leap of Faith, welcomes Twilight Sparkle to the Rainbow Falls Traders Exchange in Trade Ya!, and appears in the Crystal Empire stadium in Equestria Games.

In Make New Friends but Keep Discord, Chelsea Porcelain appears as a guest at the Grand Galloping Gala, almost smothered twice by the Smooze. In Rarity Investigates!, she watches the Wonderbolts' performance alongside "Tornado Bolt".

In A Hearth's Warming Tail she receives a Hearth carol from "Princess Erroria", "Tornado Bolt", Liza Doolots, and "Ruby Pinch" in Twilight's story.

In The Perfect Pear, she appears in the beginning of the episode talking to Octavia Melody, as well as a young mare in multiple flashbacks. In It Isn't the Mane Thing About You, she makes more background appearances talking to Octavia in Ponyville and has a speaking role in the Quills and Sofas store asking the owner Davenport if the sofas came in different colors. In Once Upon a Zeppelin, she appears as a tourist on the zeppelin cruise. She also appears as one of multiple ponies photographing Twilight Velvet and Night Light and later plays bingo.

In School Daze - Part 1, she appears sans glasses as a member of the Equestria Educational Association. In School Daze - Part 2, her silhouetted form is seen talking to another pony when the Mane Six try to squeeze out of Sugarcube Corner. In Grannies Gone Wild, she appears talking with Sand Trap in Flim and Flam's Las Pegasus hotel. In A Rockhoof and a Hard Place, she makes another background appearance talking to Octavia in Canterlot.

In The Point of No Return, she appears in a picture in the lobby of the Silver Stables Retirement Community. She later appears painting on the Community's docks and as the drummer of the band with other elderly ponies.

In Coinky-Dink World, Chelsea Porcelain's human counterpart appears as a patron sitting with Sand Trap at the Sweet Snacks Café.

In Spring Breakdown, Chelsea Porcelain appears as a passenger on the Luxe Deluxe spring break cruise. She appears at the buffet with Mr. Waddle, eating in the ship after it experiences a power failure, and watching Trixie's magic show. As the ship sinks, she is rescued by the Equestria Girls and brought to a nearby island. Her pony counterpart also makes a cameo appearance walking in Ponyville.

In Sunset's Backstage Pass, Cheslsea Porcelain appears being scanned by a meticulous security guard in the security line of the Starswirled Music Festival in the second time loop of the festival's first day.

In the segment "Dashing Through the Mall", Chelsea Porcelain appears at a kiosk in the Mall as Rainbow Dash runs by with a gift for her friends' gift exchange.

"Oh, if these came in different colors, I'd buy one for every room."
— It Isn't the Mane Thing About You 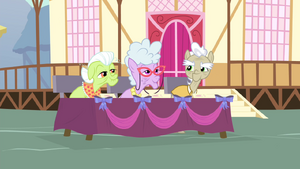