Start a Wiki
Cherry Berry is a female Earth pony with a hot pink coat, Naples yellow mane and tail, purple eyes, and a cutie mark of a pair of cherries. She is unnamed on the show, only being referred to as "Girl Pony" in the credits of the episode Princess Twilight Sparkle - Part 2, but she is named in merchandise and other media. She shares her design with Berryshine. She has speaking roles in Luna Eclipsed, The Mysterious Mare Do Well, The Super Speedy Cider Squeezy 6000, Putting Your Hoof Down, and Princess Twilight Sparkle - Part 2. Her design is similar to the G1 pony Crunch Berry, named Cherry Berry in the United Kingdom.

Cherry Berry is one of the more common background ponies, appearing in nearly two thirds of first season episodes. She first appears as one of the first background ponies seen upon Twilight Sparkle's arrival in Ponyville in Friendship is Magic, part 1. In Over a Barrel, she appears in Appleloosa, wearing a light brown, brown-banded cowpony hat. In the latter episode, she sometimes appears with the same mane style as Applejack with freckles added on her face.

She stands next to a stall in the marketplace in a couple episodes: in Griffon the Brush Off, it is a fruit stall full of apples, and in Call of the Cutie, she openly gestures to the wares in a vegetable stall.

In the episode Winter Wrap Up, she starts as a member of the plant team before switching to the animal team and back again to the plant team before the song begins. A duplicate of hers appears late in the song as a member of the animal team. Much later in the episode, in the ice-carving scene, she is part of the weather team. Also, during the song, a variant of her with a violet mane appears in a corner of the screen twice.

For Nightmare Night in Luna Eclipsed, she is dressed as a bumblebee. Her first spoken line is in this episode, explaining the spider-throwing game to Princess Luna. Her hair, with the bumblebee antennae of her Nightmare Night costume, is seen as a wig in One Bad Apple, during the Babs Seed song. In The Mysterious Mare Do Well, she plummets toward the ground in a ruptured Twinkling Balloon while wearing a pair of pilot's goggles. She gets whisked out of the balloon by the masked pony later dubbed the Mysterious Mare Do Well. Later in the episode, she apologizes after a flower pot drops from her window and almost hits Rainbow Dash. She has another line in The Super Speedy Cider Squeezy 6000 as one of Flim and Flam's customers, complaining about the taste of their cider.

In Hearts and Hooves Day, Cherry Berry hugs Cherry Fizzy in Ponyville Square. In Putting Your Hoof Down, she laments that "showpony business is tough" and Sweetie Drops asks Cherry Berry to tell her one of her jokes, while the two haul cartloads of garbage away from Ponyville. (Her joke starts "a donkey and a mule are stuck on a desert island") She is later seen in line at Sugarcube Corner, and, along with all the others, moves behind Fluttershy after she threatens the line-cutting Shoeshine.

In A Canterlot Wedding - Part 2, she appears as a crowd member.

In Magic Duel, she appears in the crowd after Twilight wins her rematch against Trixie, cheers happily with the town for Twilight, and later watches Twilight's magic performance for the ambassadors for Saddle Arabia. In Sleepless in Ponyville, she gets tangled together with Shoeshine and later appears in an argument with Comet Tail over an upturned produce cart.

In Spike at Your Service, she wears the same pair of goggles as in The Mysterious Mare Do Well and walks away with the Twinkling Balloon after Spike loses it, with an annoyed look on her face, implying that she is responsible for the balloon. She wears the goggles and handles the balloon a third time in Magical Mystery Cure.

In season five, Cherry Berry participates in the Running of the Leaves in Tanks for the Memories, watches the Appleloosa Rodeo in Appleoosa's Most Wanted, briefly appears in Ponyville in Make New Friends but Keep Discord, attends Cranky Doodle Donkey and Matilda's wedding in Slice of Life, appears at the Grand Equestria Pony Summit in Princess Spike, attends the friendship party in Party Pooped, appears in Ponyville's shared dream in Do Princesses Dream of Magic Sheep?, watches the Sisterhooves Social in Brotherhooves Social, and wears a dragon costume for Nightmare Night in Scare Master.

In On Your Marks, Cherry Berry is seen grape-stomping with Berryshine and Apple Bloom. In A Hearth's Warming Tale, she sings Hearth's Warming Eve Is Here Once Again, appears at the party watching DJ Pon-3 and Octavia Melody performing, and sings the lines of the reprise of the song. In Applejack's "Day" Off, she appears in the Ponyville Day Spa. In The Cart Before the Ponies, she watches the Applewood Derby. In 28 Pranks Later, Cherry Berry appears in the crowd of zombie ponies surrounding Rainbow Dash. She also appears in The Fault in Our Cutie Marks attending the baseball game and Gabby's cute-ceañera.

In Celestial Advice, Cherry Berry is one of the many ponies at the medal ceremony for Starlight Glimmer, Trixie, Thorax and Discord. At one point, she is seen talking with Crusoe Palm. In A Flurry of Emotions, she appears several times; at one point, when Flurry Heart races in the shopping cart, Cherry Berry appears as a Pegasus pony. She has a speaking role in Fame and Misfortune pointing Pinkie Pie out, and she also appears arguing with other ponies in the end. In It Isn't the Mane Thing About You, she appears in the crowd at Davenport's auction and in Mr. Breezy's shop admiring the giant fan. She also appears at Pinkie Pie's pie party in Secrets and Pies.

Cherry Berry attends the local comedy club in The Maud Couple, once again acts as a hot air balloon pilot for the "Gold Horseshoe Gals"' flight to Las Pegasus in Grannies Gone Wild, rides the Friendship Express in Surf and/or Turf, appears watching Trixie's show in Road to Friendship, and watches the Washouts' performance in the episode of the same name.

In the hour-long special My Little Pony Best Gift Ever, Cherry Berry appears preparing for the Hearth's Warming during One More Day.

Cherry Berry makes a brief appearance at the very beginning of My Little Pony Equestria Girls, walking alongside Shoeshine at the Crystal Empire train station.

Cherry Berry is one of many ponies seen in the establishing shot of Ponyville in My Little Pony Equestria Girls: Rainbow Rocks.

Cherry Berry appears alongside Golden Harvest, Daisy and other ponies outside Ponyville town hall in one of the dimensional rifts opened by Midnight Sparkle.

Cherry Berry is one of many ponies seen in the establishing shot of Ponyville in My Little Pony Equestria Girls: Spring Breakdown.

Cherry Berry is a playable character in Gameloft's mobile game, with the description "Cherry Berry is an Earth pony with a pair of cherries for a cutie mark. She thinks that breakfast, lunch and dinner should always be served with a cherry on top!"

Cherry Berry, with her green mane and one of her hats from Trade Ya!, appears in a promotional image posted by Hasbro's My Little Pony Facebook page on April 21, 2014.[3]

Cherry Berry appears in Cutie Mark Magic, in Nightmare Night, and in a photograph in The Magic of Friendship.

Cherry Berry appears in episode 3 of Rarity's Peek Behind the Boutique, "Customer Critiques".

A female Earth pony with Cherry Berry's likeness was released as a mystery pack toy in January 2012. The toy uses the Pinkie Pie mold, but its cutie mark is similar to Cherry Berry's and it features Cherry Berry's color scheme, with the exception of the eye color, which is green in contrast to the show's grayish indigo. Her name comes from the card that accompanies the toy. According to the European toy package, Cherry Berry "is so cheerful".[4] The U.S. mystery pack toy package has a longer description and reads, "CHERRY BERRY is so cheerful all the time!"[5] A "Royal Wedding" brushable toy named Cherry Berry was displayed in prototype form at the 2012 New York Toy Fair, and was released later in the same year, sometimes with a MiniDVD of Lesson Zero. This brushable toy has Cherry Berry's cutie mark and grayish indigo eyes, and its packaging uses the same design as the character in the show, but with the back portion of her mane duplicated. According to the package, Cherry Berry "thinks that breakfast, lunch and dinner should always be served with a cherry on top!"[6]

She appears in the Comic Con 2011 poster, wearing her aviator cap from The Mysterious Mare Do Well, Spike at Your Service, Magical Mystery Cure, Testing Testing 1, 2, 3, and Grannies Gone Wild while riding the Twinkling Balloon with Pipsqueak.[7]

In the Enterplay collectible card game's expansion sets, Absolute Discord card #43 C of Comet Tail attributes to Cherry Berry the quote "He ran RIGHT into one of those giant black vines while practicing that speed-up magic of his! I don't think he'll ever learn...", Absolute Discord card #184 C, Plunderseeds in Ponyville, shows her and him as in Princess Twilight Sparkle - Part 2 and attributes to him the quote "Definitely not my idea of a good time.", and Friends Forever card #21 C of her lists the quote "Honestly, the goggles are just for show. Hot air balloons really aren't that fast..."

On the DVD Season Four Disc 1, the closed captions for the episode Princess Twilight Sparkle - Part 2 refer to Cherry Berry by name.

"Try to land the sp-sp-spiders on the web."
— Luna Eclipsed

"Sorry!"
— The Mysterious Mare Do Well

"He ran RIGHT into one of those giant black vines while practicing that speed-up magic of his! I don't think he'll ever learn..."
— Enterplay collectible card game Absolute Discord #43 C card of Comet Tail 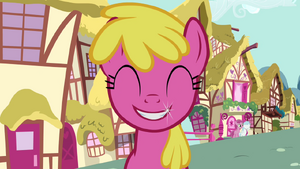 Retrieved from "https://mlp.fandom.com/wiki/Cherry_Berry?oldid=2140056"
Community content is available under CC-BY-SA unless otherwise noted.