My Little Pony Friendship is Magic Wiki
Register
Don't have an account?
Sign In
Advertisement
in: Pages for merging, Pages that need improvement, Earth ponies,
and 3 more
English

Cherry Fizzy, or simply Cherry Fizz, is a male background Earth pony with a brown coat, black mane, light green (sometimes blue) eyes, and a cutie mark of two cherries. He is not named in the show, but he is named in merchandise. He shares his design with Caramel, Golden Delicious, Royal Riff, "Black Stone," S01E02 Unnamed Earth Stallion #1, and "Cormano."

Cherry Fizzy makes appearances throughout the series as a background pony, typically appearing in group and crowd shots with many other ponies. His first appearance is in The Ticket Master in Rainbow Dash's fantasy. He later appears in Boast Busters at Trixie's magic show. He makes similar background appearances in Call of the Cutie, when Applejack and Apple Bloom are selling apples in the marketplace, and Fall Weather Friends, when the Running of the Leaves is about to start.

Cherry Fizzy makes more frequent appearances in Over a Barrel, particularly in the third act when the ponies of Appleloosa are preparing defenses against the buffalo stampede. In The Cutie Mark Chronicles, during Twilight Sparkle's cutie mark story, he delivers to her the egg that Spike would hatch from, and he has a speaking role in the following present-day scene, when he asks Twilight, "Are you okay?"

In Hearth's Warming Eve, Cherry Fizzy shoos Derpy away from the curtains before the pageant starts. Here, he has blue eyes instead of green. He appears with blue eyes again in The Super Speedy Cider Squeezy 6000 and Putting Your Hoof Down. He appears in several wide-angle shots of Ponyville in Hearts and Hooves Day; in one such shot, during The Perfect Stallion, he is seen nuzzling Cherry Berry.

In A Canterlot Wedding - Part 2, Cherry Fizzy serves as one of Shining Armor's aides-de-camp at his wedding to Princess Cadance, alongside Caramel, Noteworthy, and Meadow Song, and as an assistant to Mayor Mare in Magical Mystery Cure during Morning in Ponyville.

Cherry Fizzy appears outside the Golden Oak Library in Too Many Pinkie Pies, watches the Summer Harvest Parade in One Bad Apple, appears in crowds in Magic Duel, and appears as one of Mayor Mare's assistants and at Twilight Sparkle's princess coronation in Magical Mystery Cure.

Cherry Fizzy appears in Power Ponies, has another speaking role in Rarity Takes Manehattan, and also appears in Three's A Crowd, in Pinkie Pride, in Simple Ways, in Filli Vanilli, in It Ain't Easy Being Breezies, in For Whom the Sweetie Belle Toils, in Leap of Faith, in Testing Testing 1, 2, 3, in Trade Ya!, in Equestria Games, and in Twilight's Kingdom - Part 1 and its recap at the beginning of Twilight's Kingdom - Part 2.

In season five, Cherry Fizzy appears as a spectator of the Appleloosa Rodeo in Appleoosa's Most Wanted, attends the Grand Galloping Gala in Make New Friends but Keep Discord, attends Cranky Doodle Donkey and Matilda's wedding in Slice of Life, appears in Ponyville and Dodge Junction in Party Pooped, appears in Ponyville's shared dream in Do Princesses Dream of Magic Sheep?, watches the Sisterhooves Social in Brotherhooves Social, and speaks with Noteworthy before walking with Noi and speaking with Shoeshine during The Pony I Want to Be in Crusaders of the Lost Mark.

In season six, Cherry Fizzy watches the dance recital in On Your Marks, appears in the crowd for Trixie's show in No Second Prances, sings Hearth's Warming Eve Is Here Once Again in A Hearth's Warming Tale, watches the Applewood Derby in The Cart Before the Ponies, appears in the crowd of zom-ponies in 28 Pranks Later, and dances at Gabby's cute-ceañera in The Fault in Our Cutie Marks.

In A Flurry of Emotions, Cherry Fizzy is treated at the Ponyville Hospital by Nurse Redheart. As he says "Ah" during his checkup, Flurry Heart teleports into the room, and looks inside his mouth for her lost stuffed toy. In Parental Glideance, he appears in the stands of the Wonderbolts arena. In Honest Apple, he has a brief speaking role when Rarity asks him if he has heard about Applejack. In Discordant Harmony, he appears as a Ponyville shop cashier. In The Perfect Pear, he makes background appearances walking to a stand at the Ponyville Marketplace and later operating his own cherry stand. In Fame and Misfortune, he appears at Sweet Apple Acres as a member of the "Sweet Apple Admirers" and later in the angry mob outside the Castle of Friendship. In Triple Threat, he appears by Ponyville Town Hall during preparations for Ember's arrival and runs away when she destroys the banner with her fire breath. He later appears attending the Flame of Friendship ceremony for Ember and Thorax. In It Isn't the Mane Thing About You, he makes a background appearance walking in Ponyville. In Secrets and Pies, he appears dining with Shoeshine at a table behind Sugarcube Corner and later attends Pinkie Pie's pie celebration in front of Ponyville Town Hall.

In The Maud Couple, Cherry Fizzy appears as a background character attending Maud Pie's birthday party. In Surf and/or Turf, he appears standing with Daisy Valley at the Ponyville train station and notices Scootaloo collide with a stack of train luggage. In Non-Compete Clause, he makes a background appearance sitting in the School of Friendship courtyard. In The Break Up Break Down, he appears during Hearts and Hooves Day standing with Daisy in Ponyville and later dining with her at the Ponyville Café. In The End in Friend, he appears sitting by himself at a table at the Ponyville Café. In Yakity-Sax, he appears walking through the park before running away upon hearing Pinkie Pie's poor yovidaphone playing, and later appears spectating the Wonderbolts derby in Canterlot, walking with Shoeshine in Ponyville, and attending Applejack's party for Pinkie Pie at Sweet Apple Acres. In The Washouts, he attends the titular group's two Ponyville show and waits in line for autographs after the first one. In A Rockhoof and a Hard Place, he appears as a member of Professor Fossil's archeology team as they try to excavate Rockhoof's old village.

In the special My Little Pony Best Gift Ever, Cherry Fizzy appears in the Ponyville Marketplace during the day before Hearth's Warming standing in the street, getting cider from Wensley and an operating an apple stand. He later appears among many ponies exiting Ponyville Town Hall with White Lightning and an unnamed filly.

In The Beginning of the End - Part 2, Cherry Fizzy appears in the Ponyville Marketplace mind controlled by King Sombra, later following him to Canterlot and confronting the Mane Six at Canterlot's gates. In Common Ground, he appears as a buckball fan doing the wave in the opening newsflash, and later spectates a game at an Appleloosa buckball tournament. In Student Counsel, he appears as a cashier at a party supply store as Starlight Glimmer tries to buy streamers. She teleports out of the store before buying, causing the streamers to fall on his face. In The Summer Sun Setback, he appears in the audience for the final Summer Sun Celebration in Canterlot. In Growing Up is Hard to Do, he appears talking to Sunshower Raindrops in Ponyville as the adult Cutie mark Crusaders race by. He later appears as a passenger on the Friendship Express during Being Big is All It Takes and attending the animal showcase at the Appleloosa County Fair. In The Big Mac Question, he appears in Ponyville with Cherry Berry being frightened by Discord's living apples. In The Ending of the End - Part 1, he makes a cameo appearance moving Princess Celestia's old throne out of the Canterlot Castle throne room as Twilight Sparkle prepares to assume her and Princess Luna's duties as ruler of Equestria. In The Last Problem, he appears attending Twilight's coronation for the aforementioned position with Royal Riff.

Cherry Fizzy is one of many ponies seen in the establishing shot of Ponyville in My Little Pony Equestria Girls: Spring Breakdown.

In the Best Gift Ever short Triple Pony Dare Ya, Cherry Fizzy makes a background appearance operating a cherry stand at the Ponyville Marketplace.

In the comic illustrations of the German magazine story Ein komischer Vogel, an adaptation of the episode A Bird in the Hoof, Cherry Fizzy says the line "Nein, noch nie gesehen!" to the royal guards when they ask him whether he has seen Philomena, whereas the episode's version of the same scene does not feature any dialogue.

Cherry Fizzy appears as a playable character in Gameloft's mobile game, added along with Banana Bliss on April 30, 2014. He has the description "Cherry Fizzy is a caring pony who likes taking charge! No matter what, he'll always have your flank in a sticky situation!"

He appears with blue eyes in the My Little Pony First Look and Find book.

In the Enterplay collectible card game's expansion set Canterlot Nights, #29 C, a card of Cherry Fizzy, lists his name with a trademark symbol, depicts him with blue eyes, and gives him the description "Cherry Fizzy has been friends with Shining Armor since their first day of basic training. He often takes the train to the Crystal Empire when he's on leave."[1]

"Are you okay?"
— To Twilight Sparkle, The Cutie Mark Chronicles

"The line ends back there, buddy!"
— To Rainbow Dash, Rarity Takes Manehattan

"The most honest pony there is? Sure have!"
— Referring to whether he's heard of Applejack, Honest Apple 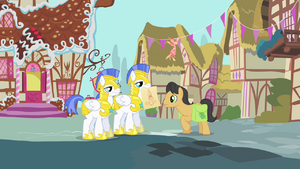