Cherry Gold is the placeholder name of a male background Earth pony who appears in the season four episode Equestria Games. He has a yellow coat, brown mane, green eyes, and his cutie mark is a pair of cherries on their stems. He is unnamed in the series.

Cherry Gold bears a similarity to MandoPony. MandoPony is an original character of musician Andrew Stein, known for producing original and My Little Pony-inspired music and for playing mandolin for William Anderson on a short cue for Magical Mystery Cure[1][2][3][4] that was cut from the final version of the episode.[5] On DeviantArt, artist Sabrina Alberghetti stated in early February 2013 that MandoPony would never be seen "in the show - it's just not possible. Well, I'm sure it could be, but it's not worth the trouble"[4] and later in the same week stated on the same topic that "all it would need is Hasbro approval."[6] On Twitter in late April 2013, comic artist Amy Mebberson pointed out MandoPony's appearance in Friendship is Magic Issue #7 to Stein,[7] who then stated in response "Oh my goodness! What?! When? How?! WHAT ARE WE RUNNING FROM".[8]

In response to Cherry Gold's appearance in Equestria Games, Stein stated on Twitter in early May 2014 "THAT'S NOT MANDOPONY, IT'S ... uh ... um ... o.O ... 'cherry'pony? ... I got nothing"[9] and in early August 2014 "uhh ..." and "I can neither confirm nor deny this pony's identity".[10] On Twitter in January 2015, show director Jim Miller, after stating "We don't put fan OCs in the show",[11] was replied to with a link to the My Little Pony Friendship is Magic Wiki's "MandoPony" article (which at the time treated Cherry Gold and MandoPony as one character), and stated in reply to that "Yeah, that's NOT Mando. It's merely a coincidence. It's bound to happen since a lot of OCs are based on..."[12] "...existing background ponies, and we sometimes recolour incidentals all to fill out crowds. No conspiracy here."[13] Despite implication of these Twitter replies of Miller's, Cherry Gold's design has not been used for another show character.

Cherry Gold appears very briefly in Equestria Games, during the titular event at the Crystal Empire. As the frozen-over cloud descends upon the Games stadium, Cherry Gold is seen as a number of Pegasi fly up to stop it from falling.

MandoPony's appearance in the IDW comics precedes Cherry Gold's appearance in the series. He first appears on cover RI of My Little Pony Micro-Series Issue #2, watching a filly Rainbow Dash fly through the sky alongside MicTheMicrophone and Snowdrop. Here, he has no cutie mark.

He later appears on page 1 of Friendship is Magic Issue #7 alongside Wild Fire, galloping through Ponyville as the town prepares for the invasion of Nightmare Rarity and the Nightmare Forces. Here, he has his cutie mark. 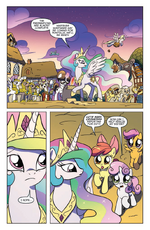 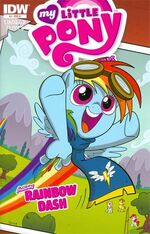 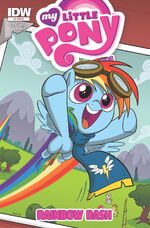 MandoPony
Add a photo to this gallery

Retrieved from "https://mlp.fandom.com/wiki/Cherry_Gold_and_MandoPony?oldid=1840035"
Community content is available under CC-BY-SA unless otherwise noted.