Cherry Jubilee is a female Earth pony who first appears in the season two episode The Last Roundup. She is the owner and boss of Cherry Hill Ranch in Dodge Junction. She is called Cherries Jubilant in some merchandise.

Cherry Jubilee is based on the G1 pony Cherries Jubilee, who resembles "Jubileena". Cherries jubilee is also the name of a dessert dish made with flambéed cherries and ice cream.

Cherry Jubilee's name is listed with a trademark symbol in multiple Hasbro DMCA complaints to Google in late 2012[3][4][5][6][7][8] and on Enterplay's collectible card game cards of her.

In The Last Roundup, Applejack is temporarily hired at Cherry Hill Ranch, a farm in Dodge Junction that is owned by Cherry Jubilee. According to Applejack, she met Cherry Jubilee at her cherry stand at the Equestria Rodeo in Canterlot and warmed up to her because they both worked in orchards. Later in the episode, Cherry Jubilee allows the main characters to help Applejack with farm work.

Cherry Jubilee can be seen sitting next to Fleur de Lis in the Crystal Empire stadium in Equestria Games.

Cherry Jubilee appears in Party Pooped where she helps Pinkie Pie get to Yakyakistan while delivering cherries to the Crystal Empire. The trip becomes derailed when Cherry and her stagecoach pullers fall asleep along the way. Cherry and her companions fall into a ravine but are rescued by the Wonderbolts and dropped off in Manehattan. She also appears in Ponyville at the end of the episode, managing her own booth at the friendship party.

Cherry Jubilee and her farm are mentioned in The Mane Attraction by Svengallop.

Cherry Juiblee's background appearance from during the Yaks' party in Ponyville in Party Pooped reappears in Cakes for the Memories.

Cherry Jubilee appears on page 6 of the My Little Pony: Friendship is Magic Issue #10 story Zen and the Art of Gazebo Repair - Part Deux "If You Only Have a Hammer, You See Every Problem as a Nail", waving to a crowd of ponies from atop a Dodge Junction parade float in Ponyville.

Cherry Jubilee's "secret history" is revealed in My Little Pony: Friends Forever Issue #33. She used to be a member of Buffalo Bull's traveling Wild West show under the stage name "Calamity Mane", and the two fell in love. Buffalo Bull asked her to marry him, but she panicked and ran off, leading Bull to abandon her in Dodge Junction and replace her with another Calamity Mane. When Bull's traveling show returns to Dodge Junction, Cherry almost kicks him out of town out of anger, but with Applejack's help, the two make amends for breaking each other's hearts.

Cherry Jubilee is one of the available playable characters in Gameloft's mobile game, and serves as a boss battle and community helper during the "Rarity's Retro Revolution" event. Her in-game description reads "The owner of Cherry Hill Ranch in Dodge Junction, Cherry Jubilee sometimes needs a helping hoof when sorting cherries on her farm."

The dialogue for the intro to the quest The Ultimate Cherry is "Cherry Jubilee's asked me for help pickin' cherries before, but now she needs our help again. I think we can do that!" The objective of this quest is to raise Cherry Jubilee to 5 stars. The dialogue for the end of this quest is "Yee-haw! It's always a pleasure helpin' out Miss Jubilee!"

Cherry Jubilee is shown next to Applejack on page 163 of Little, Brown's My Little Pony Friendship is Magic official guidebook My Little Pony: The Elements of Harmony.

Cherry Jubilee is featured on an Enterplay collectible card game card, the Gen Con Indy 2013 demo version of which attributes to her the quote "Cherry winks, cherry cheesecake, cherry tarts; if it has cherries in it then we make it here at Cherry Hill Ranch!" and the α #26 F version of which gives her the description "This boss pony thinks sorting cherries is as simple as cherry pie. Some of her sorters may disagree."

"Mark your calendar, missy, 'cause this right here's your lucky day!"
— Party Pooped

"It's mighty kind of you to lend a hoof like this, Applejack!"
— My Little Pony: Friends Forever Issue #33

"Cherry winks, cherry cheesecake, cherry tarts; if it has cherries in it then we make it here at Cherry Hill Ranch!"
— Enterplay collectible card game Gen Con Indy 2013 demo card of Cherry Jubilee 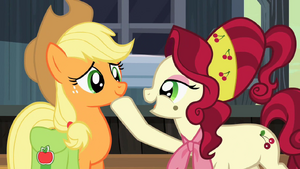