Cherry Spices is a female unicorn pony who appears in Equestria Games, The Cutie Re-Mark - Part 1, On Your Marks, Newbie Dash, The Fault in Our Cutie Marks, Rock Solid Friendship, Parental Glideance, Yakity-Sax, The Washouts, and My Little Pony: Friendship is Magic Issue #9. She has a brown coat, red mane, green eyes, and a cutie mark of two cherries. She first appeared in merchandise.

Cherry Spices, as well as Magnet Bolt, Electric Sky, "Rivet", and Barber Groomsby, was to appear in Boast Busters.[1]

According to Andy Price, "random blind bags" are how Cherry Spices, Sweetcream Scoops, and Sugar Grape, "got into the comic".[2]

Cherry Spices appears in Equestria Games as both a participant in the titular event's opening ceremonies and a spectator in the stadium crowds.

In On Your Marks, Cherry Spices is among the audience members in attendance for the dance recital. In Newbie Dash, she is in the crowd watching Rainbow Dash's performance. In The Fault in Our Cutie Marks, she is watching Tender Taps perform and also appears in the stands of the baseball game. 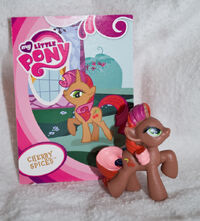