My Little Pony Friendship is Magic Wiki
Register
Don't have an account?
Sign In
Advertisement
in: Humans, Female characters, Celebrities,
and 2 more
English

Chestnut Magnifico is a female human who appears as a supporting character in the Equestria Girls half-hour special Movie Magic. She is a renowned film actress and founder of an organization that helps homeless animals.

Chestnut Magnifico appears in the half-hour special Movie Magic as a world-famous actress cast to play the lead role of Daring Do in Canter Zoom's film. When the Mane Seven are invited onto the film studio lot by A. K. Yearling, Fluttershy and Rarity try to meet her. However, she bursts out of her trailer, furiously yelling at her agent over the phone, "I want this thing shut down!"

Later, at the craft services table, Chestnut explodes in anger when she can't find her imported peanut butter praline crunch bars, dismissive of Canter Zoom's concerns about her soon-to-expire filming contract. As the movie's production suffers from sabotage and prop theft, the Mane Seven initially suspect Chestnut to be responsible after her earlier cellphone conversation and the discovery of a peanut butter praline crunch bar wrapper on one of the sabotaged sets.

After Juniper Montage is discovered to be the true culprit and escorted out by studio security, Chestnut returns in a friendlier mood. Following another phone call with her agent, she reveals that the project she wanted shut down was a documentary about nests that she was uninterested in. As a result, Chestnut is able to extend her contract with Canter Zoom and finish filming the Daring Do movie. At the end of the special, she films the climax of the movie while in the role of Daring Do—with the Mane Seven included as extras.

In the following special Mirror Magic, Chestnut only appears depicted on a promotional movie poster for the film outside the Canterlot Mall movie theater.

In The Canterlot Movie Club, she appears as Daring Do on movie posters inside the theater.

In The Last Day of School, Chestnut appears as Daring Do in footage from Daring Do vs. the Swamp Monster as it is being played for Twilight and Rainbow's final class.

In the second season, she appears as Daring Do on a poster in Rainbow Dash's locker in Run to Break Free and Sock It to Me.

In the segment "Dashing Through the Mall", a standee of Chestnut Magnifico as Daring Do appears in the "Trend of the Line" store at the mall.

Chestnut first appeared dressed as Daring Do in an image directory file on Hasbro's official My Little Pony website.[1]

Chestnut appears in the novelization of the specials, Magic, Magic Everywhere!, her role essentially unchanged from the specials.

When first introduced, Chestnut is portrayed as the typical celebrity diva: snobby, impatient, short-tempered, and demanding. She ignores Fluttershy and Rarity when she try to approach her, slamming her trailer door in Rarity's face at one point. She throws a tantrum when she can't find her favorite peanut butter praline crunch bars while at the same time ignoring Canter Zoom's worries about the movie.

Near the end of her debut, however, Chestnut drops her diva personality and becomes friendly and coy. According to Fluttershy, she is a devoted supporter of a foundation that builds homes for homeless animals.

"I don't care if I'm under contract! This is a joke, and I want this thing shut down! Do you hear me?!"
— My Little Pony Equestria Girls: Movie Magic

"So sorry I'm not in makeup, but I've just gotten a call from my agent. I no longer have to work on that ridiculous documentary about nests next month. Ha-ha! I swear, when they approached me, I thought they wanted to do a documentary about my organization for homeless animals, [laughs] not on various "nests" around the world! Completely misleading! But no matter! That's all behind us!"
— My Little Pony Equestria Girls: Movie Magic

"I don't think so, Stalwart!"
— As Daring Do, My Little Pony Equestria Girls: Movie Magic 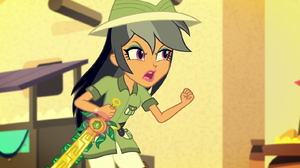