Chief Thunderhooves is the chief of a tribe of buffalo who first appears in the episode Over a Barrel. He leads the buffalo tribe against the settlers of Appleloosa, due to their apple orchards blocking his tribe's traditional stampeding grounds.

Pinkie Pie, Rainbow Dash, and Little Strongheart go to talk to the Appleloosans about the situation, and while Little Strongheart and Braeburn are re-conciliatory, Rainbow Dash and Applejack only worsen the situation. Pinkie Pie then tries putting up a musical number about sharing to the Appleloosans and the buffalo, but Chief Thunderhooves and Sheriff Silverstar declare it's "the worst performance we've ever seen" and announces the buffalo will be stampeding "at high noon tomorrow, and if the orchard is still there, [the tribe will] flatten it and the town."

The next day, Chief Thunderhooves and his tribe stand on a cliff overlooking the settlement, moments before high noon. The clock strikes the hour, but Little Strongheart gently places her hoof on Chief Thunderhooves, and he sighs resignedly. For a moment, the ponies sigh in relief that the buffalo aren't going to charge, but then Pinkie Pie sings her song again, which angers Chief Thunderhooves. He commands the buffalo to charge, and they destroy the armament made for the battle, as well as several buildings. The battle ends when the chief is brought down by a stray apple pie, which the Appleloosans were using as ammunition. He tastes it and enjoys it, and decides that the buffalo will allow the apple orchard to stay in exchange for a share of the apple pies. A path is cut down through the orchard and the buffalo stampede through it with their apple pies. Chief Thunderhooves makes amends with the Appleloosans, nods a goodbye to Braeburn and Sheriff Silverstar, and runs into the distance with the rest of the buffalo.

Chief Thunderhooves makes a brief cameo at the beginning of Pinkie Pride during the Appleloosa party Cheese Sandwich throws for them. In The Ending of the End - Part 2, Thunderhooves takes part in the final battle against Queen Chrysalis, Lord Tirek, and Cozy Glow.

Chief Thunderhooves is mentioned as Little Strongheart's father in her bio, and was added as a playable character in update 5.5, serving as a boss during the "Convocation of the Creatures!" event. His bio states, "This respected buffalo leader -- and Little Strongheart's dad -- has long been a staunch advocate of his tribe's grazing and stampeding rights." 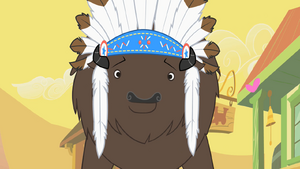 Retrieved from "https://mlp.fandom.com/wiki/Chief_Thunderhooves?oldid=2158935"
Community content is available under CC-BY-SA unless otherwise noted.