Start a Wiki
Claude is a male unicorn pony and puppeteer who appears in the episodes Inspiration Manifestation and Forever Filly. He is referred to by name only in the season four episode's end credits, in merchandise, and in other media.

According to Jayson Thiessen, "The puppeteer's design was inspired by the voice. When I heard the audition I just had to draw a sketch #MLPSeason4".[1] According to Jim Miller on July 13, 2015, Claude and Snips aren't father and son.[2] On March 31, 2016, Nick Confalone jokingly tweeted about Claude and The Gift of the Maud Pie.[3]

Claude appears in Inspiration Manifestation as a puppeteer for the Ponyville Foal and Filly Fair. Rarity builds him a lavish puppet theater with which to put on his puppet show, but he expresses great displeasure for the theater due to its lack of mobility and room for his puppets. His disapproval sends Rarity into a deep depression.

When Rarity, under the influence of the Inspiration Manifestation spell, returns to Claude with a new, more functional puppet theater, he approves of it greatly. He is impressed by Rarity's ability to produce a better theater in such a short amount of time.

Claude and his puppets appear in Forever Filly.

Claude the Puppeteer is a character in Gameloft's mobile game. The game's description of him states, "This top-hatted unicorn is one to watch out for..."

Claude appears on the season 4 poster. In the Crystal Games expansion set of Enterplay's collectible card game, card #195 UR of Claude gives him the description "After years of spending more time with puppets than ponies, Claude has become a bit of a control freak."

"This is awful!"
— Inspiration Manifestation

"And completely unusable. Hmmm... Ugh! It doesn't travel! Oh, there's no room for my puppets! It appears I won't have a traveling puppet theater to use after all."
— Inspiration Manifestation

"Ah, Miss Rarity, come to see the show, I presume? You'll notice I had to make do in light of your recent failure to produce a functioning theater."
— Inspiration Manifestation 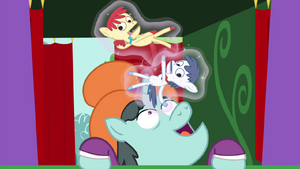 Retrieved from "https://mlp.fandom.com/wiki/Claude?oldid=2110107"
Community content is available under CC-BY-SA unless otherwise noted.