Clear Sky and Wind Sprint are a unicorn mare and Pegasus filly respectively who appear in the season nine episodes Common Ground and The Last Problem. Clear Sky is a single mother and Quibble Pants' girlfriend, and Wind Sprint is her sports-loving daughter.

For Clear Sky and Wind Sprint's designs, Meredith Salenger and Alice Oswalt were consulted on "the kinds of ponies they wanted to be and they suggested their characters' colour schemes", and the "design team looked a[sic] photos of Alice to try and capture her look in pony form", including Oswalt's real-life freckles.[1][2]

Clear Sky and Wind Sprint appear in Common Ground attending the buckball tournament in Appleloosa with Quibble Pants. Quibble and Clear Sky are presented as a loving boyfriend and girlfriend, but Clear Sky's daughter Wind Sprint disapproves of their relationship. Quibble spends a great deal of time and effort trying to bond with Wind Sprint over sports, despite Clear Sky's insistence that he does not need to try so hard.

Unfortunately, Quibble is very non-athletic and does not know anything about sports. This drives an even wider wedge between them when he causes them to lose an exhibitionary buckball match against Pinkie Pie, Fluttershy, and Snails. It is later revealed that Wind Sprint resents Quibble because she believes he is trying to replace her absent birth father. When asked why she even likes Quibble to begin with, Clear Sky says she appreciates how kind and smart he is and how much his friends care about him.

After Clear Sky makes it clear to Wind Sprint that Quibble is not trying to take her father's place (and Quibble admits to his lack of sports knowledge), Wind Sprint decides to give him a chance. In the end, the two of them are able to finally bond as she teaches him about the sport of buckball and he explains various buckball plays and statistics for her.

In The Last Problem, Clear Sky and Wind Sprint attend Twilight Sparkle's coronation ceremony with Quibble Pants. They also briefly appear in a group shot during The Magic of Friendship Grows.

Clear Sky: When it comes to describing your special somepony, a little exaggeration's normal. [to Quibble Pants] And I feel the same way about you.

Wind Sprint: You're Rainbow Dash? The Wonderbolt? Whoa, my dad was a great flyer, too.

Clear Sky: I guess even sportsponies agree. Quibble's a pony you like more and more over time.
Wind Sprint: Ugh. Knowing sportsponies isn't the same as being one.

Wind Sprint: You're not a sportspony! It's not fun playing this game with you!

Wind Sprint: Why do you like him?
Clear Sky: Because he's kind, and smart, and his friends certainly seem to care about him, which is always a good sign.
Wind Sprint: I don't care how many ponies care about him. They're not gonna make me forget about Dad.

Clear Sky: You better watch out, or you're gonna start to like books.
Wind Sprint: I guess that wouldn't be so bad. 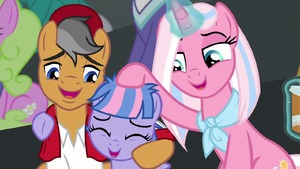 Retrieved from "https://mlp.fandom.com/wiki/Clear_Sky_and_Wind_Sprint?oldid=2152839"
Community content is available under CC-BY-SA unless otherwise noted.