My Little Pony Friendship is Magic Wiki
Register
Don't have an account?
Sign In
Advertisement
in: Pages suggested for splitting, Pages that need improvement, Pegasus ponies,
and 4 more
English

Not to be confused with Band Pony.

The female Cloud Chaser has a similar, albeit slightly darker, color scheme to Flitter. She has a Persian blue coat, light blue mane and tail with white highlights, pink eyes, and a cutie mark sometimes of a shooting star and other times of a sun and cloud. She is alternatively called Cloudchaser (spelled as one word) and Stormwalker in other media.

The male Cloud Chaser has a dark gray coat, two-tone light blue mane and tail, deep blue eyes, and a cutie mark of a gray wing. Unlike the female Cloud Chaser, he is unnamed in the series, uncredited in It Ain't Easy Being Breezies, but he is named in merchandise.

Female Cloud Chaser has a mane style seen on either one or no other pony. She shares her coat and eye colors, and sometimes cutie mark, with Cloud Kicker, and usually has a cutie mark similar to those of Stardash and Friends Forever 15 Unnamed Mare - Shooting Star.

Male Cloud Chaser bears a resemblance to Thunderlane and 8-bit.

Regarding the female Cloud Chaser, a DHX layout artist wrote in late May 2013 "The name for the pegasus in our files at the studio is in fact Stormwalker, so how did she become Cloudchaser in the show? Well, in the script for Hurricane Fluttershy, there was both a Cloudchaser and Stormwalker. Stormwalker was cut before storyboards, and Cloudchaser was never designed. The storyboard artists used the Stormwalker design in the scenes where Cloudchaser was in the script and I posed them out in layout." The name Stormwalker is used for Cloud Chaser in Little, Brown's My Little Pony Friendship is Magic official guidebook My Little Pony: The Elements of Harmony,[3] but is mentioned as not being her name in her quote on her Enterplay collectible card game card's Gen Con Indy 2013 demo version,[4] α #11 R version, and #Pƒ14 version.[5][6][7][8]

The female Cloud Chaser first appears in Hurricane Fluttershy holding one of Rainbow Dash's flyers in her mouth while Flitter reads the flyer aloud. She attends the meeting and appears later stretching, standing upside down. Rainbow compliments her on her flexibility.

She has a hard time understanding Twilight Sparkle's explanation of measuring flight power but understands when Spike explains it simply. After Thunderlane's flying performance, she pets his mane. She prepares for flight and is seen putting on her goggles before she heads into the hurricane with the others. Cloud Chaser later compliments Fluttershy after landing. Her cutie mark changes during this scene.

Cloud Chaser appears as a cadet in Wonderbolts Academy, in which she is easily intimidated by Spitfire: when put on the spot, she denies she thinks she can be an elite flier. During her training, she is partnered with Bulk Biceps, serving as the lead pony in the duo; the two end up stuck in clouds due to Lightning Dust's risky actions. Later, Cloud Chaser saves Fluttershy from falling and becomes visibly annoyed when Fluttershy remembers she can fly too.

Cloud Chaser appears in Apple Family Reunion in the crowd at the beginning of the song Raise This Barn. She appears again in Magical Mystery Cure, during Life in Equestria, alongside Flitter.

Cloud Chaser and Flitter are seen again in the season four episode Rainbow Falls. They appear as fillies in Cheese Sandwich's flashback in Pinkie Pride. Drawings in Testing Testing 1, 2, 3 use Cloud Chaser's design.

In Equestria Games, she and Flitter are two of the Pegasi attempting to prevent the icy cloud from crashing into the stadium.

In Slice of Life, Cloud Chaser appears next to Flitter at Cranky Doodle Donkey and Matilda's wedding. In Party Pooped, she appears as one of the Wonderbolts who rescue Pinkie Pie and Cherry Jubilee when their stagecoach falls into a ravine. In The Mane Attraction, she helps Rainbow Dash set the stage for Coloratura's performance. She and Flitter appear in the crowd during Friends Are Always There For You in The Cutie Re-Mark - Part 2.

In No Second Prances, Cloud Chaser briefly appears flying with Warm Front. In Parental Glideance, she appears as a filly in Rainbow Dash's flight school flashback.

In She's All Yak, Cloud Chaser appears in the reused image of The Cutie Re-Mark - Part 2 during Fit Right In.

Cloud Chaser appears in a flashback of Apple Family Reunion during Raise this Barn in Harvesting Memories.

The male Cloud Chaser's only appearance in the series thus far is in It Ain't Easy Being Breezies. He is one of the Pegasi, alongside Rainbow Dash and Flitter, tasked with helping the Breezies on their journey home.

During the establishing shot of Ponyville in the film My Little Pony Equestria Girls: Rainbow Rocks, female Cloud Chaser is one of the Pegasi who flies over the town square.

Female Cloud Chaser is listed with her studio file name Stormwalker in Little, Brown's My Little Pony Friendship is Magic official guidebook My Little Pony: The Elements of Harmony.[9]

In the chapter book Discord and the Ponyville Players Dramarama, female Cloud Chaser and Flitter help Rainbow Dash create some weather effects for the community musical.

Female Cloud Chaser is a playable character in Gameloft's mobile game. Her in-game description states, "A proud member of the Wonderbolts Academy, Cloud Chaser earned her cadet honors in no time. Her willingness to protect her fellow ponies more than shows her bravery!"

A figurine of female Cloud Chaser was released in the fifth wave of Hasbro POP figures with stickers. The figurine's packaging names Cloud Chaser with a trademark symbol.

Series 2 of Enterplay's trading cards includes a Flitter & Cloudchaser card, #17. The back of the card shows their names both with trademark symbols, lists Thunderlane, Rumble, and Bulk Biceps as friends, and states "Flitter and Cloudchaser's accelerative velocity translates into an excellent cumulative H2O antigravitational potential. Which, in English, means these two can really fly! These two fun-loving pegasi[sic] are longtime friends with fellow flyer Thunderlane, and they love foalsitting his little brother Rumble. Cloudchaser has recently been seen at the Wonderbolts Academy, but does she have what it takes to join such elite fliers? Good luck, Cloudchaser!"

Female Cloud Chaser also appears with her name spelled as "Cloudchaser" with a trademark symbol in Enterplay's collectible card game, in which she mentions the name Stormwalker as not being her name on her card's Gen Con Indy 2013 demo version,[4] α #11 R version, and #Pƒ14 version.[5][6][7][8]

"What exactly does this machine do?"
— To Twilight Sparkle, Hurricane Fluttershy

"Yeah, we couldn't have done it without you!"
— To Fluttershy, in Hurricane Fluttershy

"Eh, you might want to check the wall."
— To Rainbow Dash, Wonderbolts Academy

"Clouds are nice and all, but why didn't my parents name me something cool, like Stormwalker? Now THAT'S a name."
— Enterplay collectible card game card of Cloudchaser, Gen Con Indy 2013 demo version, α #11 R version, and #Pƒ14 vesion

"They're too far back! We can't connect the breeze to both sets of Breezies!"
— To Rainbow Dash, It Ain't Easy Being Breezies

"Neither can I!"
— It Ain't Easy Being Breezies 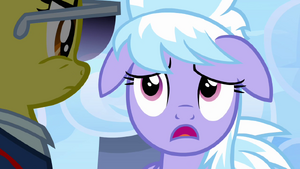