Cloud Kicker is a female Pegasus pony with a lavender blue coat, jasmine mane and tail with a lemon chiffon streak, orchid eyes and a cutie mark of a cloud covering a sun. She shares her design with Merry May, shares her mane style with Lily Valley, and bears a resemblance to "Cloudy Kicks",[note 1] "Lavender Lace", and Lily Blossom. She is unnamed in the show, but she is named in merchandise and other media.

Cloud Kicker frequently appears in Ponyville and Cloudsdale as a background pony.

Her debut in the series is in Friendship is Magic, part 1, when she and other ponies yell "Surprise!" at Pinkie Pie's surprise party for Twilight Sparkle.

Cloud Kicker appears in Ponyville's marketplace twice in Griffon the Brush Off. She is standing behind a vegetable stand, while Derpy and Merry May are standing in front of it. They are greeted by Pinkie Pie, who asks if they have seen Rainbow Dash. Later, she appears near Sugarcube Corner, eyes askew, after Gilda roars and scares away Fluttershy.

In the episode Winter Wrap Up, Cloud Kicker is a member of the weather team. She is part of the group that Rainbow Dash sends to retrieve the southern birds, but she is absent in the scene where Rainbowshine returns to report that Ditzy Doo accidentally went north to get the southern birds. She is spotted on the ground arguing with the ponies almost immediately afterward, however.

Cloud Kicker appears quite frequently in the episode Hurricane Fluttershy. She and the other Ponyville Pegasi successfully create the tornado that transports water to Cloudsdale. In the episode Ponyville Confidential, a picture printed by the Foal Free Press shows Cloud Kicker without wings.

In One Bad Apple, during the song Babs Seed, Cloud Kicker sits with Dr. Hooves in a movie theater. She also appears at the Wonderbolt Academy in Wonderbolts Academy.

Cloud Kicker also appears in Pinkie Pride, Simple Ways, Filli Vanilli, It Ain't Easy Being Breezies, For Whom the Sweetie Belle Toils, Leap of Faith, Trade Ya!, and Inspiration Manifestation. In Equestria Games, she competes the final leg for her team in the aerial relay, and finishes outside of the medals. She later appears in Twilight's Kingdom - Part 1 and Twilight's Kingdom - Part 2.

In Tanks for the Memories, Cloud Kicker appears among other Pegasi moving clouds in preparation for winter. She buys a cupcake from Pinkie Pie in Make New Friends but Keep Discord, attends Cranky Doodle Donkey and Matilda's wedding in Slice of Life, appears at the Grand Equestria Pony Summit in Princess Spike, attends the friendship party in Party Pooped, appears in Ponyville's shared dream in Do Princesses Dream of Magic Sheep?, and takes part in the Sisterhooves Social with "Princess Erroria" in Brotherhooves Social. In The Mane Attraction, she appears at Sweet Apple Acres during preparations for the helping Hooves Music Festival and later attends Coloratura's concert later that night at the festival. In The Cutie Re-Mark - Part 1, she appears as a foal spectating the race between Rainbow Dash and the Boy Bullies in past Cloudsdale when Twilight Sparkle and Spike travel through time to stop Starlight Glimmer from changing the past. In The Cutie Re-Mark - Part 2, she appears in the crowd of ponies during Friends Are Always There For You.

In No Second Prances, Cloud Kicker appears in the park talking to Sassaflash and later appears in attendance for Trixie's magic show. In A Hearth's Warming Tail, she appears decorating Ponyville for Hearth's Warming Eve before entering the Castle of Friendship with Big McIntosh and White Lightning during Hearth's Warming Eve Is Here Once Again. In The Cart Before the Ponies, she spectates the Ponyville Applewood Derby during Derby Racers. In The Fault in Our Cutie Marks, she appears during Find the Purpose in Your Life watching Gabby play baseball and later attending Gabby's cute-ceañera. In Where the Apple Lies, she makes a background appearance in a flashback attending a surgery lecture at the Ponyville Hospital. In Top Bolt, she makes a background appearance at the Wonderbolt Academy as a trainee.

In The Perfect Pear, Cloud Kicker makes a background appearance at the Ponyville marketplace at Rainbow Stars' honey stand with Princess Errotia. In Fame and Misfortune, she talks to Mane Moon at a bookstore in Cloudsdale and later appears in the mob of arguing fan ponies outside the Castle of Friendship. In Triple Threat, she attends the Ceremonnial Dragon Fire Flame of Friendship ceremony for Ember and Thorax. In It Isn't the Mane Thing About You, she appears at the Ponyville Marketplace in the line of customers for May Day flowers.

In School Daze - Part 1, Cloud Kicker makes a cameo appearance flying away from the School of Friendship during the school's "Friends and Family Day" after Ocellus approaches it transformed into a giant insect monster. In Yakity-Sax, she makes a background appearance approaching Ponyville Town Hall with White Lightning. In A Rockhoof and a Hard Place, she appears in a line entering Mage Meadowbrook's a home, now an herbal clinic. In Sounds of Silence, she makes a background appearance flying away from the Castle of Friendship at the beginning of the episode.

In the special My Little Pony Best Gift Ever, she appears in the crowd around Flim and Flam's stand at the Rainbow Falls Hearth's Warming Craft Fair, later leaving after their scam is exposed and chasing them out of Rainbow Falls. She later appears flying out of Ponyville Town Hall with Star Hunter during The True Gift of Gifting.

In Between Dark and Dawn, Cloud Kicker appears watching a performance of the musical Wicked during Lotta Little Things. In A Trivial Pursuit, she makes a background appearance flying over Ponyville. In The Summer Sun Setback, she appears in the audience for the final Summer Sun Celebration in Canterlot. In She Talks to Angel, she appears walking around the Ponyville and later standing in front of a honey stand at the Ponyville marketplace. In Dragon Dropped, she appears in front of an apple cart near Sugarcube Corner. In Growing Up is Hard to Do, she appears lfying through the Appleloosa County Fair with Parasol. In The Big Mac Question, she appears walking in Ponyville hearing Apple Bloom's echo. In The Ending of the End - Part 2, she appears in Cloudsdale when the pegasi close themselves away from the other pony tribes and later participates in the final battle against Lord Tirek, Queen Chrysalis, and Cozy Glow.

In My Little Pony Equestria Girls: Spring Breakdown, Cloud Kicker makes a background appearance flying over the Castle of Friendship with Sunshower Raindrops.

Cloud Kicker is a character named "Determined Shopper" in Gameloft's mobile game. Her in-game description states, "This pony takes the Rainbow Falls Craft Fair one aisle at a time, leaving no stall unexamined."

Cloud Kicker mini-figure toy and collector card pairs are included in the seventeenth and twenty-third waves of mystery packs. The first pair is of her wearing part of her Nightmare Night costume. The collector cards name Cloud Kicker with a trademark symbol and respectively state, "She loves sunny days!" and "She races through the sky with friends." 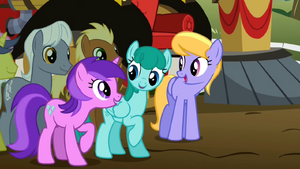