Cloudsdale is the mobile cloud city located in the skies northwest of Canterlot and Ponyville[1] and the hometown of Rainbow Dash and Fluttershy. It is featured prominently in Sonic Rainboom, briefly in The Cutie Mark Chronicles, and in Tanks for the Memories. The name's suffix, "dale", is an old word for a valley or open river valley, but the name is also a play on the Clydesdale breed of horse. The city's buildings and general design take cues from Greek culture, which is appropriate as the myth of Pegasus originated from Greek mythology.

According to Lauren Faust, the name "Cloudsdale" was originally suggested by her husband Craig McCracken.[2]

A summer flight camp in Cloudsdale is the scene for Rainbow Dash's and Fluttershy's childhood flashbacks in The Cutie Mark Chronicles. In the flashbacks, Rainbow Dash stands up to some bullies who are making fun of Fluttershy's weak flying. Rainbow Dash challenges the bullies to a race, and at the beginning of the race, Fluttershy is accidentally knocked off a cloud and plummets to the ground. Her life is saved when she lands safely on a swarm of butterflies. Fluttershy gets her cutie mark when she realizes how much she loves the animals living on the earth below. Rainbow Dash's flashback includes the rest of the race. When she is winning, she realizes she loves speed and "winning". She miraculously performs a sonic rainboom and gets her cutie mark.

Spitfire briefly mentions Cloudsdale in The Best Night Ever after spotting Rainbow Dash, commending her for her actions in Sonic Rainboom.

In The Return of Harmony Part 1, Discord shows Rainbow Dash a vision of Cloudsdale's destruction before brainwashing her. She then accepts his offer to restore her wings and then abandons her friends, believing that she is needed in Cloudsdale. In The Return of Harmony Part 2, Twilight and her friends find the grayed out Rainbow loafing on a single cloud she appears to think is Cloudsdale.

Hurricane Fluttershy portrays the annual task of delivering water to Cloudsdale, in order for the weather factory to produce the year's rain clouds for all of Equestria. When Ponyville is chosen for the year's delivery, Rainbow Dash and the town's other Pegasi must funnel water from Ponyville's reservoir by creating a tornado. Fluttershy is reluctant to help at first, on account of her weak flying skills and the taunting she endured at Cloudsdale's flight camp (as seen in a flashback). However, she eventually joins in the effort and delivers the final push needed to get the water to Cloudsdale.

Cloudsdale appears in Rainbow Dash's flashback in Games Ponies Play as Fillydelphia is announced as the location to host the Equestria Games.

In Magical Mystery Cure, after Twilight accidentally switches her friends' cutie marks, Fluttershy nearly moves back to Cloudsdale because she is unable to make ponies laugh.

The Wonderbolts act as the delegates of Cloudsdale for the Equestria Games tryouts in Rainbow Falls, with Spitfire offering Rainbow Dash a spot on their team, due to her growing up in Cloudsdale, after Soarin is forced to drop out due to an injury.

In the Equestria Games episode, the Cloudsdale team wins gold in the Games' aerial relay event. Spike offers to sing the town's anthem in celebration, thinking he would be singing Ponyville's anthem and, because he is unfamiliar with the song's lyrics, awkwardly improvises them on the fly.

In Tanks for the Memories, the city of Cloudsdale travels to Ponyville so that Ponyville can set up for winter. Cloudsdale appears in the background multiple times as several Pegasi ship snow-filled clouds for the coming winter. In order to stop winter and keep Tank from hibernating, Rainbow Dash sneaks into the weather factory and attempts to shut the winter lab down. Unfortunately, she causes the lab equipment to malfunction, forcing snow clouds to be made much faster. A factory ends up launching a giant snowball onto Ponyville and distributing snow across the town, making winter in Ponyville start earlier than usual.

In The Cutie Re-Mark - Part 1, Starlight Glimmer uses Star Swirl the Bearded's time travel spell and goes back in time to when Rainbow Dash performed her first sonic rainboom at Cloudsdale Flight Camp. She prevents Rainbow from performing the rainboom, creating several alternate timelines. Twilight and Spike follow Starlight to past Cloudsdale and stop her from doing so.

In Flutter Brutter, Fluttershy's parents Mr. and Mrs. Shy invite her and Rainbow Dash to lunch at their home in Cloudsdale. Unfortunately, the lunch gets crashed by Fluttershy's brother Zephyr Breeze, who moves back with his parents after dropping out of mane therapy school. After moving in with Fluttershy and returning to finish school, Zephyr moves back in with his parents for a few days.

Cloudsdale appears in the episode Parental Glideance, both in the present day when Scootaloo goes there to meet Bow Hothoof and Windy Whistles, and in flashbacks to Rainbow Dash's childhood. Cloudsdale political office elections are also mentioned in the Ponyville Chronicle at the beginning of Daring Done? In Once Upon a Zeppelin, the zeppelin cruise flies past Cloudsdale, where Iron Will correctly points out Twilight's past tour of the weather factory.

In The Ending of the End - Part 2, the actions of Queen Chrysalis, Lord Tirek, and Cozy Glow cause many Pegasi to take shelter in Cloudsdale. They create a cloud wall to cut off the city from outsiders, and initially refuse to help the other ponies when the windigos appear. However, Hyper Sonic is able to rally them to join the final battle against the three villains.

In My Little Pony Equestria Girls: Friendship Games, Cloudsdale appears in one of the dimensional rifts opened by Midnight Sparkle.

In My Little Pony Annual 2013, the human Rainbow Dash states that she and Fluttershy attended Cloudsdale Junior High together.

In My Little Pony: Friendship is Magic Issue #19, a sheet of paper on page 3 reads "Cloudsdale in ruin", referring to the Cloudsdale of an alternate universe.

In My Little Pony: Friends Forever Issue #18, "[Rainbow] Dash is excited to go to the Cloudsdale school reunion-but Fluttershy is harboring some bad memories and fears!"[3]

In Gameloft's mobile game, Cloudsdale is shown on the world map.[4] 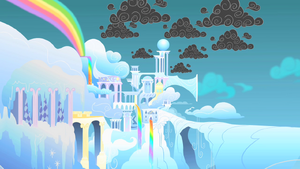