Spring Step and Lilac Sky are two female Pegasus ponies who appear in Rainbow Falls as cheerleaders for the Equestria Games qualifying team representing Cloudsdale. They are unnamed in the show, only collectively referred to as "Cloudsdale Cheer Ponies" in credits, but they are named individually in merchandise and other depictions.

Spring Step and Lilac Sky share their design and cutie mark with each other.

Spring Step and Lilac Sky first appear in the season four episode Rainbow Falls as cheerleaders for the Cloudsdale qualifier team for the Equestria Games. Pinkie Pie is impressed by their outfits, and their cheering causes Soarin to get distracted and nearly crash during practice. Near the end of the episode, they cheer on the Ponyville team as well.

Spring Step and Lilac Sky are both named on a Cloudsdale High "School Spirit Award" plaque on My Little Pony: Friends Forever Issue #18 cover A.

Spring Step and Lilac Sky appear on page 121 of The Wonderbolts Academy Handbook. While Spring Step is named, Lilac Sky is referred to as "Cloudsdale Cheerleader #1".

In the Crystal Games expansion set of Enterplay's collectible card game, Spring Step is named on card #73 F, which gives her the description "Spring Step is a double threat: she's one of the Wonderbolts cheerleaders AND she designed their Equestria Games uniforms!"

"Give us some clouds! Give us some dale! And what do you get? Cloudsdale! Woo-hoo!"
— Rainbow Falls

"We love cheering at competitions! But we don't compete with one another, though. Not really. Well, maybe. Sometimes. Go, Cloudsdale!"
— Cloudsdale Cheerleader #1, The Wonderbolts Academy Handbook 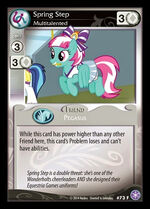 Retrieved from "https://mlp.fandom.com/wiki/Cloudsdale_Cheer_Ponies?oldid=1855690"
Community content is available under CC-BY-SA unless otherwise noted.