Coco Pommel, or Miss Pommel, is a female Earth pony and supporting character who first appears in the season four episode Rarity Takes Manehattan. She is a Bridleway dressmaker and Suri Polomare's former assistant.

Coco is an Earth pony with an off-white coat and two-tone blue mane and tail. She has a similar color scheme to "Cultivar". She wears a white-bordered lavender sailor collar with a scarlet tie and a tri-shade hair clip in the back of her mane. Her cutie mark is a lavender floppy hat with a scarlet feather. Her name is a reference to Coco Chanel,[2] a famous French fashion designer and iconic perfumer. The word "pommel" is a term for the front of a saddle, also commonly known as the "swell" in the West.

On April 3, 2014, the official Facebook page of Gameloft's mobile game was asked regarding the game's addition of Trenderhoof, Astro Pony, and Richard the Hoovenheart "pretty random selection if you ask me, why not Coco Pommel?" and responded "Well, Coco Pommel is a nice idea too. We'll keep that in mind."[3]

In mid-May 2015, IDW's Bobby Curnow stated regarding My Little Pony: Friends Forever "I think characters like Cheese and Coco are ripe for FF... neither have been pitched though, if I recall correctly."[4]

Prior to the airing of The Saddle Row Review, her name in official material was changed to "Miss Pommel" due to legal reasons.[5]

Coco is employed by Suri Polomare as her assistant during Rarity Takes Manehattan and accompanies her during Manehattan's Fashion Week. She is responsible for making the dresses; after Suri copies Rarity's designs and her fabric, she tasks Coco with making the dresses.

Coco is depicted as a soft-spoken and somewhat shy pony. She is routinely put down by Suri, especially when she remarks that Coco almost got her disqualified when remaking her dresses with Rarity's fabric—Coco defends herself stating she was simply trying to make sure Suri would win. Throughout the episode, she unwillingly backs up Suri's comments and lies towards Rarity and her friends.

Coco appears near the end of the episode and presents Rarity with her trophy from Fashion Week. She explains that Suri lied to Rarity and her friends about her losing in the hope that she would win by default should Rarity’s absence be counted as a forfeit. She also says that working with Suri for so long gave her the impression that it "really is everypony for herself" in Manehattan. However, after seeing the generosity Rarity showed to her friends and the generosity they reciprocated, she realized that there is more for her out there, so she quit her job as Suri's assistant. She then presents Rarity with a small gift of a spool of rainbow-colored thread as a thank you.

Rarity offers Coco a job with her friend to make all the costumes for his next show, to which Coco exhibits a subtle excitement. She is last seen waving her new friends goodbye at the Manehattan train station.

In the episode Equestria Games, Coco Pommel appears in the stadium crowd during the opening ceremony of the titular event.

Coco makes a cameo during Let the Rainbow Remind You in Twilight's Kingdom - Part 2.

In Made in Manehattan, Miss Pommel posts flyers around Manehattan asking for volunteers to help put together the Midsummer Theater Revival, an event that she states that she loved participating in when she was a filly. She receives some help in the form of Rarity and Applejack, who were summoned to Manehattan by the Cutie Map.

In The Saddle Row Review, Rarity hires Miss Pommel as a salespony for her Manehattan boutique, but she comes down with a cold, preventing her from working during the grand opening.

In The Last Problem, Coco briefly appears in Rarity's group shot during The Magic of Friendship Grows.

In My Little Pony The Movie, Coco Pommel appears during We Got This Together and in the ending behind Capper while Rarity gives him a top hat and cloak.

Coco Pommel is a playable character in Gameloft's mobile game. Her in-game description states, "A talented seamstress inspiring the fashionistas of Equestria, Coco Pommel knows how to stirrup a buzz with her majestic dress designs!"

Coco Pommel appears on page 11 of My Little Pony: Friendship is Magic Issue #23 under the control of kelpie magic. In Issue #64, she appears as the manager of her own Manehattan boutique, and she helps Rarity re-imagine her old fashion designs to match the current trends. In Issue #95, Coco appears on pages 15 and 18 watching Pinkie Pie and Cheese Sandwich's comedy act.

In My Little Pony/Transformers Issue #1, Coco appears on pages 11-12 forced into servitude by the Decepticon Starscream after Queen Chrysalis brings the Autobots and Decepticons of Transformers to Equestria.

Coco appears in the audience for opening night of The Singing Stallion in Discord and the Ponyville Players Dramarama.

MISS POMMEL is a talented seamstress. Rarity's generosity inspires her to quit her job with Suri Polomare, a cruel and scheming Manehattan designer, and branch out on her own.

In merchandise, Coco Pommel is named "Coco Pommel" and "Miss Pommel" interchangeably, each with a trademark symbol. A Fashion Style brushable toy of Coco Pommel was displayed at the 2015 New York Toy Fair. An articulated poseable toy under the name "Miss Pommel" was released in the Explore Equestria toy line.

Coco Pommel appears on the fan-designed WeLoveFine T-shirt "I Heart Coco" and is shown on Acidfree's first art print.[6]

"Mind if I join you?"
— To the Mane Six, Rarity Takes Manehattan

"I've worked for Suri for so long, I started to believe that it really is everypony for herself in this town. Until I saw how generous you were with your friends and how generous they were with you. It made me start believing there was something better for me out there."
— To Rarity, Rarity Takes Manehattan

"Oh, I don't wear boots. I find they chafe my calves when I walk."
— To Applejack, Made in Manehattan

"I get my fashion inspiration from all of my colorful Manehattan friends."
— My Little Pony Facebook post[7] 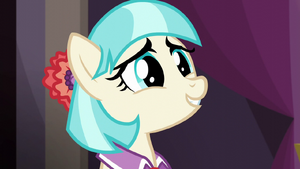