Coloratura, nicknamed Rara and stage-named Countess Coloratura, is a female Earth pony and supporting character who appears in the season five episode The Mane Attraction and the season nine episode The Last Problem. She is a famous pop singer in Equestria and a childhood friend of Applejack's.

Episode writer Amy Keating Rogers came up with the name "Countess Coloratura" specifically because she wanted her name to have a title and musical reference.[2]

"Coloratura" is an Italian musical term that refers to the elaborate arrangement of a vocal melody, particularly in opera.

Coloratura appears in The Mane Attraction, described by Pinkie Pie as "the biggest pony pop star in all of Equestria". As a filly, she met and befriended Applejack at Camp Friendship; Applejack gave her the nickname "Rara" (shortened from Coloratura), and they wrote the song Equestria, the Land I Love together. Some time later, Coloratura moves to Manehattan in order to become famous, and she and Applejack communicate via letter before eventually losing touch.

In present day, Coloratura has grown up to become a pop singer under the stage name "Countess Coloratura". She travels to Ponyville with her manager Svengallop and "Hot Pony"[3] backup dancers to perform in the Helping Hooves Music Festival. Through the guidance of her manager, Coloratura has become somewhat of a diva who has high standards and only greets other ponies with hoof-shaped autograph stamps. However, she loves doing charity work and meeting school foals at each event she attends.

Applejack learns that Coloratura's changes are the result of her manager Svengallop, who exploits her stardom and intimidates other ponies from behind the scenes. When she tries to talk to Coloratura about it, Coloratura takes offense, and the two have a mild falling-out. Determined to make her old friend realize the truth, Applejack sets Svengallop up to expose his true nature, and an appalled Coloratura finds herself abandoned by him.

At the end of the episode, Coloratura learns to embrace her true self and sings The Magic Inside in front of a large audience of ponies. To show her gratitude to Applejack, she also sings a reprise of Equestria, the Land I Love with the Cutie Mark Crusaders.

In the season seven episode Rock Solid Friendship, Rarity collects some valuable gems for Coloratura's album release party. She is also mentioned at the beginning of Honest Apple.

In the season nine episode The Last Problem, Coloratura is featured on the front page of the Foal Free Press, and she briefly appears in Applejack's group shot during The Magic of Friendship Grows.

Countess Coloratura is mentioned in chapter 13 of Discord and the Ponyville Players Dramarama, "Discord's Secret Debut". Her mention in the book precedes her appearance in the show. She also appears in Beyond Equestria: Pinkie Pie Steps Up as one of the Glammy Award nominees and the target of Svengallop's revenge plot.

Countess Coloratura and Rara are characters in Gameloft's mobile game. The game's description of Countess Coloratura states, "She is the greatest pop star in all of Equestria! Ponies will come from all over to be dazzled by her stage show, even Princess Celestia!" The game's description of Rara states, "This pop star is now at peace with her past and hearing her sing about it is truly a blast!"

COUNTESS COLORATURA is one of Equestria's hottest pop stars. Unfortunately, she let fame go to her head and acted like a diva until her childhood friend Applejack revealed the error of her ways.

A brushable toy of Coloratura was released in 2016 under the toyline's "Explore Equestria" label.[8]

An Enterplay poster featuring Coloratura was distributed at Ponycon NYC 2016.[9]

In the Marks in Time expansion set of Enterplay's collectible card game, card #40 U of Coloratura gives her the description "As Rara grew older she moved up to being a camp counselor. Staff asked her to sing the Equestrian Anthem at the start of each summer." In the Defenders of Equestria expansion set, card #41 SR of Coloratura gives her the description "When Rara gets up on stage and lets the magic in her heart shine through, she can move mountains without even stepping one hoof off the stage."

"Absolutely not. My favorite part of any event is meeting with the schoolponies!"
— The Mane Attraction

"I am not Rara! I am Countess Coloratura! And while we may have been friends when we were young, we have clearly gone in different directions!"
— The Mane Attraction

"You clearly don't understand the real me!"
— The Mane Attraction

"Of course. After all, the show must go on!"
— The Mane Attraction

"This song may be familiar, but yet, it's totally different. Kind of like me, Rara."
— The Mane Attraction 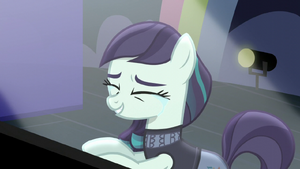