Comet Tail is a male background unicorn pony who appears in several episodes throughout the series. He has a light yellow coat, blue mane and eyes, and a shooting star cutie mark. The show does not name him, referring to him only as "Boy Pony" in the credits of Princess Twilight Sparkle - Part 2, but he is named in merchandise and other media.

He shares his mane style, eye color, and cutie mark design and partly colors with Stormfeather, his design with "Written Script", Rare Find, and Bright Bulb, and his mane style with "Chocolate Haze", "Klein", Emerald Green, and "Silver Script". He also shares his name with a G3 Earth pony mare.

Comet Tail first appears in Sweet and Elite at the Wonderbolts Derby, wearing a hat. Several duplicates of him are also seen among the crowd. He then appears briefly in Hearth's Warming Eve, listening to Spike as he narrates the pageant.

In The Last Roundup, Comet Tail is in the crowd when Applejack gives a speech before leaving for the rodeo competition, standing alongside Twilight Sparkle. He makes several appearances in The Super Speedy Cider Squeezy 6000, standing in line to get apple cider and having a speaking role near the end of the episode. In Hearts and Hooves Day, he appears in Ponyville with Apple Bumpkin during The Perfect Stallion. In A Friend in Deed, he appears in the crowd of ponies smiling during the Smile Song. In It's About Time, he appears in the crowd of ponies watching Cerberus as he first arrives in Ponyville. In A Canterlot Wedding - Part 2, he attends Princess Cadance and Shining Armor's wedding.

In One Bad Apple, Comet Tail is seen watching the Summer Harvest Parade. In Magic Duel, he appears in the crowd watching the initial magic duel between Twilight Sparkle and Trixie. In Sleepless in Ponyville, he is briefly seen arguing with Cherry Berry by an overturned cart.

Comet Tail appears with Cherry Berry again in Princess Twilight Sparkle - Part 2, with another voiced role provided by Tabitha St. Germain. He later appears in Pinkie Pride following Pinkie Pie during Pinkie the Party Planner, watching The Goof Off and later attending Rainbow Dash's birth-iversary party during Make a Wish. In Trade Ya!, Comet Tail appears, sometimes with a horseshoe cutie mark attending the Rainbow Falls Traders Exchange. In Equestria Games, he makes a cameo appearance in the lobby of the Crystal Empire stadium. In Twilight's Kingdom - Part 1, he appears as one of the unicorns having their magic drained by Lord Tirek with Discord's help.

InSlice of Life, Comet Tail appears watching the mane six battle the bugbear, crowding around the Carousel Boutique and watching the DJ station get upturned. In Princess Spike, he appears in Canterlot watching a mime. In Do Princesses Dream of Magic Sheep?, he appears in Ponyville's shared dream. In Canterlot Boutique, he attends the grand opening of Canterlot Carousel. In Brotherhooves Social, he and Cherry Fizzy turn a skipping rope at the Sisterhooves Social for the synchronized jump rope event. Crusaders of the Lost Mark, he appears in the crowd as Rarity, Rainbow Dash and Applejack sing to the Cutie Mark Crusaders. In The Mane Attraction, he appears in the audience for Coloratura's performance at the Helping Hooves Music Festival as one of the unicorns lighting their horns.

In A Hearth's Warming Tail, Comet Tail appears in the titular story in a crowd of ponies in Canterlot during Pinkie's Present. In Spice Up Your Life, he appears in Canterlot's restaurant row as Pinkie and Saffron Masala advertise the Tasty Treat during It's Gonna Work. In The Cart Before the Ponies, he spectates the Ponyville Applewood Derby during Derby Racers. In Buckball Season, he appears as one of the unicorns unsuccessfully trying out for the Ponyville buckball team. In The Fault in Our Cutie Marks, he appears in the audience as Gabby plays baseball during Find the Purpose in Your Life.

In My Little Pony Best Gift Ever, he appears at the Ponyville marketplace during One More Day and later as Rainbow Dash exits a store.

In Common Ground, Comet Tail appears in the Appleloosa theatre watching the opening newsreel on the growth of buckball, and later as a spectator for a buckball game in the Apploosa stadium.

In My Little Pony/Transformers Issue #2, Comet Tail appears on page 11 in the audience of Pinkie Pie's baking show.

Daring Do and the Forbidden City of Clouds refers to a stallion called Comet Tail the Starry-Eyed: "An ancient sorcerer and astronomer, he was the founding member of the Magical Counsel of the Ancients. Comet Tail was responsible for linking the power of the Half-Gilded Horseshoe to the Halo of Cirrostrata."

Starlight Glimmer and the Secret Suite frequently mentions "Comet Tail's Curse", a magical yet believed-to-be-imaginary affliction in which unicorns are permanently stripped of their magic if they try to alter another wizard's magic and leave it incomplete.

In Princess Twilight Sparkle and the Forgotten Books of Autumn, it is revealed that Comet Tail the Starry-Eyed was a real wizard and placed a curse on the city of Bales.

Comet Tail is a playable character in Gameloft's mobile game. His in-game description states, "With a tail that never fails, Comet Tail's a unicorn that's out of this world!"

Comet Tail is named with a trademark symbol in the eighth wave of mystery pack toys and collector cards.[1] The toy uses the Shining Armor mold but features Comet Tail's color scheme and cutie mark, and even the art on the collector card uses a recolored Shining Armor vector. The card states that Comet Tail "runs so fast that he looks like a shooting star!"

Comet Tail is also named with a trademark symbol in Enterplay's collectible card game. The card game is the first time that he is simultaneously referred to by name and depicted with the same design as in the show. His card α #54 C gives him the description "Comet is an expert at using his magic to speed himself up and run really, REALLY fast. He's NOT an expert at using his magic to slow back down."[2] His The Crystal Games expansion set card #7 C lists the quote "If I'm going down, I'm going down running!" His Absolute Discord expansion set card #43 C attributes to Cherry Berry the quote "He ran RIGHT into one of those giant black vines while practicing that speed-up magic of his! I don't think he'll ever learn..." Absolute Discord expansion set card #184 C, Plunderseeds in Ponyville, shows him and Cherry Berry as in Princess Twilight Sparkle - Part 2 and attributes to him the quote "Definitely not my idea of a good time."

On the DVD Season Four Disc 1, the closed captions for the episode Princess Twilight Sparkle - Part 2 refer to Comet Tail by name.

"I wouldn't pay one cent for this dreck!"
— The Super Speedy Cider Squeezy 6000 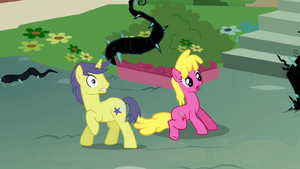