Compass Star is a male Pegasus with an espresso coat, goldenrod mane and tail, green eyes, and a cutie mark of a yellow star surrounded by four white five-pronged smaller stars. He is unnamed in the show, but he is named in merchandise and other media.

Compass Star makes several appearances throughout the series, usually in episodes in which other Pegasus ponies are also featured.

Compass Star first appears in Sonic Rainboom, flying through Cloudsdale alongside Rainbow Swoop as Rainbow Dash introduces her friends to the city of clouds.

Compass Star later appears as a participant in the pageant in Hearth's Warming Eve, seen during the first scene in the Pegasi's cloud city. He also appears several times in Hurricane Fluttershy; he is one of the Pegasi enlisted by Rainbow Dash to help transport water to Cloudsdale.

In Too Many Pinkie Pies, Compass Star is seen among the crowd of ponies complaining to Twilight Sparkle about the Pinkie Pie duplicates.

Compass Star is also seen in Pinkie Pride, watching the Goof Off between Pinkie Pie and Cheese Sandwich. In Equestria Games, he watches the ice cloud descend upon the crowd during the Games' ice archery event, and he is seen during the closing ceremony. In Twilight's Kingdom - Part 1, he is briefly seen when the dignitaries from Maretonia are welcomed to the Crystal Empire.

Compass Star appears in Slice of Life outside the bowling alley as Amethyst Star gives directions to ponies.

In Daring Done?, Compass Star briefly appears during the opening shot of Ponyville. In It Isn't the Mane Thing About You, he makes a cameo appearance in the crowd of ponies at the Quills & Sofas store.

In Friendship University, Compass Star makes various background appearances as a student at Flim and Flam's titular institution in Las Pegasus. After their scam is exposed, he watches as Flim and Flam give refunds to their students and cheers when Twilight Sparkle confirms considering letting the students attend the School of Friendship.

Compass Star is a character in Gameloft's mobile game, added in the game's Everfree Forest update on December 11, 2014 (iOS) and December 19, 2014 (Android). His in-game description states "With his magnetic personality and keen sense of direction, Compass Star is exactly the kind of Pegasus pony you want around should you ever get lost. Just don't ask him to remember what he had for breakfast!"

Compass Star was first named on his Enterplay collectible card game Canterlot Nights expansion set card #55 C, which gives him the description "He can name every capital in the world, but Compass Star couldn't tell you what he had for breakfast." 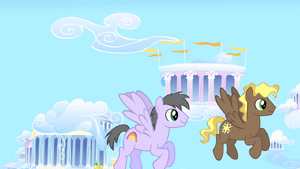