Constance is a background bird and one of Fluttershy's animal companions. She first appears in Friendship is Magic, part 1, and she is named in the season six episode Flutter Brutter.

In Dragonshy, Constance appears living in one of the trees nearby Fluttershy's cottage. She also makes a couple of background appearances in Winter Wrap Up and in Fluttershy's flashback in The Cutie Mark Chronicles.

In Lesson Zero, Constance's bird nest is disturbed when Twilight Sparkle appears looking for a friendship problem. She also appears during Find A Pet Song in May the Best Pet Win!, at the Canterlot Garden Party in Sweet and Elite, during Fluttershy's training montage in Hurricane Fluttershy, and interacting with Scootaloo in Ponyville Confidential. In A Canterlot Wedding - Part 2, Constance appears as a choir songbird once again during Princess Cadance and Shining Armor's wedding.

In Filli Vanilli, Constance appears briefly during Music in the Treetops and at the Ponyville Pet Center fundraiser wearing a bow tie. She also appears at the end of Trade Ya! flying onto Fluttershy's hoof when she blows her new bird call.

In Scare Master, Constance is one of several birds that pose as ghosts to scare Fluttershy's friends on Nightmare Night.

In Flutter Brutter, Constance is referred to by name for the first time. After Fluttershy kicks her brother Zephyr Breeze out of her cottage, Constance informs her about Zephyr's difficulty in the Everfree Forest.

In Fluttershy Leans In, Constance appears as one of a large group of animals taking residence in Dr. Fauna's clinic, and she appears in Fluttershy's cottage as Fluttershy tells her friends about her sanctuary project.

Constance appears in Fake It 'Til You Make It, attending Fluttershy's picnic with her other animal companions. In Surf and/or Turf, she briefly appears perched on a tree branch with another bird in Hamonizing Heights. In Marks for Effort, she flies into the School of Friendship's fountain square and lands on Scootaloo's head, and later appears giving the Cutie Mark Crusaders graduation caps. In Yakity-Sax, two birds resembling Constance are among many who fly out of the forest due to Pinkie Pie's inept yovidaphone skills. When Pinkie Pie later plays her yovidaphone outside Fluttershy's home, Constance flies out of a nearby birdhouse.

In the one-hour special My Little Pony Best Gift Ever, Constance makes a cameo appearance as one of the birds accompanying an unnamed pony in front of Ponyville Town Hall during One More Day.

In the Friendship Games blooper reel, a bird resembling Constance appears as one of the pets that human Fluttershy smuggles to school in her backpack.

In the fourth Equestria Girls film, Constance appears drawn to Fluttershy when she shows new magic at Camp Everfree. Here, Fluttershy refers to her as "Mr. Bird", despite being addressed as female in Flutter Brutter.

Constance appears in the Adventures in Ponyville standalone game "Rarity Game"​[​specify​]​ and on the title screen and medium/hard difficulties of Fluttershy's Songbird Chorus.

Constance is a background character in Gameloft's mobile game. She appears in the Pet Shop and the What's Hot Collection #22 background.[1][2]

CONSTANCE loves to sing! She's a bird. It's her thing. Sometimes her songs are so beautiful they make Fluttershy tear up. Too emotional, right?

In the activity book My Little Pony First Look and Find, Constance appears on one of the activity pages as she appears in A Canterlot Wedding - Part 2. 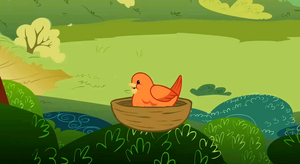