Coriander Cumin and Saffron Masala are a father and daughter team of unicorn ponies who appear in the season six episode Spice Up Your Life. They own a restaurant in Canterlot called The Tasty Treat, which serves Indian-inspired cuisine.

Coriander Cumin and Saffron Masala appear in Spice Up Your Life as the respective host and chef of a small restaurant called The Tasty Treat, which serves cuisine exotic to Canterlot.

When Pinkie Pie and Rarity first enter their establishment, Saffron Masala is happily eager to serve them food. Conversely, her father Coriander Cumin maintains a bitter disposition in their presence because of the restaurant's poor business. As a result, Coriander and Saffron have a strained relationship and frequently argue.

Having been brought to Canterlot by the Cutie Map to solve a friendship problem, Pinkie and Rarity offer to help Coriander and Saffron save their failing business. However, their ideas on how to save the restaurant conflict when Rarity helps Coriander transform the restaurant to be identical to every other restaurant in the area and Pinkie encourages Saffron to maintain the restaurant's uniqueness.

When famous food critic Zesty Gourmand visits The Tasty Treat, the two sides continue to be at odds, resulting in a bowl of curry spilling on Zesty. As Coriander and Saffron wallow in failure, Saffron serves her father an old dish from her childhood and reminds him why they opened The Tasty Treat in the first place. With renewed resolve, Pinkie and Rarity turn things around and help make the restaurant's third grand opening a success.

Through Pinkie and Rarity's assistance, Coriander and Saffron mend their fractured relationship and come together in the pastime that truly unites them: cooking.

In the Friendship is Magic: Free Comic Book Day comic, Saffron Masala appears on pages 2-3 helping with the catering for Twilight Sparkle's first day as ruler of Equestria.

Coriander Cumin and Saffron Masala are characters in Gameloft's mobile game, with a story role during the "Royal Dining: First Course" and "Royal Dining: Entrée" events, serving respectively as announcer and judge for the Equestria Super Chef Competition. The game's description of Coriander Cumin states, "Have you met Saffron? This pony’s her dad -- and he’ll make you the best curry you’ve ever had!" The game's description of Saffron Masala states, "Just like her name, this mare knows how to spice -- she’d be happy to give you some cooking advice!"

CORIANDER CUMIN and SAFFRON MASALA are the father and daughter of the Tasty Treat, a restaurant that serves exotic cuisine in Canterlot. Their passion for cooking brings them through every obstacle—including picky food critics.

Saffron Masala: I'm Saffron Masala, the chef here at The Tasty Treat, the most exotic cuisine in Canterlot. Would you like to hear about the specials?

Saffron Masala: Father, stop it! Don't close up the restaurant around our guests.
Coriander Cumin: What does it matter?! When they leave, nopony else will be coming in.
Saffron Masala: Well, your attitude isn't going to bring anyone in! Can't you at least pretend to be positive?!

Coriander Cumin: [unenthusiastic] Welcome to The Tasty Treat. You can eat here if you want. Or not. Who cares?

Saffron Masala: That's all I've ever wanted to do, father! Make food for the ponies of Canterlot like the food we made together when I was younger!
Coriander Cumin: It has been so long since we cooked together. Heh. Remember how you used to hide the ingredients you did not like?

Saffron Masala: We've both been so stressed about the restaurant succeeding that we forgot what it was we loved about it in the first place.
Coriander Cumin: Cooking is something we used to love to do together. No matter what happens next, thank you for reminding us of that. 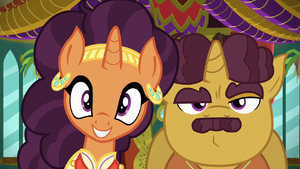