Cotton Cloudy is a Pegasus filly with a white coat, light blue mane and tail, and lavender eyes. She has a cutie mark of either a blue cumulus cloud or a yellow archer's bow with nocked arrow, and sometimes she has no cutie mark at all. The show does not name her, but Gameloft's mobile game has listed her name in-game and included her in its files.

Cotton Cloudy makes her debut appearance during Call of the Cutie in Sugarcube Corner with a cumulus cloud cutie mark. She spectates the race in Rainbow Dash's flashback in The Cutie Mark Chronicles standing next to "Princess Erroria". In Lesson Zero, she appears as a unicorn in Twilight Sparkle's horrifying vision of going back to Magic Kindergarten. Cotton Cloudy appears with other foals watching Apple Bloom in The Cutie Pox and Featherweight in Ponyville Confidential, having an archer's bow cutie mark in both scenes. She also appears with other foals and the Cutie Mark Crusaders playing jump-rope during Pinkie Pie's Smile Song in A Friend in Deed.

In season three, Cotton Cloudy appears briefly in Spike at Your Service and Games Ponies Play.

In season four, she appears among the spectators during The Super Duper Party Pony and The Goof Off in Pinkie Pride, in the background of several scenes in Simple Ways, watching the Pony Tones in Filli Vanilli, in numerous scenes with other foals in Twilight Time, and asking for Twilight's autograph in Trade Ya! She is also briefly seen in the background in It Ain't Easy Being Breezies, Leap of Faith, Equestria Games, and Twilight's Kingdom - Part 2.

In season five, Cotton Cloudy appears as a resident of Our Town in The Cutie Map - Part 1, at Cranky Doodle Donkey and Matilda's wedding in Slice of Life, at the Sisterhooves Social in Brotherhooves Social and flying with Fluttershy for a photograph at the end of Crusaders of the Lost Mark.

Cotton Cloudy appears in chapter 6 of Ponyville Mysteries: The Tail of the Timberwolf.

While Cotton Cloudy doesn't appear as a character in Gameloft's mobile game, her fan-given name was listed in-game in a partial list of characters that could be won from the Balloon Pop minigame, shown shortly after the Canterlot update, and the game's files include two character model files with the string "cottoncloudy" in their names as well as a quest menu icon depicting her. The character did not appear in-game because of "a problem with character naming".[2]

"That was the scariest birthday party ever."
— Ponyville Mysteries: The Tail of the Timberwolf 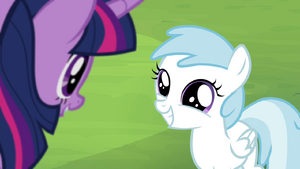