Count Caesar is a male Earth pony and one of the four most frequently appearing high society ponies, along with Sealed Scroll, Lyrica Lilac, and Royal Ribbon. He has a light gray coat, a bluish silver mane, gold eyes, and a golden laurel wreath cutie mark. He shares his design with "Classy Clover" and "Lincoln", and has vocal roles in The Cutie Mark Chronicles and The Best Night Ever. He is unnamed in the show, but he is named in merchandise.

Count Caesar appears mostly as a background pony, usually alongside other frequently appearing high society ponies. He first appears in The Ticket Master, during Rarity's fantasy of marrying Prince Blueblood. He later appears in Green Isn't Your Color, at both of Fluttershy's photo shoots. He also appears in Applejack's flashback in The Cutie Mark Chronicles, walking along a street in Manehattan and delivering his first spoken line in the show to a filly Applejack, and later attending the Oranges' dinner party.

In The Best Night Ever, Count Caesar appears numerous times in and around the castle. During At the Gala, he is part of Rarity's, Rainbow Dash's, and Pinkie Pie's choirs. In an attempt to impress Spitfire and Soarin, Rainbow Dash knocks Count Caesar into the air and then catches him on her back. This fails to grab the Wonderbolts' attention, however, and she throws Count Caesar off, leaving him confused.

In Sweet and Elite, he appears at the beginning of the episode walking through Canterlot, makes several appearances during Becoming Popular (The Pony Everypony Should Know), and attends the Canterlot Garden Party toward the end of the episode. He appears at the beginning of Hearth's Warming Eve, in Cranky Doodle Donkey's flashback in A Friend in Deed, at both weddings and the reception in A Canterlot Wedding - Part 2, in The Crystal Empire - Part 1 during the beginning of The Failure Song, at the Crystal Empire train station in Games Ponies Play, and in Magical Mystery Cure during Morning in Ponyville and at Twilight Sparkle's princess coronation.

In Make New Friends but Keep Discord, Count Caesar appears as a guest of the Grand Galloping Gala. He also appears in Amending Fences and Rarity Investigates!

He appears in IDW's Friendship is Magic comic book issue #5 page 8, in a nightmare that Pinkie Pie has.

A mini-figure toy of him can be found in Wave 19.

He is included in trading card puzzle B, appearing on the backs of the foil cards Royal Wedding Applejack and Royal Wedding Twilight Sparkle in parts of a shot from A Canterlot Wedding - Part 2.

"Hey! Outta the way, you rube!"
— To filly Applejack in The Cutie Mark Chronicles

Rainbow Dash: Come on, Rainbow! If they don't notice you, you gotta make 'em notice you. [whistles]
Count Caesar: [yells] [grunts]
— The Best Night Ever 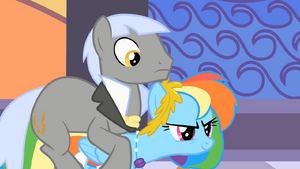