Lily Lace has a similar eye shape to Fluttershy and Mage Meadowbrook.

In the season seven episode Honest Apple, Lily Lace, Starstreak, and Inky Rose take part in Rarity's Couture du Future fashion contest at Carousel Boutique judged by Photo Finish, Hoity Toity, and Applejack. Lily Lace is a unicorn with a Valley girl accent who exhibits mannerisms stereotypical of "millennials", punctuated by overuse of the phrases "literally" and "I can't even". Her contest designs are flowing and inspired by birds and bird songs. Starstreak is an Earth pony with an avant-garde style that leans toward cutting-edge. Inky Rose is a goth Pegasus whose designs incorporate mostly black and dark colors.

Throughout the contest's preparation period, Lily Lace, Starstreak, and Inky Rose's designs are met with approval from Rarity, Hoity Toity, and Photo Finish, but Applejack largely criticizes the designs for their lack of functionality. Applejack's constant criticisms, from the number of buttons on Inky Rose's suit to the feathers on Lily Lace's hat, wear heavily on the designers' patience. When Applejack goes so far as to ridicule fashion as a whole, the insulted designers drop out of the contest.

After Applejack apologizes for being unintentionally hurtful with her honesty, Lily Lace, Starstreak, and Inky Rose reenter the contest, and Applejack helps them with finishing their designs. During the contest's winner vote, Rarity votes for Lily Lace, Hoity Toity votes for Inky Rose, and Photo Finish votes for Starstreak. Applejack, unable to decide on a winner, votes for all three, resulting in a three-way tie.

In the season eight episode Fake It 'Til You Make It, Inky Rose appears as a customer at Rarity For You.

The Couture du Future contestants appear in a flashback of Honest Apple with Applejack apologizing to them in Harvesting Memories.

Lily Lace: You guys, this morning, on my way here, I heard a bird singing literally the most beautiful song I'd ever heard! And I wanted to capture not so much the bird's song exactly but more like how the wind carried the bird's song!

Starstreak: I'm not interested in what's already been done. Only what will exist... in the future!

Inky Rose: It's to create a distressed look.

Starstreak: I didn't get into fashion to design boring utilitarian clothes!
Lily Lace: I want to create elegance and drama! And this is literally the opposite of—! [scoffs] I mean—! [scoffs] I can't even! [guttural scoff]
Inky Rose: Yeah... no.

Lily Lace: It means sooooo much to me! I literally can't even! [guttural scoff] 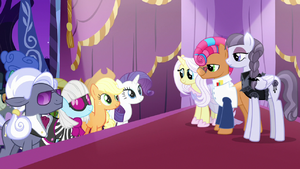 Retrieved from "https://mlp.fandom.com/wiki/Couture_du_Future_contestants?oldid=2165059"
Community content is available under CC-BY-SA unless otherwise noted.