Cozy Glow is a female school-age Pegasus pony who first appears as a supporting character in the season eight episode Marks for Effort, later becoming the main antagonist of the finale School Raze and one of the main antagonists of the season nine finale The Ending of the End. She has a pink coat, curly light blue mane and tail, scarlet eyes, and a cutie mark of a rook.[1]

Cozy is a former student of Twilight Sparkle's School of Friendship, imprisoned in Tartarus for attempting to destroy all magic. She is released from her imprisonment by Grogar to join his alliance, along with Queen Chrysalis and Lord Tirek, to defeat Twilight and her friends and conquer Equestria. She is defeated by the Mane Six and their allies, and turned to stone along with Chrysalis and Tirek.

The Crusaders teach Cozy Glow how to be friendly while doing nice deeds for Sweetie Drops, Mrs. Cake, and Big McIntosh. After Cozy gets an "A" on her assignment, the Crusaders assist her further by helping her study for an upcoming friendship exam, during which she learns about the values of friendship represented by the Elements of Harmony. However, Cozy fails the exam, and her very poor test answers cause Twilight Sparkle to accuse the Crusaders of intentional bad tutoring, believing they did so out of spite for not being allowed to attend the school themselves.

Upon discovering this, Cozy Glow turns to the school's guidance counselor Starlight Glimmer and confesses that she failed the exam on purpose so that the Crusaders would be allowed to enroll at the School of Friendship. When the truth is revealed, Cozy apologizes to the Crusaders for her misguided intentions, and the Crusaders receive honorary School of Friendship diplomas and are appointed as friendship tutors. Cozy is last seen leaving the school with her new friends as they set out to tutor more students.

Cozy Glow makes a few background appearances in A Matter of Principals and one in The Hearth's Warming Club just as Twilight dismisses the students for the holiday break. She appears again in Friendship University, giving Twilight the flyers that inform her about Friendship U, and later appearing after Rarity questions how Flim and Flam could have gotten a hold of the School of Friendship's lesson plans. Cozy also appears waiting in line for Starlight's counseling in Road to Friendship and in A Rockhoof and a Hard Place watching Twilight introduce Rockhoof as a new teacher in the school.

In What Lies Beneath, Cozy is helping Twilight by organizing the school library, when she notices the Young Six having a difficult time studying for a friendship test. She manipulates them into doubting their confidence in their friendships. She offers them her study notes for help. At the end of the episode, the Young Six meet Cozy upon their journey underneath the school, where she learns about the Tree of Harmony's test on their friendship skills. As the Young Six drift off to sleep in exhaustion, Cozy ominously looks at the vent where the Tree of Harmony is hidden.

In School Raze - Part 1, Cozy's villainous nature is revealed as she manipulates the Mane Six into going to Tartarus, captures Starlight Glimmer, and, with the help of co-conspirator Lord Tirek, steals the school's artifacts to harness their magic and take over Equestria. In Part 2, after Chancellor Neighsay assumes control of the school, Cozy orchestrates a student uprising to take back her position as school headmare. She also locks the Cutie Mark Crusaders in a hall closet when they try to distract her, and she tricks the students into believing the Young Six are trying to destroy the school.

Cozy's plans are eventually foiled by the intervention of the Tree of Harmony, causing the magic she stole to return to its rightful owners. Caught between the Young Six, the Mane Six, the school students, the princesses, and the royal guards, Cozy Glow is defeated and sentenced to imprisonment within Tartarus, where she tries to make friends with Tirek.

In The Beginning of the End - Part 1, Cozy Glow aggravates Tirek with her continued attempts at friendship until the two are suddenly transported out of their cages by Grogar, who assembles them together with Queen Chrysalis and King Sombra in order to join forces against the Mane Six. Cozy is unfamiliar with Grogar since his name has all but faded into legend, but she is interested in the idea of befriending other villains. In Part 2, Cozy tries to help Tirek and Chrysalis get along, with little success. Upon learning of Sombra's defeat by the Mane Six, Cozy and the others nervously agree to Grogar's terms to avoid meeting the same fate.

Cozy Glow is mentioned indirectly by Yona in Uprooted, and directly by Sandbar in She's All Yak.

In The Summer Sun Setback, Cozy Glow, along with Lord Tirek and Queen Chrysalis, decides to infiltrate Canterlot library's forbidden wing to get information in how to activate Grogar's bell and use its magic. She takes part in sabotaging the Summer Sun Celebration by disrupting the event's weather patterns, thus causing a storm, and during the confusion, she and her fellow villains steal a book from the Canterlot Archives, which they plan to use to learn how to unlock the bell's power.

In The Ending of the End - Part 1, Cozy Glow, Chrysalis, and Tirek successfully unlock the power of the Bewitching Bell to make themselves all-powerful, with Cozy herself turning into an Alicorn. They also drain Grogar of his magic, revealing him to be Discord in disguise. Cozy tricks her comrades into letting her absorb Discord's magic in an attempt to betray them. This fails due to her inability to control his chaos, leaving her no choice but to let it be returned to the Bell. In their siege upon Equestria, Cozy attacks the Mane Six and the Princesses at Canterlot Castle (using the Bell to take Celestia and Luna's magic), and she, Chrysalis, and Tirek overwhelm them as Twilight makes her escape.

In Part 2, Cozy and her fellow villains imprison Twilight's friends and celebrate their victory, but fail to reach an agreement regarding what to do with the magic they stole. After the rest of the Mane Six escape and the windigos appear as a result of their creating distrust among ponies, Cozy and the other villains face off against the Mane Six, and later an army of their allies, in a grand final battle. At the end of the battle, Cozy is turned back into a Pegasus, and she and her cohorts are frozen in stone for their crimes.

In The Last Problem, a stained glass window depicting Cozy Glow, Chrysalis, and Tirek's defeat appears in Canterlot Castle in future Equestria. They are also pictured in a newspaper in Twilight's flashback.

Cozy's appearance in The Ending of the End - Part 1 when she, Tirek, and Chrysalis capture Twilight only to be saved by Rarity reappears in A-Dressing Memories.

Cozy Glow is a character in Gameloft's mobile game, and serves as an enemy boss during the "School Raze" event. Her bio states, "Gosh, miss or mister, this pony sure would like to be your bestest friend--and without any ulterior motives at all, too!"

When first introduced, Cozy portrays herself as sweet, cute, innocent, and naive. As a student of the School of Friendship, she often displays a fear of failing class and being expelled. However, this is later revealed to be a front for Cozy's true nature as a schemer and manipulator. She worms her way into the lives of the Mane Six, Young Six, and Cutie Mark Crusaders, playing the role of an adorable, friendly filly and earning their trust, as part of her plan to take over the school and eventually all of Equestria.

Her true self is power-hungry and unscrupulous, willing to request help from Tirek (one of Equestria's greatest enemies), and use and discard anyone to get what she wants. She thinks little of the true virtues of friendship, believing she can easily make more friends without them, and cares for no one but herself, seeing friendship solely as a means to gain power.

Like Chancellor Neighsay, she holds prejudice against non-ponies, passive-aggressively taunting most of the Young Six about how friendship seemingly isn't in their nature during What Lies Beneath. In School Raze - Part 1, she mockingly labels Smolder as a "scheming dragon".

While locked up next to Tirek, Cozy annoys him with her attempts at familiarity, such as addressing him simply as Tirek and creating a "friendship sculpture" of the two of them. After they are freed by Grogar, she stays close to Tirek, regularly cowering behind him whenever she gets scared. She also claims to know "everything" about friendship and attempts to get both Tirek and Chrysalis to say something nice about each others' species.

In Frenemies, Cozy Glow displays her arrogance by bragging about draining Equestria's magic and cites it as the reason why she should lead Chrysalis and Tirek. She is also shown to be very short-tempered and spoiled, yelling at Rusty Bucket when he refuses to let her attempt to reach the top of Mt. Everhoof. She claims that the "real" her is "cute and loveable", despite Tirek pointing out that her true personality is anything but. Near the end of the episode, she finally agrees to work together with Tirek and Chrysalis, and briefly realizes that when the three of them helped each other, it felt better somehow, showing a degree of cooperation.

In The Ending of the End, Cozy Glow shows a distinct vicious side, revelling in her newfound Alicorn powers, and suggesting more than once that the Mane Six and their allies be immediately destroyed. She also shows a desire for more power than her comrades, wanting to take Discord's chaos magic from the Bewitching Bell, even after her first attempt resulted in her being unable to control it.

Cozy Glow is featured on a magazine​[​specify​]​ card.

"I'm Cozy Glow. It's very nice to meet you, but I don't know if I'll stay long. I'll probably flunk out. I'm having so much trouble with my friendship lessons."
— To Cutie Mark Crusaders, Marks for Effort

"I never could have done it without your help!"
— To Cutie Mark Crusaders, Marks for Effort

"I guess I still have a lot to learn about friendship."
— Marks for Effort

"You get some rest. Don't give any of this another thought. Just let Cozy take care of everything."
— What Lies Beneath

"You know, you ponies got it all wrong. Friendship isn't magic. Friendship is power! With Twilight and her lackeys out of my way, all of Equestria will bow to me! The future Empress of Friendship!"
— School Raze - Part 1

"You see, if there's one thing I've learned here, it's that friendship is the most powerful thing there is. And as headmare of the School of Friendship, nopony will have more friends than me! Making me the most powerful pony in Equestria!"
— School Raze - Part 2

"Psst, Tirek! I just wanna make sure you can see my best friends rock sculpture from over there!"
— The Beginning of the End - Part 1

"This is not the real me! I'm cute and lovable!"
— Frenemies

"You know, it really was super easy to get all those Earth ponies and Pegasi and unicorns to turn on each other."
— The Summer Sun Setback

"That's the problem with you magic-types. You're so reliant on all your special power, you forget to use your brains!"
— The Ending of the End - Part 1

"And now for your complete destruction! Won't that be fun?"
— The Ending of the End - Part 2

"Now, now, professor. We all know you're not the fast one."
— To Fluttershy, The Ending of the End - Part 2

"It’s always fun in Pinkie Pie’s class at the School of Friendship! Can you find all the little pictures in the big picture?"
— Signature My Little Pony magazine issue 95's What can you spot?​[​citation needed​]​[6] 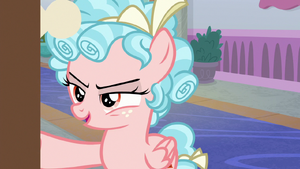