Cranky Doodle Donkey is a male donkey and Matilda's husband who first appears in the episode A Friend in Deed. His name is a pun on "Yankee Doodle Dandy", a famous song written by George M. Cohan in 1942.

Cranky Doodle Donkey appears in the episode A Friend in Deed, right after Pinkie Pie sings the Smile Song. Unlike the other ponies, he does not smile as a result of Pinkie Pie's song.

Pinkie Pie annoys Cranky by trying to guess his name. He eventually reveals his full name, Cranky Doodle Donkey, which sets Pinkie Pie into a song of the same name and has her calling him "Doodle." Angry, Cranky yells at Pinkie, "Nopony calls me Doodle!" Pinkie offers Cranky her friendship, which he refuses, telling Pinkie that he has made enough friends in his life and that he came to Ponyville to settle down and live in peace.

Pinkie tries again, this time using her "Welcome Wagon" to sing a song. However, this backfires when the wagon's burst of confetti blows off Cranky's wig, which Pinkie then steps on believing it to be a spider. Pinkie tries to help by loudly announcing to the crowd that Cranky needs a new wig and points out his baldness. Infuriated and embarrassed, Cranky tries to leave, but Pinkie forces him to go to the local spa in an effort to make it up to him. Afterward, Pinkie presents Cranky with a new, blonde wig. Cranky thanks Pinkie, but he still does not smile.

Later, when Pinkie intrudes on Cranky unpacking at his new, secluded residence, he reveals that he has traveled far and wide across Equestria to various places such as Fillydelphia and Manehattan to search for a special friend of his. While looking through Cranky's belongings, Pinkie accidentally destroys a scrapbook that contains the only physical reminders he has of his special friend. Cranky throws Pinkie out of his house, declaring that he will "never, ever, ever, ever, ever" be her friend.

Determined to apologize, Pinkie returns to Cranky's later. Upon seeing her, Cranky vainly runs and tries to hide from Pinkie. Cranky angrily dismisses Pinkie's apology, telling her that she destroyed the only thing he had to remember his special friend by.

Pinkie returns once more with Matilda, whose voice Cranky immediately recognizes. Shocked, he asks how Pinkie could know she is his special friend. Pinkie reveals that she remembered that Matilda has some of the same items in her scrapbook that he had in his. After briefly reminiscing about the night they met at the Grand Galloping Gala and how Matilda left a note for Cranky telling him she was moving to Ponyville (which Cranky never found), Matilda kisses Cranky, causing him to finally smile. Grateful for what she did, Cranky finally accepts Pinkie's offer of friendship but asks that he and Matilda be left alone together for the moment.

He appears briefly in Dragon Quest, ferrying Spike across a river on a raft.

In Magical Mystery Cure, one of Pinkie's flashbacks shows her felt imagination of Cranky.

Cranky appears in the background alongside Matilda during the Turkey Call contest in Filli Vanilli, and he is also part of Twilight Sparkle's welcome celebration in Trade Ya!

In Slice of Life, Cranky gets married to Matilda. He complains to Derpy about the wedding invitations, and when he loses his toupee before the ceremony, Steven Magnet gives him a replacement made from his mustache.

Cranky appears in No Second Prances as one of Twilight Sparkle's dinner guests posing as one of Starlight Glimmer's friends. He casually asks about the fluidity of Princess Celestia's mane. In A Hearth's Warming Tail, he briefly appears during Hearth's Warming Eve Is Here Once Again. In Flutter Brutter, Pinkie Pie has a picture of Cranky in her wallet.

In 28 Pranks Later, Rainbow Dash pranks Cranky by replacing his toupee with a skunk. He also buys Filly Guide cookies from the Cutie Mark Crusaders and pretends to be a zombie as part of a revenge prank against Rainbow Dash.

In Grannies Gone Wild, Cranky appears in the background at the Las Pegasus buffet being yelled at by S06E12 Unnamed Unicorn Stallion #7. In The Break Up Break Down, Cranky makes a cameo appearance on a Hearts and Hooves Day date with Matilda. In A Matter of Principals, Discord temporarily hires Cranky to be a substitute teacher at the School of Friendship. In Yakity-Sax, he makes another cameo at Pinkie Pie's Appreciation Day party. In A Rockhoof and a Hard Place, he is briefly shown looking mortified after Rockhoof (in his temporary position as a mailpony) loudly talks about how the donkey has a rash in a "very embarrassing place".

In the special My Little Pony Best Gift Ever, Cranky briefly appears among the crowds during the song One More Day, alongside Matilda.

In A Trivial Pursuit, Cranky appears as a contestant in the Trivia Trot paired up with Sunburst. He unfortunately falls asleep during the competition, which gets him and Sunburst disqualified after Twilight tattles on him.

In The Last Problem, Cranky is briefly featured in the Ponyville newspaper, and he attends Twilight Sparkle's coronation ceremony. He also briefly appears in Pinkie Pie's group shot during The Magic of Friendship Grows.

A small part of Cranky running away from Pinkie before popping out in a beaver costume in A Friend in Deed reappears in Cakes for the Memories. Rainbow Dash's skunk prank on Cranky from 28 Pranks Later reappears in Deep Tissue Memories.

Beginning with The Maud Couple, Cranky was added to the opening intro in the establishing shot of the School of Friendship.

In Sundae, Sundae, Sundae, Cranky Doodle Donkey appears in the crowd of ponies awaiting the opening of the Sugarcube Corner Ice Cream Museum, responding to Pinkie asking him his favorite flavor with "vanilla". After all of the ice cream on display melts into soup, Cranky says he hates eating cold things.

Cranky Doodle Donkey is mentioned in chapter 11 of Twilight Sparkle and the Crystal Heart Spell, "Rallying the Hoofs", in chapter 3 of Pinkie Pie and the Rockin' Ponypalooza Party!, "The Road Less Sparkled", and in chapter 6 of Rainbow Dash and the Daring Do Double Dare, "Heating Up". He appears in multiple chapters of Applejack and the Honest-to-Goodness Switcheroo.

Cranky Doodle is a character in Gameloft's mobile game. His in-game description states, "You're trying to get this ol' donkey to smile? Unless you're Matilda, you'll wait for a while."

CRANKY DOODLE DONKEY may be a crotchety old grouch who's reluctant to loosen up, but all that changed when the sweet-natured MATILDA came around. Matilda met the cranky mule at the Grand Galloping Gala, where he began courting her as his "special friend." Matilda is the only one who's allowed to call him by the nickname "Doodle."

CRANKY DOODLE DONKEY has had it! Catch him on a bad day and get an earful of gripes. Don't mention his toupee, either—he's a little sensitive about his hair. It's a good thing his wife, MATILDA, is around to even out his temper. She's a Donkey damsel with a heart of gold, who always tries her best to lift her sweetheart's spirits.

True to his name, Cranky is initially easily annoyed and upset. When first introduced, he speaks sarcastically and uses quips. Only once reunited with his "special friend" does Cranky smile and show kindness and joy.

"Kid, you're smarter than you look."
— To Pinkie Pie in A Friend in Deed

"Ever since that day, I've gone from town to town to town, searching all over Equestria for you... until finally I gave up. I came to Ponyville to retire from my search."
— To Matilda in A Friend in Deed

"You told me you could do it for half what the others charged, and then you sent the invitations to everypony in town with the wrong date!"
— To Derpy in Slice of Life

"How do you get your hair to do that all the time?"
— To Princess Celestia, No Second Prances

"Where am I? What time is it? Where are my morning haycakes?!"
— A Trivial Pursuit 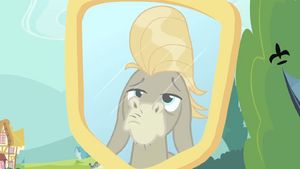