Cranky Doodle Donkey's human counterpart appears in the My Little Pony Equestria Girls franchise. He is a teacher at Canterlot High School.

Cranky first appears as a teacher in the My Little Pony Equestria Girls: Rainbow Rocks animated short Music to My Ears.

In Friendship Games, Cranky has a brief cameo teaching a class hearing Vice Principal Luna over the loudspeaker. He also appears in a photo during the credits.

In the half-hour special Mirror Magic, Cranky briefly appears at the Canterlot Mall.

In A Little Birdie Told Me, Cranky appears with a speaking role teaching a math class to Fluttershy, Trixie, and others. He also appears in Driving Miss Shimmer as Sunset Shimmer's driving test instructor and in Happily Ever After Party, in which the Cutie Mark Crusaders try to borrow his movie projector for the school play after-party.

In the second season short Best in Show: The Pre-Show, he enters the Canterlot High pet show with his pet beagle Fluffersnuff. In Best in Show: The Victory Lap, Fluffersnuff is shown to have won the contest "despite being in a horribly cranky mood during the personality round" per Fluttershy. In the Principal Celestia ending of The Road Less Scheduled, Cranky is part of Celestia's group in attendance at the Starswirled Music Festival.

In Do It For the Ponygram!, Cranky Doodle appears dancing like MC Hammer in a CHS classroom while Sunset Shimmer and Twilight Sparkle spy on and make fun of him.

Mr. Cranky Doodle is listed in the credits of the hour-long special Rollercoaster of Friendship, despite not actually appearing. According to co-director Katrina Hadley, this is because "he was in a scene in the animatic that was cut for time."[1]

In the "Blizzard or Bust" segment, Cranky sees through the Equestria Girls' attempt to fake a snow day, informing Celestia and Luna of the deception and suggesting they get detention. He later proctors their science test. In "Dashing Through the Mall", he makes a background appearance standing at a line to a pet store at the mall.

In chapter 15 of the My Little Pony: Equestria Girls: Rainbow Rocks screenplay novelization of animated shorts, human "Cranky Doodle was storming down the hallway in his usual grumpy mood when, all of a sudden, he jumped up in the air, did a split, landed, twirled, and opened the door to his classroom, singing and smiling." Later in the same chapter of the same book, "the kids in class just seemed noisy. Someone threw a paper airplane across the room. Another kid flung a spitball. Cranky Doodle yelled at them."

"Fluttershy, cheatin' is a serious offense."
— A Little Birdie Told Me

"Not bad, Sunset. You completed the left turn, the right turn, the U-turn, and the K-turn. But now comes the party where everyone fails – parallel parking."
— Driving Miss Shimmer, Rarity ending

"Oh, this is unfortunate. Of course I know how to change a tire, but, uh, I wouldn't want you waiting around. So I guess, uh... you fail? Is that fair? Hmm?"
— Driving Miss Shimmer, Applejack ending

"If your driving's as good as your rhymings, I'm sure you'll do just fine...-ings."
— Driving Miss Shimmer, Fluttershy ending 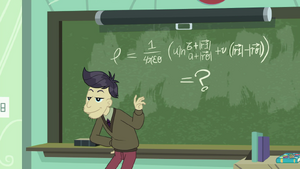 Retrieved from "https://mlp.fandom.com/wiki/Cranky_Doodle_Donkey_(EG)?oldid=2150084"
Community content is available under CC-BY-SA unless otherwise noted.