Crusaders of the Lost Mark

The episode's opening scene originally included rhyming dialogue recapping the Crusaders' cutie mark attempts, but it was cut for time.[1][2]

Even though regular composer William Anderson is credited for scoring this episode, songwriter Daniel Ingram stated on Twitter that he actually wrote the underscore for this episode with orchestrations by Caleb Chan and Trevor Hoffman.[3] This was corrected in the Netflix version.

Ingram received a 2016 Leo Award for Best Musical Score in an Animation Program or Series for this episode.[4][5]

According to Jim Miller, Rarity and Sweetie Belle's parents are "on vacation and out of town" when Sweetie Belle gets her cutie mark.[6]

The episode opens at the Cutie Mark Crusaders' clubhouse, with the Crusaders discussing their next attempt to earn their cutie marks. Though Sweetie Belle and Scootaloo are out of ideas, Apple Bloom assures them they'll make their mark and find their place in the world by not giving up.

Suddenly, Pipsqueak enters and tells the Crusaders that he's running for student president at the Ponyville Schoolhouse. He asks the three to be his campaign managers, and the Crusaders eagerly accept in hopes of earning their cutie marks in campaign managing.

Pipsqueak and the Crusaders begin Pip's president campaign on the schoolhouse playground, and one of his first promises if elected is replacing playground equipment that was damaged during Twilight Sparkle's battle with Lord Tirek. Diamond Tiara appears to run against Pipsqueak for president, having the advantage of her mother Spoiled Rich being on the school board.

Pipsqueak and Diamond Tiara's opposing campaigns take the form of a spirited sing-off, with Pipsqueak promising positive change and Diamond Tiara attempting to elicit votes through blackmail and bribery. At one point in the song, Diamond Tiara rudely ignores Silver Spoon's advice.

When the votes are counted, Pipsqueak wins by a landslide. For Diamond Tiara's earlier rudeness, not even Silver Spoon voted for her. In response to this, Diamond Tiara gallops off in a rage. Somewhat worried about her, the Crusaders follow to make sure she's okay.

The Crusaders follow Diamond Tiara into Ponyville, where she meets with her mother Spoiled Rich. Upon learning that her daughter lost to "that transplant from Trottingham," Spoiled Rich harshly scolds Diamond Tiara and reminds her that social status means everything to their family.

As Spoiled Rich leaves, Diamond Tiara wanders through town and sings of her inner struggles, expressing her desire to be a better pony. The Cutie Mark Crusaders feel sorry for Diamond Tiara and decide to reach out to her.

The next day, after school, the Crusaders invite Diamond Tiara to their clubhouse to hang out, and Diamond Tiara begrudgingly accepts. Once at the clubhouse, Tiara admits how lucky the Crusaders are for having so many options open to them before being stuck with a cutie mark they don't understand. Having overheard Tiara's conversation with her mother and singing the day before, the Crusaders offer to help her change, but Pipsqueak suddenly arrives, crying out for help.

Pipsqueak tells the Crusaders that his request for new playground equipment was denied by the school board because there isn't enough money in the budget. Diamond Tiara sees this as an opportunity to reclaim her position as student president and races toward the school.

As they follow Diamond Tiara to the school, the Crusaders try to convince her to rise above her hostility and be a better pony. Despite their words, however, Diamond Tiara appears intent on sticking to her old ways.

Once Tiara and the Crusaders reach the school, Spoiled Rich comes out of a school board meeting and reprimands her daughter again for associating with common foals. Diamond Tiara ultimately stands up to her mother, casting aside her teachings and accepting the Crusaders as friends. After giving Spoiled Rich a note to pass along to Filthy Rich, Diamond Tiara announces that she asked her father to donate money to the school for new playground equipment.

In a happier reprise of her earlier ballad, Diamond Tiara leads her classmates and other ponies in restoring the playground.

Apple Bloom realizes that, through all she and her friends go through trying to discover their true talents, lately they've succeeded in helping other ponies discover theirs. The Crusaders decide that whether or not they get their cutie marks, helping others and being together is what matters most.

With this revelation and a subsequent high-hoof, the Crusaders' bodies light up, and in a flash of bright light, shield-shaped symbols suddenly adorn their flanks.

As the Crusaders sing a reprise of their song from earlier, Pinkie Pie throws them a cute-ceañera in celebration, and Applejack, Rainbow Dash, and Rarity express how proud they are. A brief montage follows of the Crusaders' series-long journey, ending with a group photo that Spike sends to Princess Celestia and Princess Luna, in reference to the show's main title.

Spoiled Rich: It's bad enough you lost to that transplant from Trottingham, but imagine if you'd lost to one of those blank flanks.

Sweetie Belle: Is it weird that I feel bad for her?
Scootaloo: If it is, then... [sighs] I'm weird, too.
Apple Bloom: She wants to change, but she doesn't know how.
Sweetie Belle: Seems like she could use a friend or two to help her figure it out.

Diamond Tiara: Were you trying to get your cutie mark in spying? Is that on your little chart?

Diamond Tiara: I have to thank you, Crusaders. Obviously I've known since I got my cutie mark that my talent is getting other ponies to do what I want. I just asked my father if he could donate the money for the new playground equipment!

Applejack: Oh, sugarcube, if Mom and Dad were here, they'd be so proud of ya.

Apple Bloom: Well, what do you think, Crusaders? Were these cutie marks totally worth waiting for or what?
Sweetie Belle: Yeah! I can't wait to see who we're gonna help next! 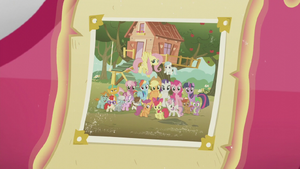