For coconuts, see Food and beverage.

Crusoe Palm, also called Coco Crusoe or Coconut, is a male background Earth pony who appears in multiple episodes throughout the show. He has a brown coat, light yellow mane, purple eyes, and a cutie mark of a coconut or palm tree on a desert island.​[​specify​]​ He is not named in the show, but he is named "Crusoe Palm" directly with a trademark symbol in first-party merchandise, "Coco Crusoe" directly sometimes with a trademark symbol in second-party merchandise and other media, and "Coconut" indirectly in another depiction.

His names "Crusoe Palm" and "Coco Crusoe" and cutie mark together allude to Robinson Crusoe.

Crusoe Palm is often shown directly from either the front or the back.

Crusoe Palm first appears at the Summer Sun Celebration in Friendship is Magic, part 1; in part 2, he appears in an identical shot in the previous episode recap and at Princess Luna's welcoming party in Ponyville. He appears briefly in Rainbow Dash's fantasy in The Ticket Master, at Applejack's appreciation party in Applebuck Season, and at numerous points in crowd shots in Boast Busters.

In Winter Wrap Up, Crusoe Palm appears several times during the titular musical number and at Sweet Apple Acres plowing snow. He watches the Iron Pony competition and Running of the Leaves in Fall Weather Friends, Rarity's fashion show in Suited For Success, the talent show in The Show Stoppers, and Fluttershy's second fashion show in Green Isn't Your Color.

Crusoe Palm appears several times in Over a Barrel, participating in "Mild West" dances and preparing Appleloosa for the buffalo invasion. At one point in the episode, he appears with a different, lighter coat color. He also appears in Twilight Sparkle's flashback in The Cutie Mark Chronicles.

Crusoe Palm appears in The Return of Harmony Part 2, running along the top and side of the screen following Discord's influence on Ponyville. In Luna Eclipsed, he briefly appears wearing the same hat he wears in Over a Barrel. He also appears in The Mysterious Mare Do Well, Hearth's Warming Eve, several times in The Super Speedy Cider Squeezy 6000, Hearts and Hooves Day, and A Friend in Deed.

In Putting Your Hoof Down, Crusoe Palm operates a fruit stand in the Ponyville marketplace and also attends Iron Will's assertiveness seminar. He appears at both wedding ceremonies in A Canterlot Wedding - Part 2 as well as the real wedding's reception.

Crusoe Palm appears briefly in One Bad Apple and Magic Duel, watching the Summer Harvest Parade in the former and in a crowd of ponies during Trixie's return in the latter.

Crusoe Palm watches the Summer Sun Celebration in Princess Twilight Sparkle - Part 2. In Pinkie Pride, he is seen dancing in Appleloosa and makes appearances during Pinkie the Party Planner, The Super Duper Party Pony, and The Goof Off.

Crusoe Palm appears several times in Simple Ways; in two shots, he is seen talking to Derpy. He watches three of the Pony Tones' performances in Filli Vanilli, has lunch at the Hay Burger in Twilight Time, watches the Breezies' migration in It Ain't Easy Being Breezies, and in seen at the after-party of the Cutie Mark Crusaders' play in For Whom the Sweetie Belle Toils. He watches Flim and Flam's sales pitch, once with short front legs, and the Ponyville Swim Meet in Leap of Faith.

In Trade Ya!, Crusoe Palm is seen numerous times at the Rainbow Falls Traders Exchange. In one scene, he goes to trade for an antique chicken; Fluttershy attempts in vain to dissuade him, and Rainbow Dash chases him away from the stall.

Crusoe Palm appears in Twilight's Kingdom - Part 1 in an amphitheater full of ponies and in Appleloosa.

Crusoe Palm appears in Bloom & Gloom running from a twittermite swarm. Here, his cutie mark is of a guitar. He also appears as a rodeo spectator in Appleoosa's Most Wanted, in Canterlot in Princess Spike, and in Ponyville's shared dream in Do Princesses Dream of Magic Sheep?. In Crusaders of the Lost Mark, Diamond Tiara runs past him during Light of Your Cutie Mark, and in The One Where Pinkie Pie Knows, he appears walking with Sassaflash when Pinkie Pie walks to the Castle of Friendship, and again when she tries to stealthily make her cake deliveries.

In No Second Prances, Crusoe Palm attends Trixie's magic show. In Newbie Dash, he sits in the stands at the Wonderbolts' air show. In The Cart Before the Ponies, he does the wave during Derby Racers. In The Fault in Our Cutie Marks, he appears several times during Find the Purpose in Your Life and at Gabby's cute-ceañera.

Crusoe watches the medal ceremony in Celestial Advice, watches the Wonderbolts' performance in Parental Glideance, appears in the crowd for the Couture du Future Fashion Contest in Honest Apple, walks to Grand Pear's stand in The Perfect Pear, and laughs at Pinkie Pie in Fame and Misfortune. He has a speaking line in Triple Threat arguing with "Rainbow Stars" over a chair.

In Horse Play, Crusoe Palm appears in the audience for the School of Friendship play commemorating Princess Celestia's "Ones-versary". In The Break Up Break Down, he appears sitting with Goldengrape at the Ponyville Café during Hearts and Hooves Day. In The End in Friend, he spectates Rainbow Dash and Rarity's buckball game. In Yakity-Sax, he runs away upon hearing Pinkie Pie's poor yovidaphone playing at the park, spectates the Wonderbolts' derby, and runs away from Pinkie Pie as she plays her yovidaphone outside Sugarcube Corner. In The Washouts, he appears in the audience for both of the titular group's two Ponyville shows.

In The Beginning of the End - Part 2, Crusoe Palm appears as one of King Sombra's mind controlled slaves following him to Canterlot and battles the Mane Six when they arrive at the city's gates. In A Trivial Pursuit, he makes a cameo appearance walking through Ponyville with Royal Riff. In The Summer Sun Setback, he appears standing behind a fireworks cannon as Pinkie Pie fires several during the final Summer Sun Celebration in Canterlot. In A Horse Shoe-In, he appears in the audience for Octavia Melody and DJ Pon-3's concert. In Growing Up is Hard to Do, an orange version of him with a barrel cutie mark appears during the Appleloosa County Fair running at the out of the buckball stadium during the Fair's animal showcase when Bloofy creates a tornado inside.

In My Little Pony Equestria Girls: Friendship Games, Crusoe Palm appears alongside Golden Harvest, Daisy and Cherry Berry outside Ponyville town hall in one of the dimensional rifts opened by Midnight Sparkle.

In chapter 12 of the chapter book Rarity and the Curious Case of Charity, "The Ugly Truth", a brown stallion named Coconut appears as a Ponyville Choir member. He mistakes the mane-dyed Charity Sweetmint for Rarity, as his fellow choir members do, and has her redo his bow tie. The book does not explicitly identify this pony, but the book's author G. M. Berrow has identified Coconut as the same pony that the mystery packs have identified as Crusoe Palm and that the collectible card game and mobile game have identified as Coco Crusoe.[1]

Coco Crusoe is an a character in Gameloft's mobile game. The game's description of him states, "This pony is enchanted by warm island breezes and visits the tropics whenever he pleases!"

A mini-figure toy and collector card of Crusoe Palm are included in the twenty-third wave of mystery packs.

In Enterplay's collectible card game, Crusoe Palm is named "Coco Crusoe" on his card α #27 R, which shows him as in Winter Wrap Up and attributes to Ace the quote, "Yow! That pony doesn't know his own strength..." In the game's expansion set Absolute Discord, Crusoe Palm is named "Coco Crusoe" with a trademark symbol on his card #21 R, which shows him as in The Return of Harmony Part 2 and lists the quote, "I have no idea how I'm doing this, but it's pretty awesome, right?!"

"This is my seat! I saw it first!"
— Triple Threat

Coconut: I just wanted to know if you could redo my bow tie.
Coconut: Thanks, Rarity! Never could figure those things out.

— Rarity and the Curious Case of Charity

"I have no idea how I'm doing this, but it's pretty awesome, right?!"
— Enterplay collectible card game Absolute Discord #21 R card of Coco Crusoe 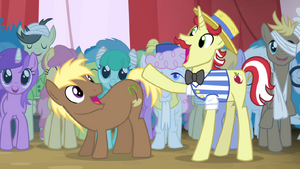