The Crystal Empire is a location that first appears in the two-part third season premiere of My Little Pony Friendship is Magic as the home of the Crystal Ponies. It is ruled by Princess Cadance and Prince Shining Armor and formerly by Princess Amore, then King Sombra.

The Crystal Empire first appears in the third season's opening two-parter The Crystal Empire, appearing in the arctic north of Equestria after a thousand-year-long disappearance. It is inhabited by Crystal Ponies and tiny ewes, and is described in the The Ballad of the Crystal Empire as having a rich culture and long history, including "the Crystal Kingdom anthem". Local food in the empire includes crystal berries that are used to make sweets and crystal corn.

Before the emergence of Nightmare Moon, the Crystal Empire was taken over by the evil unicorn King Sombra, who turned it into a dark land and enslaved the Crystal Ponies. Princess Celestia and Princess Luna defeated him with their magic, turning him to shadow and imprisoning him in the ice of the arctic north, but not before he placed a curse on the Crystal Empire that caused it to vanish for a thousand years. After it returns, the Crystal Ponies have no memory of their kingdom before King Sombra took over. King Sombra also returns and threatens to invade the empire again, so Shining Armor and Princess Cadance are sent by Princess Celestia to defend it, projecting a defensive magical barrier around it.

Cadance returns the Crystal Heart to its original place. The citizens, using its power to unleash an explosion of love and light that restores the Crystal Empire, temporarily turn Cadance, Shining Armor, Spike, and the Mane Six into Crystal Ponies and destroy Sombra, along with his black crystals.

The population of the empire consists of ponies whose manes are usually tied back with ribbon. The crystalline effect that distinguishes them is a form of magic that is exclusive to the area inside the Crystal Empire. Most mares share Maud Pie's eye design.

The Crystal Empire is symbolized with a purple flag "of many hues" with a ringed snowflake in the center which mimics the layout of their city. "Of many hues" implies that the flag, which is mainly purple, is made with an iridescent fiber.

In Games Ponies Play, Twilight and her friends visit the Crystal Empire to welcome the Equestria Games Inspector, whom they believe Ms. Peachbottom to be. They try to give her a tour of the castle, which fails because they have hardly been in the castle themselves. This episode also shows a spa in the empire, complete with a mud bath, and a newly built stadium near the castle.

The Crystal Empire is mentioned in Princess Twilight Sparkle - Part 1.

In Flight to the Finish, Ms. Harshwhinny sends Cheerilee's class to the Crystal Empire stadium for a contest to decide who will carry the Ponyville flag for the Equestria Games. After being the "stupendously the single most amazing thing [she's] ever seen", Ms. Harshwhinny selects the Cutie Mark Crusaders to carry Ponyville's flag at the Games.

The Crystal Empire is mentioned multiple times in Three's A Crowd, and a Crystal Empire train, first shown in Rarity Takes Manehattan, that Princess Cadance rides to Ponyville is also shown.

In the episode Equestria Games, Spike lights the torch for the Equestria Games opening ceremonies. The Crystal Ponies consider the young dragon a hero for his role in the defeat of King Sombra, even making a crystal statue in his honor.

In Twilight's Kingdom - Part 1, Twilight returns to the Crystal Empire with her friends to assist the other princesses in welcoming the duke and duchess of Maretonia. After the dignitaries leave, Twilight explains to the princesses that she is uncertain about what her role as a princess in Equestria is. Later that night, Celestia experiences a vision involving Lord Tirek; she reveals this information to Twilight the next morning and also reveals that she will task Discord in tracking down the villain.

In Party Pooped, Pinkie Pie passes through the Crystal Empire on her way to Yakyakistan.

In Do Princesses Dream of Magic Sheep?, the Crystal Empire appears briefly in Pinkie Pie's dream.

In The Cutie Re-Mark - Part 1, in an alternate timeline created by Starlight Glimmer, the Crystal Empire returns and falls under Sombra's control once again. Using the Crystal Ponies as his army, Sombra expands the empire's borders and conquers much of Equestria.

In The Crystalling - Part 1 and Part 2, the Empire holds a "Crystalling" ceremony for the newborn royal baby Flurry Heart. However, Flurry Heart unintentionally shatters the Crystal Heart, which threatens the Empire with eternal winter. Through Sunburst's magic knowledge and Flurry Heart's Crystalling, the Heart is restored.

In The Times They Are A Changeling, the Empire is placed on high alert due to the reported presence of a changeling. However, the changeling in question - named Thorax - befriends Spike and is allowed to stay in the Empire when he is discovered to be friendly.

In Celestial Advice, Twilight creates a simulation of the Crystal Empire when considering where to send Starlight Glimmer after she graduates from being her student, giving thought to having her continue her magic studies with Sunburst. In It Isn't the Mane Thing About You, the Crystal Empire briefly appears when "Silver Medal" discovers his baldness as a result of his mane being teleported.

In The Parent Map, a mail courier pony delivers mail to Sunburst's house in the Crystal Empire. In A Rockhoof and a Hard Place, Twilight and Rockhoof meet Mistmane at the Crystal Empire, who has become its royal landscape artist.

The Empire is also mentioned in Sounds of Silence, Father Knows Beast, and School Raze - Part 1.

In The Beginning of the End - Part 1, the Crystal Empire is reconquered by the resurrected King Sombra, but freed soon after when Twilight and her friends use the Elements of Harmony to (seemingly) defeat him.

In The Ending of the End - Part 2, Twilight is shown to have retreated to the Crystal Empire after her friends helped her escape Queen Chrysalis, Lord Tirek, and Cozy Glow.

In My Little Pony Equestria Girls, the Crystal Empire is the venue for a "princess summit." During this time, Sunset Shimmer uses the Crystal Mirror, once located in Canterlot Castle but moved to the Crystal Castle, to sneak into Twilight Sparkle's room and steal the element of magic.

The square lies at the center of the Empire, where the Crystal Castle is located. In the series, it is depicted as a peaceful place with a lot of buildings and working Crystal Ponies.

There is a snowflake pattern on the ground, spreading out from the Crystal Heart.

The Crystal Castle is the home of the royal rulers of the empire. It has a huge crystal tower which fires a ribbon of energy into the sky whenever the Crystal Heart below is powered.

During King Sombra's rule, the Crystal Castle had a much darker appearance and strongly resembled Barad-dûr from The Lord of the Rings.

The Crystal Empire is home to an immense library with decorative griffon statues outside its front doors. Amethyst Maresbury serves as its librarian. Twilight and her friends visit the library in search of information about the Empire's history.

Another library, shown in the IDW comics' My Little Pony: Friends Forever Issue #4, is part of the Crystal Castle. Lexicon serves as its librarian.

The Crystal Empire spa is first shown in Games Ponies Play, with Twilight and her friends meeting Princess Cadance there. One of the spa's signature luxuries is a crystal mud bath.

The main city of the Empire is also home to a huge stadium, on one occasion used to host The Equestria Games. It is a huge structure, capable of seating many thousands of ponies in the wrap-around grandstands. As well as regular seating, the stadium also features a special seating box for VIP spectators, including customized seating for the Alicorn Princesses.

The home of Sunburst, first shown in The Crystalling - Part 1. It is a small house, shaped like a classic wizard's hat. The interior is filled with shelves containing books on many magical spells and their history.

A large garden filled with crystalline plantlife, tended to by Mistmane since she became the Crystal Empire's royal landscape artist. It appears during A Rockhoof and a Hard Place.

The Crystal Faire is a celebration established by the Crystal Empire's first queen and is the Crystal Ponies' most important tradition.

The Crystalling is a Crystal Empire tradition held for Empire newborns in which the parents collect the light and love of the Crystal Ponies in the purest crystal they can find (which is then added to the Crystal Heart) and a designated "Crystaller" presents the baby to the public. Through this ceremony, the Crystal Heart is made even stronger.

In The Journal of the Two Sisters, a young Celestia and Luna go to visit the Crystal Empire, which was ruled over by the unicorn, Princess Amore. A dragon steals the crystal heart and takes it to his home in the Crystalline Mountains. In Starlight Glimmer and the Secret Suite, the Crystal Empire is mentioned, with Twilight wanting Starlight Glimmer to go there and visit Sunburst. In Princess Cadance and the Spring Hearts Garden​[​specify​]​.

In My Little Pony: FIENDship is Magic Issue #1, Amore's reign over the empire is brought to an end by a young Sombra. The empire serves as the setting for the four-part story arc Siege of the Crystal Empire, in which the empire is invaded by an alliance of villains assembled by Sombra's childhood friend Radiant Hope. It is revealed that the umbrum once ruled over the region and terrorized the Crystal Ponies; Sombra's goal is to free the umbrum imprisoned beneath the empire. In the two-part story arc Tempest's Tale, Tempest Shadow travels to the Empire and, on a mission for Princess Cadance, reunites with her old friend Glitter Drops.

In My Little Pony: Nightmare Knights Issue #2, Princess Luna and Stygian travel to the Crystal Empire to recruit Tempest for their team. In the five-part story arc Cosmos, the Empire's Crystal Market is revealed to be the hiding place of one of the Andalusian Stars which contain Cosmos. It later serves as the setting for the showdown against the restored Cosmos.

The Crystal Empire appears in the final issue of the My Little Pony Transformers miniseries. The alliance of Queen Chrysalis and the Decepticons attack the Empire in hopes of stealing all the magic items in the castle.

Known residents of the Crystal Empire: 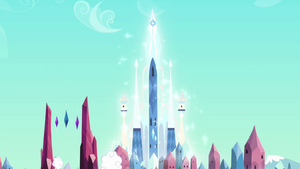