The Cutie Map is a magical map of Equestria that is first featured in The Cutie Map - Part 1. Twilight Sparkle and her friends use the map to solve friendship problems across Equestria.

The Cutie Map is featured on the Season 5 DVD cover. In the Equestrian Odysseys expansion set of Enterplay's collectible card game, card #216 UR is of the Cutie Map. 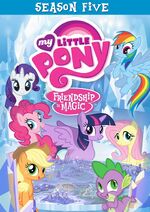 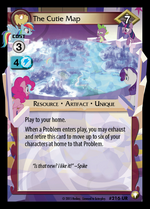 Add a photo to this gallery
Retrieved from "https://mlp.fandom.com/wiki/Cutie_Map?oldid=1693902"
Community content is available under CC-BY-SA unless otherwise noted.