The Cutie Mark Crusaders' human counterparts appear in the My Little Pony Equestria Girls franchise. They are a trio of Canterlot High School freshmen consisting of Apple Bloom, Scootaloo, and Sweetie Belle.

In My Little Pony Equestria Girls, the Cutie Mark Crusaders appear as students of Canterlot High School. Among the three, only Scootaloo has no speaking roles. They first appear passing by Twilight Sparkle and Spike in the school hallway; Scootaloo in particular nearly crashes into Twilight with her scooter.

Later, in the school library, the Crusaders dance to a music video they uploaded to the internet, but Miss Cheerilee scolds them for using a school computer for non-research purposes and confiscates their speaker. Apple Bloom suggests that it's for the best and points out the video's comments, one of which calls the video the "funniest thing I've ever seen". The Crusaders take this to mean they should try comedy and run off.

The Crusaders also appear in the school cafeteria during the Equestria Girls song. Near the end of the film, they attend the Fall Formal dance and fall under Sunset Shimmer's hypnotic trance. When the dance continues after Sunset's defeat, Rainbow Dash picks up Scootaloo and flies her around the gymnasium.

In My Little Pony Equestria Girls: Rainbow Rocks, the Crusaders participate as a competing musical act in the CHS Musical Showcase. At the beginning of the film, when Sunset Shimmer offers to help them with their banner, they nervously decline. In the cafeteria, the Crusaders fall under the Dazzlings' spell and face off heatedly against their fellow students.

In the Battle of the Bands, the Crusaders wear costumes similar to the ones their pony counterparts wear in The Show Stoppers. They triumph over Derpy's band, but they are eliminated by Flash Sentry's band. At the end of the film, they walk with Sunset Shimmer in the hallway during Shine Like Rainbows.

Apple Bloom is the only Crusader with a speaking role in the film. Claire Corlett is credited in the film's end credits as Sweetie Belle, but she does not have any lines of dialogue.

In Music to My Ears, the Cutie Mark Crusaders pass by DJ Pon-3 on the street while she listens to dubstep on her headphones. In Shake Your Tail, Apple Bloom briefly appears among a crowd of Canterlot High students during the Rainbooms' performance. While sitting on Big McIntosh's shoulders, she hits a beach ball into the air. In Perfect Day for Fun, the Crusaders dance during the Rainbooms' concert and gather together for a group photo with Vice Principal Luna, Big McIntosh, Miss Cheerilee, Spike, Trixie Lulamoon, Granny Smith, DJ Pon-3, and Flash Sentry. In the encore short My Past is Not Today, the Crusaders briefly appear alongside other Canterlot High School students, rejecting the reformed Sunset Shimmer during the second verse.

In My Little Pony Equestria Girls: Friendship Games, the Cutie Mark Crusaders make non-speaking appearances. At the beginning of the film, Rainbow Dash gives them a private performance on her guitar. They later appear in the library, in the gym during the CHS Rally Song, and at Crystal Prep Academy's welcoming party. The Crusaders cheer on the Canterlot Wondercolts during the Friendship Games, and they appear in a photograph during the end credits.

In A Photo Booth Story, the Crusaders have their photo taken by Photo Finish, but it does not meet her high expectations. In Raise This Roof, Apple Bloom and Scootaloo compete in a dance-off with Applejack and Rainbow Dash respectively at the Fall Formal. In The Art of Friendship, Apple Bloom appears drawing in art class.

The Crusaders get their first starring role in The Canterlot Movie Club, in which they help Pinkie attempt to locate her missing Gummy doll. Notably, Scootaloo makes her first speaking appearance. In Good Vibes, the Crusaders carry a canoe out of Rainbow Dash's sporting goods store at the Canterlot Mall.

In School of Rock, the Crusaders attend Maud Pie's lecture at the Canterlot History Museum. They also briefly appear in the cafeteria in Queen of Clubs, and Sweetie Belle runs past Sunset Shimmer as the latter reads the former's thoughts in Overpowered. In Best in Show: The Pre-Show, Apple Bloom has Winona enter the Canterlot High pet show, as a surprise for Applejack. Sweetie Belle then briefly appears walking past Fluttershy when the pre-show festivities finish. In Best in Show: The Victory Lap, Apple Bloom and Winona are seen at the end of the show. In FOMO, the Crusaders appear talking to each other by the school parking lot. In Festival Looks, Sweetie Belle appears in a computer video call profile picture.

In the Twilight Sparkle ending of the Choose Your Own Ending short Best Trends Forever, the Crusaders briefly appear wearing glasses. Throughout the shorts involving the school play, they appear playing minor roles as coal miners. In Happily Ever After Party, they attempt to retrieve the school projector for the cast party from Mr. Cranky Doodle with the help of either Applejack, Rarity, or Rainbow Dash, depending on the viewer's choice.

In Forgotten Friendship, the Crusaders appear at the very beginning before We've Come So Far, in Wallflower Blush's memories of the Battle of the Bands, and at the end with their school yearbooks.

In "Saving Pinkie's Pie", Apple Bloom takes part in a big snowball fight. In "The Cider Louse Fools", Twilight Sparkle helps Apple Bloom and her family outwit Flim and Flam when they try to swindle them out of their holiday cider, and Twilight makes cardboard cutouts of Scootaloo and Sweetie Belle to fool the brothers. In one flashback, Apple Bloom adopts a pet worm as part of one of the brothers' schemes and names it Colonel Wigglesworth. In "Dashing Through the Mall", the Crusaders make a background cameo at the Canterlot Mall. In "O Come, All Ye Squashful", Apple Bloom appears in past Apple family photos on Applejack's phone.

In the My Little Pony: Equestria Girls Holiday Special, the Crusaders create the online profile "Anon-a-Miss", posting other students' embarrassing secrets and framing Sunset Shimmer out of jealousy. They eventually come clean and take down the profile, and Sunset and her friends forgive them, but they receive six months of detention from Principal Celestia.

In the My Little Pony Equestria Girls screenplay adaptation Through the Mirror, the Cutie Mark Crusaders have additional dialogue when Twilight Sparkle's friends are distributing pony ears and tails to students. In the second film's adaptation Rainbow Rocks: The Mane Event, Apple Bloom and Sweetie Belle have additional dialogue after Principal Celestia announces the Rainbooms are moving on to the finals.

They may only be underclassmen, but Sweetie Bell[sic], Scootaloo and Apple Bloom sure know how to have a good time. Whether they're nearly running down Twilight & Spike in the halls, losing battle of the bands, or cheering on the Canterlot Wondercolts, they stick together through thick and thin.[2]

Equestria Girls dolls of Apple Bloom, Sweetie Belle, and Scootaloo were released together in a 3-pack as part of the Target-exclusive Wild Rainbow line and are listed on Hasbro's website.[3] The dolls' packaging names the three "The Cutie Mark Crusaders" with a trademark symbol and states, "These three best friends show off their wild and colorful style together!"

Apple Bloom: No! The Crusaders are gonna win!

Sweetie Belle: Aw, c'mon! I can be cool!

Scootaloo: Anon-a-Miss got out of hand. People started sending her other secrets, new pictures... We posted everything.
Sweetie Belle: We're so sorry! We had no idea what would happen to you!

Sweetie Belle: Thanks for inviting me and Apple Bloom and Scootaloo along, even after... what we did.

My Little Pony: Equestria Girls: Through the Mirror

Scootaloo: What are these?
Apple Bloom: My sister used to wear 'em back when she was our age—they rock! And, look, your sister's wearin' 'em, too, Sweetie Belle!
Sweetie Belle: Go, Twilight Sparkle!

Sweetie Belle: Thanks a lot, Rarity! Now my friends and I will never be the rock stars we were obviously meant to be! All because of you.
Apple Bloom: Worst. Sister. Ever. 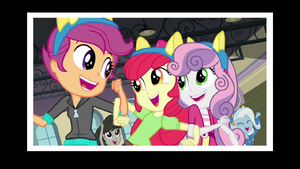