/ˈdiːdʒeɪ poʊnˈθriː/ DEE-jay pone-THREE)[note 1] is a female unicorn pony disc jockey who makes several appearances in the series, IDW comics, chapter books, and promotional material. She is called Vinyl Scratch in some merchandise, one of which specifies that as being her real name in-universe with "DJ Pon-3" being a stage name; both names were given by fans.[note 2] While she has never spoken in the show, she has had several lines in the Friendship is Magic comics and the Enterplay collectible card game.

While DJ Pon-3's coat appears white in Suited For Success due to the lighting of the scene, a layout artist on the show noted that the character model's coat color is actually a very pale yellow, specifically the 24-bit hex triplet #FEFDE7.[3] This is more clearly seen in the episodes A Canterlot Wedding - Part 2 and Magical Mystery Cure. Her coat color in the DJ Pinkie Pie game is the same, while her Playful Ponies toy is white. Her eye color is also shown in the episodes A Canterlot Wedding - Part 2, Testing Testing 1, 2, 3, Slice of Life, and A Hearth's Warming Tail to be moderate cerise, the same as that of Rainbow Dash and many other ponies.

DJ Pon-3's cutie mark is the mirror image of two bridged eighth notes. It appears as such on the show, on a trading card, and on websites (all showing the left side of her body),[4] but it appears non-mirrored (when showing the right side of her body) on her toy,[5] on the Season 2 poster, and on websites.[6] In the IDW comics' My Little Pony: Friendship is Magic Issue #11 story neigh anything..., Shining Armor's flashback shows her getting her cutie mark watching him, Poindexter, 8-bit and Gaffer perform to get the attention of Princess Cadance.

DJ Pon-3 first appears in Suited For Success for a brief three-second moment during the opening of Rarity's first fashion show, operating a turntable with her unicorn magic.

During the post-wedding party in A Canterlot Wedding - Part 2, Pinkie Pie pulls her up from under the turntable and they spin the records. She briefly lifts her glasses, revealing her magenta-colored eyes before placing them back and nodding to the beat.

During What My Cutie Mark Is Telling Me in Magical Mystery Cure, she appears at Sugarcube Corner as one of the ponies Fluttershy fails to make laugh.

She makes a cameo appearance in a crowd shot in Simple Ways. In Testing Testing 1, 2, 3, she is shown providing music during Pinkie Pie's song The rappin' Hist'ry of the Wonderbolts and reveals her magenta-colored eyes again. She makes another brief background appearance near the beginning of Inspiration Manifestation.

In Bloom & Gloom, in Sweetie Belle's dream, DJ Pon-3, seated at a table with Octavia Melody and Rarity, watches Sweetie about to sing on stage, but Sweetie sees her cutie mark is a broom and her microphone replaced with a broom. As a result, both DJ Pon-3 and Octavia give her a score of "0", while Rarity gives her a score of "1".

DJ Pon-3 appears in the series' 100th episode Slice of Life. She is first seen listening to hip-hop on her headphones when she leads Dr. Hooves to the bowling alley. In the episode, it is revealed that she is roommates with Octavia Melody. She helps Octavia spice up the music she plays for the wedding. In the original script, she had some speaking lines, but she was made mute at the insistence of Hasbro; originally she and Octavia were not roommates, but this was also requested by Hasbro. [7]

She and Octavia appear during the final group shot in The Cutie Re-Mark - Part 2.

In No Second Prances, DJ Pon-3 is referred to by name when Twilight Sparkle suggests that Starlight Glimmer become friends with her. She later attends Twilight's dinner party at the Castle of Friendship.

She appears in A Hearth's Warming Tail in the story within the story as a musician at Snowdash's party spinning the gramophone alongside violinist Octavia.

In The Saddle Row Review, it is revealed that DJ Pon-3 has her own dance club in Manehattan. In 28 Pranks Later, she briefly appears in a background shot of Ponyville as a "zombie".

In Celestial Advice, she plays the music for the party. In It Isn't the Mane Thing About You, she appears next to Octavia at the Ponyville marketplace. In Uncommon Bond, Starlight Glimmer talks to DJ Pon-3 about her friend Sunburst, oblivious to the fact that she is listening to music on her headphones.

In Fake It 'Til You Make It, DJ Pon-3 is one of the potential ponies Rarity asks to run her Manehattan shop. In Grannies Gone Wild, she hosts a dance club in Las Pegasus.

In My Little Pony Best Gift Ever, DJ Pon-3 makes a cameo appearance listening to her headphones beside Octavia Melody in Ponyville Square during One More Day.

In The Beginning of the End - Part 2, DJ Pon-3 appears brainwashed by King Sombra and part of his raid of Canterlot Castle. In She's All Yak, she appears in the reused image of The Cutie Re-Mark - Part 2 during Fit Right In. In A Trivial Pursuit, DJ Pon-3's head appears on Twilight's T-Shirt during the cold open.

In A Horse Shoe-In, DJ Pon-3 appears during Octavia's concert field trip, playing her DJ system as Octavia plays her cello. In The Last Problem, DJ Pon-3 briefly appears in Rainbow Dash's group shot during The Magic of Friendship Grows.

In My Little Pony The Movie, DJ Pon-3 appears providing music during the Friendship Festival, particularly during Songbird Serenade's performance and in the closing credits.

My Little Pony: Friendship is Magic

DJ Pon-3 appears in Issue #2 in the audience of Pinkie Pie's baking show.

In My Little Pony/Transformers II Issue #3, DJ Pon-3 (referred to as Vinyl Scratch) and Octavia find the Young Six after they were transported to Cybertron, and they work together with Soundwave to free themselves from being trapped under tons of Cybertronian steel.

In Signature My Little Pony magazine issue #42, DJ Pon-3 is featured in the eight-page comic story Save DJ Pon-3's show! When a heavy rainstorm prevents DJ Pon-3 from putting on a concert, the Mane Six cheer her up by putting on an indoor party and having her perform. Like the Rainbow Rocks animated shorts novelization, DJ Pon-3 has no speaking lines and communicates using gestures. On page 2 of the comic, her eyes are red instead of magenta.

DJ Pon-3's name is mentioned in the Equestria Girls commercial where it is pronounced "Dee jay pon-three." The video also references bronies and other online Friendship is Magic phenomena. Her name was later spelled as "DJ Pon3" in the "There's a Pony For That" commercial.

DJ Pon-3's brief appearance at a turntable in A Canterlot Wedding - Part 2 was featured in several advertisements[8] and other promotional material, such as a computer wallpaper. One of the Flash assets on The Hub's website depicts her, when the Flash file is decompiled and its assets are rearranged, with magenta irises underneath her purple-pink glasses,[9] prior to their appearance in the show. One of the backgrounds on Hasbro's Pony Wedding site depicts her with the same eye color.[10]

DJ Pon-3 briefly appears in the My Little Pony: Pony Life episode Whoof-dunnit. Like in Friendship is Magic, she is voiceless, communicating only through dubstep sounds and physical movements. In The Comet Section, she provides music for several of Rarity's comet-viewing parties.

DJ Pon-3 appears in Pinkie Pie and the Rockin' Ponypalooza Party! In the final chapter of Fluttershy and the Fine Furry Friends Fair, she DJ's for a party when Angel suddenly decides to start showing off his own DJ skills.

In Princess Luna and the Festival of the Winter Moon, Apple Bloom refers to DJ Pon-3 by name when she says that she and Octavia loaned the Crusaders some moonglasses for the titular festival.

DJ Pon-3 is a character in Gameloft's mobile game; two versions exist, one residing in Ponyville and the other in Canterlot. The former is a boss in the "Rarity's Retro Revolution" event. At home behind a turntable, DJ Pon-3 is known for her amazing beats and trademark sunglasses.

DJ Pon-3 appears in episode 1, The Royal Wedding, and in a photograph in episode 3, All About Alicorns.

DJ Pon-3 appears in episode 1 of Rarity's Peek Behind the Boutique, "Fashion Do's and Don'ts".

When a party needs the hottest music in Equestria, there's only one pony to call: DJ PON-3!

DJ PON-3 is Equestria's hottest musical act! What's her real name? Nopony knows. She's mysterious like that. Got an event that needs a few jams? DJ Pon-3 has a turntable! She can spin all night long and never break a sweat. Check out some of the tracks she's got, ready to go!

On 11 February 2012, Hasbro's My Little Pony Facebook page announced that a DJ Pon-3 toy would come out in Fall 2012, as part of a Toys 'R' Us exclusive pack, later revealed to be part of the Toys 'R' Us exclusive Collector Series and to be named the Friendship Is Magic Favorite Collection Featuring Nightmare Moon. In the initial announcement, DJ Pon-3 was called a "fan favorite."[11]

DJ Pon-3, along with a host of characters from the show, appears on the Comic Con 2011 promotional poster.

She also appears as a 2013 Comic-Con Exclusive donning Swarovski crystals on her horn and sunglasses.

A remix album featuring EDM remixes of songs from the series entitled "DJ PON-3 Presents My Little Pony Friendship is Magic Remixed" was released on June 23, 2015 by Lakeshore Records and Hasbro.[13]

Series 1 of Enterplay's trading cards includes a DJ Pon-3 & Octavia base collectable card, #27 of 84, with the description "DJ Pon-3 and Octavia may both be at the top of their musical games, but their careers are very, very different! You can find Octavia at garden parties and galas performing prim and proper classical music on her cello. On the other hoof, DJ Pon-3 feels at home behind her turntable, laying down sick beats and wearing her trademark sunglasses. Are these two bitter rivals, or are they long time friends? Will they ever perform a duet? Only time will tell!"

Series 2 of Enterplay's trading cards includes a DJ Pon-3 special card, #F41, with the description "No ultimate pony party is complete without the wicked beats of DJ Pon-3! This musical pony is rarely seen away from a turntable, and never without her infamous shades. Whether she’s spinning for a fashion show or the wedding of the century, DJ Pon-3’s got what it takes. Not many ponies know that DJ Pon-3 is actually a stage name, and her real name is Vinyl Scratch. No matter what name you know her by, if your bass needs dropping, this is the pony for the job!"[14]

WeLoveFine sells several fan-designed T-shirts and other merchandise featuring DJ Pon-3. One bears the name "Vinyl Scratch", and the titles of some others refer to her by that name.

Beginning with The Maud Couple, DJ Pon-3 was added to the opening intro.

"Wanna make somethin' of it?"
— Friendship is Magic Issue #10 cover A

"Why have I been wasting my time buying music? I can just steal it! To heck with you, intellectual property laws! My tunes must be free!"
— Friendship is Magic Issue #44 page 18

"Rising Star? Yeah, his music is pretty sick. And the louder you play it, the better it sounds."
— Enterplay collectible card game α #75 C card of Rising Star

"If you thought that one was good, just wait until my next mix!"
— Enterplay collectible card game Canterlot Nights expansion set card #194 UR of DJ Pon-3[16] 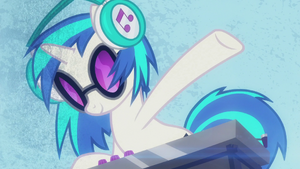