DJ Pon-3's human counterpart appears in the My Little Pony Equestria Girls franchise. She is a student at Canterlot High School.

DJ Pon-3 appears again in My Little Pony Equestria Girls: Rainbow Rocks. In one scene, she listens to music on her headphones in the cafeteria during the Dazzlings' song. She later appears at the Sweet Shoppe strutting to her own music in a similar fashion to Music to My Ears.

After the Dazzlings convince Trixie to trap the Rainbooms under the Mane Event stage, Spike arrives with DJ Pon-3 to rescue them. As Spike explains, DJ Pon-3 had been wearing her headphones throughout, making her immune to the Dazzlings' spell. With the Dazzlings on stage, DJ Pon-3 arrives with her Rockin' Convertible, converting it into a DJ station to provide music and speakers for the Rainbooms to defeat the Dazzlings. As the film ends, she is seen sitting behind a DJ booth on the stage as Sunset Shimmer writes to Princess Twilight.

DJ Pon-3 is the lead role in the musical short Music to My Ears, in which she struts through the city while listening to dubstep on her headphones. She passes by a policeman directing traffic and the Cutie Mark Crusaders, and she stops at the Sweet Shoppe to buy something to eat from Mrs. Cake. When she reaches Canterlot High School and dances through the hallways, Principal Celestia stops her and confiscates her headphones. As Celestia walks away, DJ Pon-3 continues listening to music on her earbuds. In Guitar Centered, DJ Pon-3 works at a music store and greets the Rainbooms as they enter. After Rainbow Dash wins over Trixie in their shred-off, she presents Rainbow Dash with the double-necked guitar that she and Trixie both coveted in. In Pinkie on the One, DJ Pon-3 makes a cameo in the cafeteria scene where Pinkie Pie drums with her silverware. In Shake Your Tail, DJ Pon-3 serves as a disc jockey during Twilight and her friends' performance of the titular song. In one shot, she operates a turntable. In a later shot, she dances while wearing the Canterlot Wondercolts ears and tail. In Perfect Day for Fun, DJ Pon-3 watches the Rainbooms' concert and poses for a smartphone photo.

Beginning with this short, DJ Pon-3's design is slightly altered; she wears sneakers instead of knee-high boots.

In My Little Pony Equestria Girls: Friendship Games, DJ Pon-3 adds some beats to Rainbow Dash's CHS Rally Song. She works a turntable during Pinkie Pie's party for the Crystal Prep Academy students, and she appears chatting with Lemon Zest at the end of the film.

In My Little Pony Equestria Girls: Legend of Everfree, DJ Pon-3 goes with her friends and classmates to Camp Everfree, where she is paired with Fluttershy in the Amethyst Tent. She mostly appears in background shots of student campers, usually bobbing her head to the music in her headphones.

In Raise This Roof, DJ Pon-3 appears performing at the Canterlot High Fall Formal. Get the Show on the Road title card background text includes "DJPN3" horizontally flipped. In Epic Fails, she makes a background appearance sitting in the school cafeteria. In Good Vibes, Twilight fixes her broken turntable, and she later performs at Rarity's mall boutique to attract customers.

In Overpowered, DJ Pon-3 appears in Pinkie Pie's memories sitting next to her. In Aww... Baby Turtles, she briefly appears standing on the beach with Octavia Melody. In the second season, she appears attending an advanced physics class in Schedule Swap. In I'm on a Yacht, she appears performing at a pool party on the Luxe Deluxe cruise ship. In Five Lines You Need to Stand In, she appears standing in the security line for the Starswirled Music Festival.

DJ Pon-3 is the main focus of one of the endings of Fluttershy's Butterflies, in which she helps with Fluttershy's audition for the school play by enamoring the audience with lights, music, and special effects. In the Rarity ending of Driving Miss Shimmer, she makes a background appearance walking down a sidewalk. In Opening Night and Happily Ever After Party, she appears in the school play audience. She is a main focus in the second season short The Last Drop, in which she performs "Starswirl" at the Starswirled Music Festival and selects an audience member for an interactive experience.

In Forgotten Friendship, DJ Pon-3 briefly appears in Applejack's memories performing with the Rainbooms in the climax of the Battle of the Bands. She later appears in a yearbook photo, and even later holding a yearbook in front of the school.

In Spring Breakdown, DJ Pon-3 makes a cameo appearance lying on a sunlounger while enjoying the spring break cruise aboard the Luxe Deluxe and expresses confusion when Rainbow Dash asks if anyone has seen "bad magic" aboard the yacht.

In My Little Pony Annual 2013, DJ Pon-3 appears on page 22 in a Canterlot High classroom with Fluttershy and on pages 41-43 and 45 watching the Wondercolts/Shadowbolts soccer game.

In the My Little Pony: Equestria Girls Holiday Special, DJ Pon-3 appears on pages 28 and 34 looking irritated due to "Anon-a-Miss"'s cyber-bullying.

Of the My Little Pony: Equestria Girls: Rainbow Rocks screenplay novelization of animated shorts, DJ Pon-3 appears on the cover and spine and, in the story, communicates through text messages rather than speech.

Always chill and ready to rock, DJ Pon-3 spins the hits Canterlot High loves to hear. When she drives up in her so-cool convertible wearing her signature shades, she commands attention without even saying a word.

DJ PON-3 is known by everyone at Canterlot High for her awesome taste in music and her rockin' style. She wears her signature shades and headphones all of the time, no matter what![1][2]

Three dolls of DJ Pon-3 have been released for My Little Pony Equestria Girls: Rainbow Rocks: a "Design & Decorate" doll with hairbrush and microphone, a "Neon" doll with backstage pass and headset, and a doll that is sometimes packaged with the Rockin' Convertible vehicle toy.

Another DJ Pon-3 doll has also been released for My Little Pony Equestria Girls: Friendship Games with the Canterlot High Playset.

"If you thought that mix was good, just wait until my next one!"
— Text message, Hasbro.com

"Don't forget… the louder you play, the better it sounds!"
— Text message, Hasbro.com 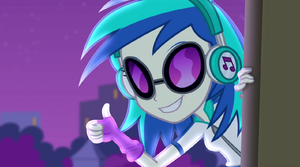 Retrieved from "https://mlp.fandom.com/wiki/DJ_Pon-3_(EG)?oldid=2150447"
Community content is available under CC-BY-SA unless otherwise noted.