Daring Don't is the fourth episode of the fourth season of My Little Pony Friendship is Magic and the sixty-ninth episode overall. When the release of the next Daring Do book is delayed, Rainbow Dash takes matters into her own hooves, leading her and her friends to make a shocking discovery about the series' author.

A clip of the opening scene with Rainbow Dash and Fluttershy was dubbed over by Ashleigh Ball and Andrea Libman and used to promote the series' season seven premiere on April 10, 2017.[2]

The episode opens with Fluttershy in a tree, teaching a pair of chicks to fly. Rainbow Dash suddenly swoops in, repeating "four more months" in excitement and asking Fluttershy if she is excited as well. Fluttershy admits to being "a little, kinda, sort of excited", but does not know what she should be excited about. Rainbow explains that the next Daring Do book is due for release in exactly four months time. She proceeds to imagine at length what the next book will be about and what adventures and dangers Daring Do will face, including the Fortress of Talacon and the series antagonist Ahuizotl.

In her over-excitement, Rainbow Dash soars past Fluttershy and straight into the tree. As the pair of chicks flutters around the dizzy Rainbow's head, Fluttershy begins to think Rainbow will not last another four months.

The book was delayed?

Rainbow Dash bounces her way toward the Golden Oak Library, excited that the release of the next Daring Do book is now three months and twenty-six days away. She enters the library to find Twilight Sparkle, Pinkie Pie, Rarity, Fluttershy, and Applejack are celebrating "National Random Holiday Party Day". Rainbow Dash wonders why no one invited her; Applejack says that she had invited Rainbow personally, but she was too distracted reading a Daring Do book. When Rainbow mentions the upcoming book, Twilight reveals that its release was pushed back by another two months.

Rainbow Dash starts to panic, unable to wait for the book even longer than before. What's more, she gets slightly frustrated at Twilight for knowing more about the series and its publishing than she does. Twilight reminds Rainbow that she introduced her to the series in the first place, adding that the author of the Daring Do books, A.K. Yearling, is her favorite author and she knows just about everything about her.

Rainbow Dash asks Twilight if she knows where A.K. Yearling lives. She concludes that A.K. Yearling delayed the book due to everyday distractions, and proposes helping the author. Twilight has reservations about violating the author's privacy but slowly comes around to the idea.

As she and her friends travel to a remote part of Equestria, Twilight is still uneasy about intruding upon A.K. Yearling's privacy. Her unease is interrupted when they come across a cottage in the middle of a forest. The six friends find the residence to be a complete mess and begin to fear for A.K. Yearling's well-being (and Rainbow begins to fear for the status of the next Daring Do book).

Suddenly, A.K. Yearling herself enters the house, wondering what Twilight and her friends have done to it. The six ponies deny having anything to do with the mess as Yearling starts searching for something. She locates a book with gold binding and a horseshoe on the cover, undoing a sort of lock on it to reveal a large golden ring. Yearling sighs in relief, saying only that "it's safe" before tucking the ring into her coat.

When Rainbow Dash asks about the new Daring Do book, A.K. Yearling ignores her and Twilight pulls her aside, saying that they should respect her privacy. Just then, Pinkie Pie calls attention to the three stallions sneaking into Yearling's house from a second-story window. The stallions confront Yearling inside, and she throws her coat, hat, and glasses at them. The author then dons a pith helmet and outstretches her wings.

"A.K. Yearling is Daring Do!"
— Twilight and Rainbow Dash

The Ring of Destiny

As Daring Do fends off the stallions and keeps the gold ring away from them, Twilight and her friends watch in awe from outside. Rainbow Dash distracts Daring momentarily when she calls out her name, allowing the stallions to subdue her, and the gold ring falls at the hooves of another stallion—Dr. Caballeron, another adversary of Daring's.

As Twilight and Rainbow flip out over both Daring Do and Dr. Caballeron being real ponies, Daring presumes that Dr. Caballeron is working with Ahuizotl, who Caballeron intends to sell the ring to. Caballeron and his henchponies take leave of the injured Daring, and the Mane 6 go to help her. Daring Do brushes them off and flies after Caballeron with her leg in a splint.

What follows is a back-and-forth between Twilight and Rainbow Dash about the events of Daring Do's books and whether or not to help her in her current adventure; they conclude that the ring Dr. Caballeron has is the last in a set of rings needed to complete a dark ritual and must be retrieved for safekeeping. Twilight decides that the six of them need a well thought-out plan, but Rainbow Dash soars off before they can make such a plan.

Rainbow catches up with Daring Do and, after fighting off the sheer elation of meeting her hero, says that she wants to help. Daring Do makes it clear that she works alone; having to deal with secrets all the time, she considers it best not to trust anyone. Rainbow states that just because some can't be trusted doesn't mean no one can be trusted. Despite Daring's attempts to get rid of her, Rainbow Dash is determined to help.

Rumble in the jungle

When night falls, Rainbow Dash and Daring Do find where Dr. Caballeron and his henchponies have set up camp. Daring Do makes a disguise for herself by squashing her helmet flat and covering her face with leaves to make a beard. With a large bag of bits, she approaches Caballeron and attempts to buy the ring from him. Caballeron prepares to sell, but Ahuizotl suddenly storms onto the scene and demands the ring. Caballeron makes off with the bits and leaves the ring behind.

Daring Do snatches the ring, revealing herself to Ahuizotl, and he sics his army of jungle cats on her. She fights the animals off while Rainbow Dash watches from the sidelines. Seeing Daring Do's hat on the ground, she picks it up and calls out to her. Her shouting gets Ahuizotl's attention, and he grabs her with his tail. Daring sees Rainbow Dash in danger and is once again distracted long enough for her to be subdued. Ahuizotl tosses Rainbow Dash aside, and he and his cats walk off with Daring Do in ropes. Rainbow once again offers to help, but Daring tells her not to bother, sarcastically saying she's helped plenty already.

Twilight and the others catch up with a sullen Rainbow Dash, who informs them that Daring Do and the ring have been captured by Ahuizotl. Kicking herself for getting involved when she shouldn't have, Rainbow decides it's time to head home. The others are surprised to see their friend give up on another pony so easily, and Twilight notes that Rainbow put Daring Do on so high a pedestal that she can no longer see her own worth; they wouldn't be who they are if they didn't help.

Somewhere beneath the Fortress of Talacon, Daring Do is seen restrained to a stone wall and over a pool of piranhas. Before taking leave with the ring, Ahuizotl pulls on a rope lever, causing the chamber to fill with more water. As the piranhas below snap their teeth, Daring Do manages to free her hooves from the wall. Before her weighted restraints pull her down, Rainbow Dash swoops in to her rescue. Once again, Daring asserts that she works alone; Rainbow comments that it's lucky for Daring that she doesn't.

In the fortress' central chamber, Ahuizotl prepares to use the ring to complete the ritual when Twilight and her friends appear. They snatch the ring away and fend off the attempts of Ahuizotl's henchponies to retrieve it. As the henchponies chase Twilight and company up and down the chamber, Rainbow Dash and Daring Do sneak toward the altar. At Daring Do's direction, the two remove the rest of the rings from a stone pillar, the removal of which will cause the fortress to collapse. Daring reveals to Rainbow that she'd planned to get herself captured all along so she could get inside the fortress, but she had not accounted for the rings' weight and admits that having help can be handy at times.

By the time Ahuizotl retrieves the ring from Twilight and her friends, Rainbow Dash and Daring Do have succeeded in causing the fortress's collapse. The ponies make their escape from the crumbling fortress, and amidst the rubble, Ahuizotl emerges and swears revenge on Daring Do.

After shattering the ring to pieces, Daring Do thanks Rainbow Dash for her help. She extends a hoofshake to Rainbow, but Rainbow suddenly hugs her instead. Once they part, Daring Do leaves to finish her book.

Some time later, as Rainbow Dash writes her friendship lesson in her friends' journal, a mailpony arrives with a package from A.K. Yearling: an advance copy of the new book, Daring Do and the Ring of Destiny. Rainbow opens the package and is overjoyed to see herself on the front cover alongside with Daring Do.

Rarity: The punch is quite tasty.
Pinkie Pie: You might say the secret ingredient is... [whispering loudly] a secret! [squee]

Rainbow Dash: Two more months?! I've been waiting so long already! I don't think I can take another two months! I'll never make it!
Fluttershy: Yeah. I can vouch for that.

Rarity: I hope A.K. Yearling's alright!
Twilight Sparkle: Oh no! What if something terrible happened to her?
Rainbow Dash: I know! There might be no more books! Uh... But, of course, I'd be worried about her, too. Heh.

Twilight Sparkle: A.K. Yearling and Daring Do are one and the same! My mind is officially blown!
Rainbow Dash: Aw, c'mon! I knew it all along!

Rainbow Dash: We've gotta go help!
Twilight Sparkle: You heard her! She says she works alone!
Rainbow Dash: How can we just stand by and do nothing? You know what's at stake here! Ahuizotl has sought control of the Tenochtitlan Basin since book three!
Twilight Sparkle: True, but in book four, she defeated Ahuizotl and secured the Amulet of Atonement, dispelling the dark magic of the Ketztwctl Empress, and thus protecting the basin with the Radiant Shield of Razdon!
Rainbow Dash: But the Radiant Shield of Razdon is vulnerable to the dark enchantment of the Rings of Scorchero!
Twilight Sparkle: Are you forgetting that the Rings were scattered to the four corners of Tenochtitlan, thus rendering the dark enchantment powerless?
Rainbow Dash: Only if you assume the Rings have yet to be retrieved, and the ring Caballeron just stole isn't the last ring to complete the dark tower and its cruel hold on Tenochtitlan! Did you ever think of that?!
Pinkie Pie: You gotta admit, Rainbow Dash makes a pretty good point.

Ahuizotl: The ring, Daring Do! Give it to me!
Daring Do: Now, Ahuizotl, you know I love you, but I can't give you the ring 'til I've properly proposed.

Daring Do: Bring it!

Rainbow Dash: Gotcha! [grunts] You can flap too, y'know!
[crushing rocks]
Daring Do: I was just about to save myself, y'know.

Applejack: Drop the ring, Ahui... whatever your name is!

Ahuizotl: Daring Do! I will have my revenge! 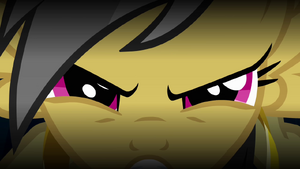