Lucky for her, she's a Pegasus.

Swept away by wings.

Stare into the eyes of a fangirl.

"You gotta be excited." 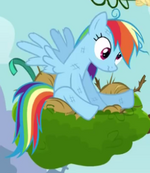 Hi. I'm Rainbow Derp.
Add a photo to this gallery

A party in a library? Weird.

"I know everything about her."

The award for the most attractive party hat goes to...

We have to move fast, and cover our tracks!

The rest of the Ponies just strolling as usual.

Looks like this house has been abandoned long ago...Or has just been robbed.

Pinkie, now's not the time to play "Queen of the Mountain".

Something terrible must have happened, for the mirror to be broken I cannot check my reflection.

"What are you all doing here?" said a shadowy figure.

Why Wub Too: Electric Scootaloo.

Hehehehe, can't hold in my excitement.

A.K. Yearling rolling her eyes at this crazy fanpony.

"A.K. Yearling has made it pretty clear that she wants to be left alone. We need to respect her wishes!"

Lord of the Ring.

"That's Dr. Caballeron to you."

Daring Do... Again we see there is nothing you can possess which I cannot take away.

Fluttershy: Shouldn't we go and help her, maybe?

"You heard her! She says she works alone!"

"How can we just stand by and do nothing?"

"Ahuizotl has sought control of the Tenochtitlan Basin since book three!"

"True, but in book four, she defeated Ahuizotl and secured control of the Amulet of Atonement, dispelling the dark magic of the Quetzalcoatl Empress, ..."

"...and thus protecting the basin with the Radiant Shield of Razdon!"

"But the Radiant Shield of Razdon is vulnerable to the dark enchantment of the Rings of Scorchero!" (PInkie's nodding her head as if she actually knows what they're talking about.)

"But are you forgetting that the Rings were scattered to the four corners of Tenochtitlan, thus rendering the dark enchantment powerless?"

"Only if you assume that the Rings have yet to be retrieved, and the ring Caballeron just stole isn't the last to completely restore the dark tower and its cruel hold on Tenochtitlan! Did you ever think of that?!"

Seriously, why are you hitting yourself?

I don't know, but my cheek's starting to hurt.

"I am suuuuuch a huge fan!"

"Can't believe I'm even talking to her..."
Add a photo to this gallery

Ah, sure. That beard is just as convincing as your A.K. Yearling disguise. (NOT!)

Ahuizotl: Not you, again !!

I can't watch but I have to because it's cool.

The duckface, or a close imitation of it at least.

That's one small kitten as a predator

And now we see the meaning of cat fight.

That going to be sore for a long while.

"Where does it hurt?"

Well, I guess I am with you guys.

Piranhas...Why did it have to be piranhas?

"Have I mentioned yet that I work alone?"

"Have I mentioned yet that you're lucky I don't?"

Daring Do trots off...

... and Rainbow Dash flies after her.
Add a photo to this gallery

"Drop the ring, Ahui....whatever your name is!"

How many rings can these pegasus ponies remove?

"Daring Do, I will have my revenge!" (Yeah, good luck with that.)

If you can't beat them, join them.

Bye, Daring Do! Looking forward to your next book!

Not sure why the mailpony looks unimpressed. 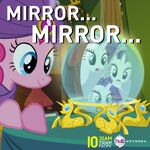 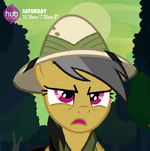 What is Daring Do going to face this time?
Add a photo to this gallery
Retrieved from "https://mlp.fandom.com/wiki/Daring_Don%27t/Gallery?oldid=2188148"
Community content is available under CC-BY-SA unless otherwise noted.