Daring Done? is the eighteenth episode of season seven of My Little Pony Friendship is Magic and the one hundred and sixty-first overall.

In this episode, Rainbow Dash and Pinkie Pie go on a mission to find out if A. K. Yearling is retiring from writing books.

In production order, this episode is season 7, episode 17.

This episode was previously scheduled to premiere on Canada's Treehouse TV channel on June 11, 2017, but was later replaced by a repeat of Forever Filly.

The episode was uploaded to the HasbroEpisodes YouTube channel on September 3, 2017, six days ahead of its scheduled premiere on Discovery Family, while being labeled as To Change a Changeling.

The sphinx was designed by Herring.[2]

The episode opens with Pinkie Pie buying a copy of the Ponyville Chronicle newspaper and mentioning to Rainbow Dash the various goings-on around Equestria, though Rainbow is largely uninterested. When Pinkie reads the headline "Author A. K. Yearling Announces Retirement", Rainbow's interest is instantly sparked.

"I can't believe that the greatest author and secret pony adventurer of all time, A. K. Yearling... is retiring!"
— Rainbow Dash

Rainbow Dash and Pinkie Pie race to A. K. Yearling's jungle cottage, with Rainbow believing her sudden retirement is covering up something terrible. At the cottage, Rainbow frantically knocks at the door, and Yearling invites them inside with a depressed expression. When asked why she's retiring so suddenly before her next book is published, Yearling explains that her latest adventure in Southern Equestria turned up multiple news articles disparaging Daring Do and blaming her for the damage that her adventures cause. This has caused her to lose confidence in herself as both an adventurer and as a writer.

Rainbow Dash is certain that the ponies Daring Do has helped far outnumber those she unintentionally harmed, and she suggests traveling to Southern Equestria to disprove the rumors circulating about her.

Upon arriving in the desert village of Somnambula, Rainbow Dash starts asking around about Daring Do, but the villagers condemn her for destroying several objects around the village, including the sacred statue of its legendary namesake. One of the villagers—a mysterious stallion in a red cloak—supports these claims, calling Daring Do "a menace who destroys everything she touches". A. K. Yearling's confidence is broken even more, and she runs out of the village in shame.

Determined to make Yearling realize that ponies appreciate Daring Do, Rainbow and Pinkie follow her to the Get On Inn, a barn-and-breakfast where she commonly stays during her adventures. There, they talk to the manager Mrs. Trotsworth about Daring Do, and Mrs. Trotsworth criticizes her for not only leaving without paying her bill but also luring a band of ruffians that destroyed half the rooms looking for her. In addition, there have also been recent reports of Daring Do stealing glowpaz from villagers looking to offer it to Somnambula's statue.

Rainbow and Pinkie find A. K. Yearling at an inn table, and they overhear the same red-cloaked stallion from earlier continue to publicly condemn Daring Do to the villagers. Yearling denies all allegations of stealing glowpaz, and Rainbow assures her that they'll fix all of this after a good night's sleep.

The next morning, Rainbow, Pinkie, Yearling, and the villagers congregate at the broken Somnambula statue in the village square. There, the stallion in the red cloak continues to publicly slander Daring Do's name. Rainbow Dash steps forward to challenge the cloaked stallion's claims, arguing that Daring Do's actions have been nothing but heroic. However, when she belittles the destroyed statue, one of the villagers speaks up to defend the legendary pony that the village was named after.

Long ago, the once-unnamed village fell under siege by an evil sphinx that demanded most of their crops as tribute. To keep the poor villagers from giving up hope, Somnambula used what little she had to give them food. Prince Hisan, the son of the pharaoh, was so moved by Somnambula's compassion that he stood up to the sphinx to free the villagers from her tyranny. However, the sphinx captured Hisan and told the pharaoh that she would only set him free if someone solved her riddle.

Somnambula volunteered to try and solve the sphinx's riddle: "I shine brightest in the dark. I am there but cannot be seen. To have me costs you nothing. To be without me costs you everything." Somnambula correctly answers "hope", enraging the sphinx. Fearing that the sphinx would go back on her promise to release Hisan, Somnambula asks for another challenge and tells the sphinx to leave the kingdom forever if she completes it. The sphinx challenges Somnambula to walk across a bridge to Hisan—blindfolded and without the use of her wings.

Guided by Hisan's voice and the power of hope, Somnambula succeeds, and the sphinx flies off in a rage. Hisan replaces Somnambula's pearls with a string of glowpaz as thanks for saving him, and glowpaz became the village's symbol of hope from then on.

Rainbow reminds the villagers of how both Daring Do and Somnambula fought to protect their home, but the stallion in the red cloak reminds them of how Daring Do destroyed the statue in the first place. As the villagers curse Daring Do's name, A. K. Yearling walks off with her reputation in ruins. Rainbow Dash finally confronts the cloaked stallion about his vendetta against Daring Do, and he reveals himself to be Dr. Caballeron. He thanks Rainbow for helping him break Daring Do's spirit once and for all, and he and his henchponies capture her before she can tell Daring the truth.

As Rainbow cries out for help, Pinkie Pie and A. K. Yearling see Caballeron and his henchponies drag her away. Pinkie follows Caballeron through the desert, and Daring Do—discarding her A. K. Yearling persona—follows shortly afterward. After the damage done to her reputation, Daring is unsure of herself, but Pinkie reminds her that she'd never let anything bad happen to Rainbow. With this boost in confidence, Daring pursues Caballeron to the pyramid, where he has trapped Rainbow Dash in the same way that the sphinx trapped Hisan in Somnambula's story.

Rainbow Dash starts to slowly sink into a pit of green slime, and the sphinx's magic still prevents the use of wings. Inspired by Somnambula's story, Daring Do and Pinkie Pie take a leap of faith, using steam vents to jump across the slime pit and save Rainbow. A short while later, the three intercept Caballeron and his henchponies as they leave the village. Glowpaz spills out of the large bag they're dragging, revealing them to be the ones who stole from the villagers.

Caballeron reveals that his defamation of Daring Do's name was to remove her from the picture so he could carry out his plans unhindered. However, Daring Do has gotten her confidence back, and with his evil plans exposed and the villagers turned against him, Caballeron runs off in defeat.

The villagers of Somnambula cheer for Daring Do, and she thanks Rainbow Dash and Pinkie Pie for helping her. Daring vows to try and be more responsible for her actions in the future and to never lose hope if she does something she didn't mean to do. With that lesson, she decides not to retire from writing books, and she uses her personal funds to replace the village's damaged carts, reimburse Mrs. Trotsworth, and restore the Somnambula statue.

Pinkie Pie: [reading] "Noodles Named Official Food Of Whinnyapolis". "Author A. K. Yearling Announces Retirement". "Cloudsdale Election Heating Up For Candidate In Favor Of Cooling It Down".
Rainbow Dash: What?! Let me see that!
Pinkie Pie: I never knew you were so into politics, Rainbow.

A. K. Yearling: I guess I've always been so focused on saving priceless relics and stopping the bad guys that I never really thought about the mess I leave behind.

Dr. Caballeron: Daring Do is a menace who destroys everything she touches!

Pinkie Pie: A good evening to you, madame. We are but weary travelers who humbly wish to inquire on the status of a certain mare of intrigue taking residence here.
Mrs. Trotsworth: What in Southern Equestria are you on about?

Dr. Caballeron: When I saw you, her closest friend, I knew that Daring Do would not be far behind. I really do owe you for leading her right to me.
Rainbow Dash: But I-I didn't mean to—
Dr. Caballeron: Thank you for helping me break Daring Do's spirit by destroying her reputation, but I can't have you running off and telling her my plan.

Dr. Caballeron: With the destruction you leave in your wake, it didn't take too much to convince ponies you were a villain!
Daring Do: You're wrong, Caballeron. And I won't let you break my spirit again. Because I'm never going to give up hope that I can protect ponies and ancient treasures from miscreants like you!

Daring Do: Thanks for helping me come to my senses. You two are true friends.

Pinkie Pie: Feel free to use that in your next book!
Daring Do: You know, I think I will. 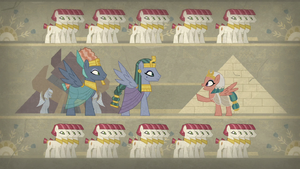