Daring Doubt is the twenty-first episode of season nine of My Little Pony Friendship is Magic and the show's two hundred and seventeenth episode overall.[1]

When another author releases his own version of the events in A. K. Yearling's Daring Do books, Rainbow Dash is furious, while Fluttershy is curious to know the truth.

This episode was originally scheduled to air on September 19, 2019 on Polish channel MiniMini+, but was replaced with a rerun of an earlier episode. However, it was still released the following day on the nc+ GO on-demand service.

The other Daring Do author

The episode begins with Fluttershy returning some Daring Do books that she borrowed from Rainbow Dash, having become another big fan of the book series. Fluttershy says she read the books all the way up to the most recently released entry, Daring Do and the Fallen Idol, but Rainbow Dash has never heard of this entry, explaining that A.K. Yearling always sends her advance copies of her books.

Fluttershy lends Rainbow her copy of The Fallen Idol, and Rainbow discovers the book was written by "Groom Q. Q. Martingale" from the villain Dr. Caballeron's point of view, portrays Daring Do in a very negative light, and even reveals that Daring Do is a real-life pony. Rainbow Dash is outraged by Martingale's libelous writing, but Fluttershy thinks the book gives valuable insight into Caballeron's perspective. Annoyed that Fluttershy is defending a known villain, Rainbow wants to warn A.K. Yearling before ponies realize she is Daring Do herself and her reputation is harmed further.

Rainbow Dash and Fluttershy travel to a bookstore where A.K. Yearling is doing a book signing, and a number of readers are harshly criticizing her over the content of Martingale's book. Yearling, having wanted to share the stories of her adventures as Daring Do with the public, is miserable that Martingale is ruining her character. Coincidentally, Martingale is doing a book signing right across the street from Yearling's, and Rainbow and Fluttershy go to confront him.

The two discover that "Groom Q. Q. Martingale" is Dr. Caballeron in disguise, and Rainbow Dash believes he created the Martingale persona to publish books that portray him as a hero. Rainbow confronts Caballeron about his new scheme to make Daring Do look bad, but Caballeron says he is just sharing his side of Daring Do's story with the public. Rainbow refuses to acknowledge Caballeron's claims, but Fluttershy offers to hear him out.

Caballeron explains that he and his henchponies unearthed ancient artifacts in order to preserve them in a museum, but Daring Do always intervened, refusing to team up with Caballeron and keeping the artifacts for herself. When Fluttershy mentions Caballeron's past attempt to sell an artifact to the highest bidder, Caballeron reveals he did so because Daring Do's actions caused his museum to go out of business.

As Fluttershy starts to consider the true consequences of Daring Do's actions, Caballeron thanks her for listening to his side of the story and invites her to accompany him and his team on an expedition to the Tenochtitlan Basin. Fluttershy accepts Caballeron's invitation in order to find out which of the two Daring Do authors is telling the truth, much to Rainbow Dash's shock.

Rainbow Dash hurries back to A.K. Yearling and brings her up to speed about what is going on. Yearling believes that Dr. Caballeron is going after the Truth Talisman of Tonatiuh, which cannot be reached without a Pegasus' flight, and that he tricked Fluttershy into joining him in order to obtain it. Discarding her A.K. Yearling disguise, Daring Do joins Rainbow Dash in her quest to stop Caballeron and save Fluttershy.

Deep in the Tenochtitlan jungle, Caballeron puts on a facade of wanting to preserve the local plant life and protect his henchponies from poisonous fruits for Fluttershy's sake. Fluttershy shares food with her new friends and pacifies the wild jungle cats before they can attack; Caballeron and his henchponies are impressed by Fluttershy's kindness and willingness to listen. Meanwhile, Rainbow Dash and Daring Do race to catch up with them before Caballeron can claim the Truth Talisman for monetary gain.

Dr. Caballeron and his team reach the temple that houses the Truth Talisman of Tonatiuh. As they attempt to gain entry into the temple, Fluttershy gives Biff positive reenforcement and saves Withers from a swarm of fly-ders. Close behind them, Rainbow Dash and Daring Do run into Ahuizotl, who believes they are also trying to claim the Truth Talisman. Rainbow and Daring escape from Ahuizotl just as Caballeron and his team open the temple entrance, and Rainbow and Daring follow them inside.

Race for the Talisman

While Rainbow and Daring Do navigate the temple's labyrinth-like structure, Dr. Caballeron and his team quickly make their way to the chamber of the Truth Talisman of Tonatiuh. Caballeron, over-dramatically playing to Fluttershy's kindness, convinces her to retrieve the Talisman with her flight. When Fluttershy triggers a booby trap and nearly falls into a pit of lava, Caballeron and his henchponies save her.

Just as Caballeron claims the Truth Talisman for himself, Rainbow Dash and Daring Do appear and demand he relinquish it. Fluttershy tries to convince them that Caballeron and his henchponies simply want to put the Talisman in a museum, but Caballeron is compelled by the magical properties of the Talisman to tell the truth. He reveals that he did indeed trick Fluttershy into joining him at first, but during their time together, he and his henchponies came to value her kindness and friendship.

Just then, Ahuizotl appears and commands a group of stone gargoyles to attack the temple intruders before trapping them inside the chamber. With Fluttershy's animal communication ineffective against creatures made of stone, Daring Do and Caballeron drive them off with bright light reflected off of a diamond artifact. The ponies all work together to escape the chamber and run into Ahuizotl again. They struggle to keep the Truth Talisman away from him, but he eventually traps them in a narrow dead end.

As the ponies wonder how they will escape, Fluttershy decides to reach out to Ahuizotl the same way she reached out to Dr. Caballeron earlier, and she asks him why he is trying to destroy them. Ahuizotl takes the Truth Talisman and, influenced by its magic, explains that he is one of several guardian creatures of Equestria tasked with protecting the artifacts of Tenochtitlan, a task made difficult by Daring Do and Dr. Caballeron's repeated artifact thefts.

Daring Do says she only took the artifacts because she believed she was protecting them, and she and Caballeron realize they were wrong about Ahuizotl. Rainbow Dash acknowledges the merits of listening to and trying to understand others, including those perceived to be villains and monsters. As gratitude for the ponies listening to his side of the story and returning the Truth Talisman, Ahuizotl allows them to leave—on the condition that Daring Do and Dr. Caballeron never steal any more artifacts from the Tenochtitlan Basin.

Upon discovering that Daring Do is A.K. Yearling, Caballeron proposes they co-write her next book. However, when they hold a book signing for it, they are upstaged by a third Daring Do author: Ahuizotl.

Fluttershy: Don't you think you should read Martingale's book first? Just to hear both sides of the story?
Rainbow Dash: Uh, why? The only true thing in that pack of lies is that Daring Do is real.
Fluttershy: There's also a lot of insight into Dr. Caballeron's life choices. Did you know he's actually a history professor and amateur bird watcher?
Rainbow Dash: Are you serious right now? A random writer trashes our friend and exposes her secret, and you want to talk about birds?!
Fluttershy: [whispers] Also spider cruelty.

Pony 1: Why didn't your books say Daring Do was real? This changes everything!
Pony 2: And why do you only write about her good side? Is she bribing you?
Pony 1: On page five-thirty-one, it says that Daring Do kicks puppies!
Foal: She does?!
A. K. Yearling: What?! No! Look, are any of you here for my actual book signing?

Rainbow Dash: This is totally different. [to Dr. Caballeron] Well, well, well! Up to your old tricks again, huh? Just like in Somnambula! Spreading lies to make Daring Do look bad!
Fluttershy: Would you sign our book?
Groom Q. Q. Martingale: I am just a simple author telling it like it is. Who should I make it out to?
Fluttershy: Fluttershy. With two "T"'s.

Rainbow Dash: Finally! What took you so long?
Fluttershy: I decided to find out which author is really telling the truth, so I joined Dr. C's Tenochtitlan expedition!
Rainbow Dash: Say whaaaaaaat?!

Dr. Caballeron: Fluttershy! Run! These ferocious beasts want to eat us for dinner!
Fluttershy, That's a common misconception. Have you ever tried just talking to them?
Dr. Caballeron: That's crazy! You are on your own!

Rainbow Dash: Admit it, Caballeron! You're only pretending to like Fluttershy because she has the wings you needed to steal the Truth Talisman! Isn't that right?!
Dr. Caballeron: No! I admit that was the original reason, but my henchponies and I have come to value your friendship and kindness.

Ahuizotl: [growls] Prepared to meet your doom?
Fluttershy: Um, not really. Just here to ask – why are you chasing us, Mr. Ahuizotl?
Ahuizotl: Well... the thing is, I'm in charge of protecting this jungle. If another artifact goes missing on my watch, I'm going to be in so much trouble with the other guardian creatures.
Fluttershy: Awww. That sounds like a lot of responsibility.
Ahuizotl: [stammers] It is!

Ahuizotl: You swear to never steal artifacts from the Tenochtitlan Basin again!
Daring Do and Dr. Caballeron: I promise.
Daring Do: I'll even write that in my next book.
Dr. Caballeron: Your next book? You mean you're actually A. K. Yearling?
Daring Do: Don't tell anypony!

Rainbow Dash: Hey, what's going on? I thought your first co-written novel would bring out a ton of fans.
A. K. Yearling: We've been upstaged by a new author.
Ahuizotl: And so, the noble Ahuizotl bravely toiled day and night to protect the jungle's precious artifacts... 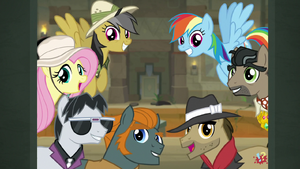