Dark Moon is a male background unicorn pony who appears in several episodes throughout the show. He has a dark gray coat, gray mane and tail, blue eyes, and a cutie mark of a white crescent moon. He is not named in the show, but he is named in merchandise.

Throughout the series, Dark Moon mostly appears in crowd shots. He first appears in the season two episode Sweet and Elite watching the Wonderbolts Derby. He later appears during Applejack's speech at the beginning of The Last Roundup.

In The Super Speedy Cider Squeezy 6000, Dark Moon watches the cider competition between Applejack's family and Flim and Flam, and in A Canterlot Wedding - Part 2, he appears at both wedding ceremonies.

In season three, Dark Moon appears at the Summer Harvest Parade crowd in One Bad Apple and at Twilight Sparkle's princess coronation in Magical Mystery Cure.

In season four, Dark Moon appears at the Summer Sun Celebration in Princess Twilight Sparkle - Part 2, at the Rainbow Falls Traders Exchange in Trade Ya!, in the Crystal Empire stadium crowd in Equestria Games, and in the auditorium when Discord and Lord Tirek appear at the end of Twilight's Kingdom - Part 1.

In Tanks for the Memories, Dark Moon hangs icicles in Ponyville in preparation for winter. In Appleoosa's Most Wanted, he watches the Appleloosa rodeo. In Make New Friends but Keep Discord, he appears as a guest of the Grand Galloping Gala. In Princess Spike, he appears during the Grand Equestria Pony Summit. In Do Princesses Dream of Magic Sheep?, he appears in Ponyville's shared dream. In Brotherhooves Social, he appears as a Sisterhooves Social spectator. In Crusaders of the Lost Mark, he appears talking to Rose as a background character during Light of Your Cutie Mark. In The Mane Attraction, he makes a background appearance in the audience for Coloratura's performance of The Magic Inside at the Helping Hooves Music Festival. In The Cutie Re-Mark - Part 1, he attends Princess Twilight Sparkle's lecture on Cutie Marks at the School for Gifted Unicorns.

In A Hearth's Warming Tail, Dark Moon appears carrying a box of decorations with Lucky Clover during preparations for Hearth's Warming Eve and caroling in the park during Hearth's Warming Eve Is Here Once Again. He later appears in Twilight's story dancing in Canterlot square with an unnamed mare during Pinkie's Present. In Spice Up Your Life, he appears as a background character in Canterlot standing with Twinkleshine and they later appear together in the city's Restaurant Row. In Buckball Season, he appears at the Ponyville Train Station among the buckball fans cheering for Team Ponyville as they leave for Appleloosa. Later, he appears in the audience for the buckball game in the Appleloosa stadium. In The Fault in Our Cutie Marks, he appears in the audience cheering as Gabby play baseball during Find the Purpose in Your Life. In Where the Apple Lies, he appears in a flashback attending surgery lecture in the Ponyville Hospital.

In Forever Filly, Dark Moon makes a background appearance in Ponyville in a distance view. In Parental Glideance, he spectates the Wonderbolts' showcase in Canterlot. In Triple Threat, he attends Thorax and Ember's Dragon Fire Flame of Friendship ceremony in Ponyville.

In the special My Little Pony Best Gift Ever, Dark Moon appears singing One More Day at the Ponyville Marketplace the day before Hearth's Warming Eve.

In Sparkle's Seven, Dark Moon appears in Applejack's fantasy, in the audience for Apple Chord's concert. In Common Ground, he makes various background appearances as a buckball fan during the Appleloosa buckball tournament during the opening newsflash, outside the stadium with Daisy and an unnamed colt before offering to pay Snails for an autograph, in the Buckball Hall of Fame, entering the stadium, talking to Lyra Heartstrings and Sweetie Drops outside the stadium, and spectating games. In She's All Yak, he appears in the circles of dancing ponies during Fit Right In. In 2, 4, 6, Greaaat, he appears watching the halftime cheerleading routine during the buckball game between the School of Friendship and the School of Magic. In The Summer Sun Setback, he appears in Canterlot attending the final Summer Sun Celebration. In A Horse Shoe-In, he appears in the audience for Octavia Melody's concert with DJ Pon-3. In Growing Up is Hard to Do, he makes a background appearance attending the Appleloosa County Fair Animal Showcase.

In the Best Gift Ever short, Triple Pony Dare Ya, Dark Moon appears waiting in line at the Ponyville Marketplace for Granny Smith's Hearth's Warming fruitcake.

In the Canterlot Nights expansion set of Enterplay's collectible card game, Dark Moon is named on card #11 C, which gives him the description "Dark Moon holds the record for most weddings crashed in all of Equestria. He always brings a lovely gift and acts like a perfect gentleman. Dark Moon just really loves wearing his tux!" 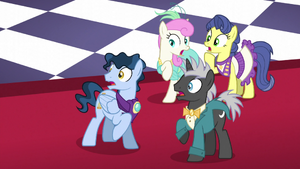