Davenport is a male Earth pony and the owner of Quills and Sofas, a store in Ponyville that sells quills and sofas. He is named directly in It Isn't the Mane Thing About You and merchandise and indirectly in some other media.

Davenport first appears in the season one episode Owl's Well That Ends Well when Spike visits his store in search of a quill. In a brief speaking role, Davenport informs Spike that he's out of quills until the following Monday and asks if he wants to buy a sofa.

Davenport later appears in the season three episode Magical Mystery Cure during the song Morning in Ponyville. Twilight Sparkle sings about Davenport in one lyric, and Davenport says good morning to her as she passes his store.

In the season seven episode It Isn't the Mane Thing About You, Davenport appears getting business advice from Rarity.

Davenport is first named in chapter 13 of Pinkie Pie and the Rockin' Ponypalooza Party!, "Pinkie Takes Action!", in which Pinkie Pie states he also does custom printing, which she says is a "Little-known secret for those in the know." In Discord and the Ponyville Players Dramarama, he plays piano for the Ponyville Players Spring Musical. In Starlight Glimmer and the Secret Suite, he helps set up Ponyville Game Night.

Davenport is first simultaneously named and illustrated in Enterplay's collectible card game. In the expansion set Equestrian Odysseys, his card #107 U names him and lists the quote "With our brand new Ponesturepedic memory foam mattress, you'll sleep like a foal seven nights a week! Care to give it a try?" In the expansion set High Magic, his card #73 U names him with a trademark symbol and lists the quote "Have you heard about our incredible sale on quills? One day only! No, no quills? What about sofas?"

"Sorry, junior. All out of quills until Monday. Need a sofa?"
— Owl's Well That Ends Well

"Hmm... Sales have been down. More colors it is!"
— It Isn't the Mane Thing About You

"Now I appreciate everypony's interest in our new sofa colors, but the yellow one is spoken for."
— It Isn't the Mane Thing About You

"Very few ponies are buying quills or sofas because of it!"
— My Little Pony: Friends Forever Issue #15

"With our brand new Ponesturepedic memory foam mattress, you'll sleep like a foal seven nights a week! Care to give it a try?"
— Enterplay collectible card game Equestrian Odysseys #107 U card of Davenport

"Have you heard about our incredible sale on quills? One day only! No, no quills? What about sofas?"
— Enterplay collectible card game High Magic #73 U card of Davenport 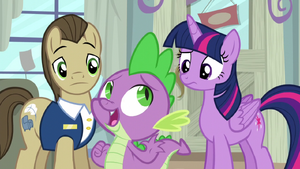