My Little Pony Friendship is Magic Wiki
Register
Don't have an account?
Sign In
Advertisement
in: Pages suggested for renaming, Pages that need improvement, Humans,
and 5 more
English

Derpy's human counterpart appears in the My Little Pony Equestria Girls franchise. She is a student at Canterlot High School and a member of a band.

In Rainbow Rocks, Derpy first appears in the gymnasium during the pre-CHS Musical Showcase band party. As Lyra Heartstrings and Sweetie Drops argue with Octavia Melody, Derpy watches them from a nearby chair eating popcorn. In the Battle of the Bands, Derpy participates in a band with "Blueberry Pie" and "Raspberry Fluff" and plays the musical saw.

At several moments throughout the film, Derpy argues with other students over who's going to win the Battle of the Bands, including "Captain Planet" and Micro Chips; during Under Our Spell, Lyra and Sweetie Drops hold her back while Bulk Biceps taunts her. A picture of Derpy appears during the closing credits slideshow.

Beginning with this film, Derpy's hair design is slightly altered.

Derpy makes background appearances dancing during the Rainbooms' respective performances at a school dance in Shake Your Tail, and at the Canterlot High School carnival in Perfect Day for Fun. In the encore short Life is a Runway, Derpy appears on the sidewalk as Rarity passes by. Rarity magically gives her a different outfit, and she models this outfit on a fashion runway. Derpy is last seen trying on shoes at Carousel Boutique.

In Friendship Games, Derpy appears as a member of the Canterlot High School Wondercolts. In one scene, she comforts Flash Sentry after "Twilight" runs away from him, and in another, she mingles with Crystal Prep Academy students during a welcome party in the CHS gymnasium. During the Friendship Games' Academic Decathlon, Derpy is eliminated in the chemistry round when a concoction she makes explodes in her face.

In Legend of Everfree, Derpy goes with her friends and classmates to Camp Everfree. She appears in various background shots throughout the film, comforting Flash Sentry after Sunset Shimmer runs away from him similarly to Friendship Games, she has a boat ride with Sandalwood, and she has one line of spoken dialogue.

In Good Vibes, Derpy makes a background appearance eating a cupcake at the Canterlot Mall.

In A Fine Line, Derpy appears waiting in line for the Tirek's Revenge video game. In Queen of Clubs, she appears as a member of the school chemistry and baking clubs. In the Rainbow Dash ending of Best Trends Forever, she is mistaken for Rainbow Dash by Rarity because of her participation in the rainbow wig trend. She also makes background appearances in X Marks the Spot, Aww... Baby Turtles, Fluttershy's Butterflies, Too Hot to Handle, and Pinkie Pie: Snack Psychic.

In the second season, Derpy appears having lunch in the CHS cafeteria in Schedule Swap. In Twilight Under the Stars, she attends the Canterlot Celestial Society Members' Social with Bulk Biceps. In Five Stars, she appears sitting with Rose at the Sweet Snacks Café. In I'm on a Yacht, she attends the pool party aboard the Luxe Deluxe and is later seen riding in a small sailboat in front of the ship. In the Rarity ending of Lost and Pound, she appears in a photo booth with Bulk Biceps at the Starswirled Music Festival as it gets crashed by Rarity and Princess Thunder Guts. In the Spike ending, she appears talking to Bulk Biceps. In The Road Less Scheduled, she appears dancing with Bulk Biceps and Snips at the festival. In the Sunset Shimmer and Applejack endings of Costume Conundrum, she talks to Micro Chips at Bulk Biceps' costume party wearing a paper bag over her head, similar to the costume her pony counterpart wore in Luna Eclipsed.

In Forgotten Friendship, Derpy appears in yearbook photos and as a new member of Wallflower Blush's gardening club.

In Rollercoaster of Friendship, Derpy makes a cameo appearance as a juice bar customer at the Canterlot Mall. She later makes several background appearances as an Equestria Land patron exploring the park and attending the park's light parade. During Photo Booth, she watches the bumper cars with Lyra Heartstrings.

In Spring Breakdown, Derpy makes a cameo appearance lying on a sunlounger while enjoying the spring break cruise aboard the Luxe Deluxe and expresses confusion when Rainbow Dash asks if anyone has seen "bad magic" aboard the yacht. She later appears transformed into a pegasus in the Castle of Friendship along with other transformed passengers as they try to return home.

Derpy appears in the beginning of the special just as the Equestria Girls arrive at the Starswirled Music Festival pitching a tent with Bulk Biceps, again at the festival security line, in the audience of PostCrush, and talking with Wallflower Blush just before Sunset and Pinkie Pie go backstage to claim the Time Twirler.

In the holiday special Holidays Unwrapped, Derpy appears shopping with Bulk Biceps at the Canterlot Mall in "Dashing Through the Mall" and exchanging holiday cards with him in "O Come, All Ye Squashful". She is also referred to as "Muffins" by Pinkie Pie in "Saving Pinkie's Pie".

In the My Little Pony Annual 2013, Derpy appears on pages 42, 43 and 45 watching a soccer game between the Wondercolts and Shadowbolts.

"And I'm all out of arrows!"
— My Little Pony Equestria Girls: Legend of Everfree 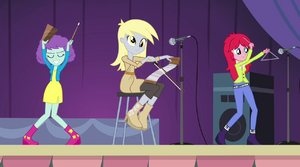