Diamond Mint, or Mint Jewelup, is a female unicorn pony with a light blue coat, an indigo mane and tail with a streak of pale purple, indigo eyes, and a cutie mark of three brilliant-cut diamonds. She is not named in the show, but she is named "Diamond Mint" with a trademark symbol and "Mint Jewelup" in different merchandise.

Diamond Mint makes several appearances throughout the series as a background pony, usually with an orange flower in her mane and wearing an orange saddle with a frilly skirt.

Her first appearance is in Friendship is Magic, part 2 when Nightmare Moon is fleeing from the town hall. Here, she appears with neither a saddle nor her cutie mark. She then appears in The Ticket Master during Pinkie Pie's Ticket Song. In a shot in which Diamond Mint doesn't wear a saddle, her cutie mark is shown.

In Fall Weather Friends, Diamond Mint takes part in the Running of the Leaves, wearing her saddle and flower. Later in the same episode, she is joined by a duplicate of herself without these accessories and a different racing number of '00'.

Diamond Mint makes numerous appearances in The Best Night Ever, attending the Grand Galloping Gala. In one shot during At the Gala, she appears as an Earth pony.

In Sweet and Elite, Diamond Mint appears very briefly during Becoming Popular (The Pony Everypony Should Know), in a checkerboard shot of numerous other ponies. In A Canterlot Wedding - Part 2, she appears attending the Shining Armor and Princess Cadance's wedding in Canterlot.

A common background appearance for Diamond Mint is being part of a galloping "mob" of background ponies with Berryshine, Shoeshine, Lyra Heartstrings, Lemon Hearts, Daisy, Amethyst Star, and Minuette. She makes such appearances in The Ticket Master, Boast Busters, Fall Weather Friends, and The Super Speedy Cider Squeezy 6000.

In Too Many Pinkie Pies, Diamond Mint appears congregating outside the Golden Oak Library with other ponies protesting the infestation of Pinkie Pie clones. In Magical Mystery Cure, she appears following Twiliight Sparkle during A True, True Friend and later attends Twilight Sparkle's coronation in Canterlot.

Diamond Mint appears in Princess Twilight Sparkle - Part 1, decorating Canterlot for the Summer Sun Celebration at the beginning of the episode and later running away from the black vines in Ponyville. She also appears in Rainbow Falls, Pinkie Pride, Filli Vanilli, and with her head mostly unattached in Equestria Games.

Diamond Mint, without accessories, appears at the end of The Cutie Map - Part 2, during the celebration in Our Town. In Bloom & Gloom, she appears running from the twittermite infestation with Daisy in Apple Bloom's first nightmare. In Tanks for the Memories, she participates in the Running of the Leaves. In Amending Fences she makes a background appearance walking in front of the Canterlot library with Spring Forward. In Canterlot Boutique, she is among several ponies who buy the Princess Dress during the first reprise of Rules of Rarity. In Scare Master, Diamond Mint walks by Fluttershy's Cottage with other ponies wearing a changeling costume for Nightmare Night.

In The Last Laugh, Diamond Mint appears in the line of Cheese Sandwich's high-class customers in a flashback at Kettle Corn's birthday party.

A translucent mini-figure toy and collector card of Diamond Mint have been released, with her name listed with a trademark symbol, as part of the tenth wave of mystery packs, which has been displayed at the 2014 American International Toy Fair.[1] According to the collector card, Diamond Mint "likes to wear a pretty flower in her hair!"[2]

Cutie Mark Magic toys include a Water Cuties brushable of Diamond Mint, the packaging of which also lists her name with a trademark symbol.

"Now if only every pony with 'Lemon' in their name was half as nice as Lemon Hearts..."
— Enterplay collectible card game Canterlot Nights #91 C card of Lemon Hearts

"Yes, it seems to be... Wait, what were we doing again?"
— Enterplay collectible card game Absolute Discord #18 U card of Bessie

"Junebug is such a dear, not even a sourpuss like Lemony Gem could get mad at her."
— Enterplay collectible card game Equestrian Odysseys #85 C card of Junebug

"No idea. Those presents better not be for YOU, though."
— Enterplay collectible card game Defenders of Equestria #76 U card of Rainbowshine 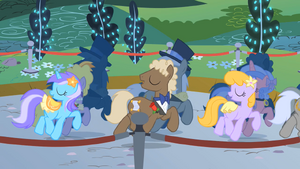