My Little Pony Friendship is Magic Wiki
Register
Don't have an account?
Sign In
Advertisement
in: Pages that need improvement, Pages that need copyediting, Unicorn ponies,
and 5 more
English

Dinky Doo is the placeholder name given to a filly unicorn seen in several episodes engaging in activities with other foals. Dinky Doo has a pale purple coat color, a blonde mane, and yellow eyes. She has sported many cutie marks including a pillow, an archer's bow, a horseshoe, a pair of dolphins, and sometimes no cutie mark at all.

Her eyes are of the standard adult mare model, rather than the filly one. She shares her design with "Ruby Pinch" and Liza Doolots.

She, along with "Tornado Bolt", Cotton Cloudy, "Princess Erroria", "Noi", Aura, and Liza Doolots and as well as Prim Posy, Lemony Gem, "Serena", "Pinkie Feather", "Rainy Feather", "Mango Dash", and "Sweet Pop", was to appear in Friendship is Magic, part 2.[1]

Dinky Doo is often a crowd-filler. She makes her debut appearance in Winter Wrap Up, jumping up and down while singing the song. In the next episode, Call of the Cutie, Dinky Doo is shown multiple times, although in each shot Dinky Doo has a different cutie mark.

Dinky Doo appears in Lesson Zero in Magic Kindergarten during Twilight Sparkle's visualization. In Luna Eclipsed, she is dressed as a firefighter for Nightmare Night.

Dinky Doo appears as one of Apple Bloom's classmates in season two. In The Cutie Pox, she stares in awe at Apple Bloom's loop-de-hoop skills, and in A Friend in Deed she plays with Scootaloo and two other foals. She has her photo taken with Rainbow Dash in The Mysterious Mare Do Well while wearing Rainbow Dash fan-gear.

Dinky Doo is also with Amethyst Star in Sisterhooves Social. The two of them compete in the titular Sisterhooves Social. Together they are given a ribbon in the pie-eating contest and pig contest. In the race, they take the lead at the box vaulting but lose it at the pie-eating to Rarity and Sweetie Belle. They somehow regain the lead in the race and reach the grape-squishing stage first, but end up losing this stage too.

When Pinkie Pie says, "Anypony else wanna panic with me?" in It's About Time, Dinky Doo is in the crowd of ponies Pinkie addresses.

Dinky Doo appears in the classroom in Flight to the Finish. She also appears in Pinkie Pride, Simple Ways, Filli Vanilli, Twilight Time, and Inspiration Manifestation.

Dinky Doo appears in present Canterlot and in Twilight Sparkle's flashback in Amending Fences, in Manehattan in Made in Manehattan, and at the Sisterhooves Social with Amethyst Star again in Brotherhooves Social. In The One Where Pinkie Pie Knows, Dinky appears outside Sugarcube Corner with Derpy and White Lightning.

A pegasus version of Dinky appears in the audience of the Wonderbolts' show in Newbie Dash. An Earth pony version appears as one of Snowfall Frost's filly friends in A Hearth's Warming Tail. In a somewhat running gag in Flutter Brutter, "Millie" covers Dinky's ears whenever she hears Fluttershy say the "swear" word "peeved".

Dinky Doo appears in episode 6 of Baby Flurry Heart's Heartfelt Scrapbook, "Nightmare Night". She also appears as one of Princess Celestia's School for Gifted Unicorns students in the first, second, fourth, and fifth episodes of Fundamentals of Magic.

In My Little Pony/Transformers Issue #2, Dinky Doo appears on page 14 in the audience of Pinkie Pie's baking show.​[​specify​]​

Dinky Doo appears in in Gameloft's mobile game as a playable character, called Fire Chief after her attire,[2] with the description "Fire Chief is a unicorn filly who's always on a roll and off to the rescue!" She was made available in response to fan request.[3] 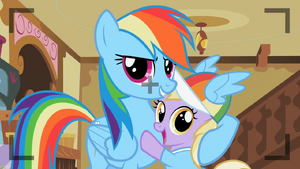