Do Princesses Dream of Magic Sheep?

Do Princesses Dream of Magic Sheep?[note 1] is the thirteenth episode of the fifth season of My Little Pony Friendship is Magic and the one hundred and fourth episode overall. It marks season five's midseason finale. The title is a play on the 1968 science fiction novel Do Androids Dream of Electric Sheep? by Philip K. Dick.

In this episode, Princess Luna enlists the Mane Six to hunt down a magical force that turns dreams into nightmares.

The plot of this episode was first revealed at San Diego Comic-Con 2014.[1]

M.A. Larson's website had previously listed season five episode thirteen with the title "From Seapony to Shining Seapony";[2] on June 27, 2015, Larson tweeted "Who do you trust more: me or zap2it??"[3] and later tweeted that the correct answer is Zap2it.[4]

The scene when Luna explains the origins of the Tantabus reappears in Memories and More.

The episode opens at the Castle of the Two Sisters, with the Mane Six racing toward Princess Luna. Luna speaks with a small sphere of black smoke, calling it the Tantabus, and tells it that she's ready. As the Tantabus eclipses the sun, Luna suddenly transforms into Nightmare Moon.

To combat this threat, the Mane Six channel the magic of Rainbow Power and fire upon Nightmare Moon with beams of multicolored light. Nightmare Moon appears to resist it at first, but when the Tantabus tears open a hole in reality and escapes, the Mane Six's magic successfully returns Princess Luna to normal. The Mane Six gather around the confused Luna for a group hug. Princess Luna wakes up in her bed, the entire experience having been a dream, but she expresses deep concern:

The next day, the Mane Six have a grooming day for their pets at Carousel Boutique, but they have trouble staying awake after not getting enough sleep the previous night. Fluttershy mentions having had a terrible nightmare, and the others say the same. When Twilight Sparkle mentions seeing a "blue smoke monster" in her nightmare, her friends are shocked to realize they all saw the same creature.

Twilight has Spike send a letter to Princess Luna to inform her about this smoke creature, and she arrives almost as soon as the letter is sent. Luna explains to the ponies that the Tantabus is a parasitic creature of nightmares that feeds on and infects dreams—when Luna dreamt of the Mane Six the night before, the Tantabus escaped Luna's dream and invaded theirs.

Luna goes on to explain that the more dreams the Tantabus feeds on, the stronger it gets—if it grows too powerful, it could escape into the real world and turn all of Equestria into a living nightmare.

That night, Twilight arranges several beds in her castle bedroom; as the Mane Six slumber, Princess Luna will pursue the Tantabus into whoever's dream it invades while the well-rested Spike keeps watch. Twilight suggests asking Princess Celestia for help, but Luna says Celestia has no power over sleep and that this is her fight alone. As the Mane Six drift to sleep, Luna uses her magic to enter their dreams.

The Tantabus subsequently invades the rest of the Mane Six's dreams. It attacks Fluttershy with a monstrous Angel, rots Applejack's prized apples, turns Rainbow Dash's favorite dream of fighting changelings into a sickeningly cute flower field, and assaults Twilight with bat-like books. It escapes Luna's pursuit each time until the Mane Six finally wake up from their nightmares.

Much to Princess Luna's shame, the Tantabus remains on the loose. Luna regrets causing ponies more suffering even after her actions as Nightmare Moon, but Pinkie assures her that everyone makes mistakes. Luna says she can stop the Tantabus as long as it remains confined to the Mane Six's dreams, but due to Pinkie dreaming about the rest of Ponyville, the entire town is now exposed to the Tantabus' reach.

With a whole town of dreams to infect, the Tantabus grows more powerful and gets even closer to breaching the real world. Twilight proposes giving everyone in Ponyville the same dream to keep the Tantabus confined in one place. Luna is reluctant to create a shared dream that large, but she counts on the Mane Six's support. The ponies and Spike go back to sleep, and Luna extends her magic over all of Ponyville, causing everyone to experience the same dream.

Within moments, the Tantabus appears to attack the dreaming ponies. Princess Luna attempts to fend it off, but most of her magic is spent keeping the dream stable. The Tantabus attempts to break out of the dream and into the real world. The Mane Six recruit the other ponies' help and fight off the Tantabus and its forces through methods only possible in a dream. Fluttershy turns into Flutterbat, Big McIntosh turns into an Alicorn, Spike turns into a lance-wielding knight with Derpy as his steed, and Rainbow and Applejack turn into Zapp and Mistress Mare-velous, respectively. Using the power of the dreamscape, Scootaloo, Filthy Rich, and Twilight assist in the fight as well.

Despite the town's efforts, however, Princess Luna's guilt causes the Tantabus to grow to immense size. Luna tearfully reveals that she herself created the Tantabus to punish herself with nightmares after the suffering she inflicted as Nightmare Moon. Realizing that the Tantabus is feeding off of Luna's guilt, Twilight and her friends rally around her, telling her to forgive herself.

"Nightmare Moon would've wanted the Tantabus to turn Equestria into a nightmare! You're doing everything you can to stop it! Don't you see? That proves you're not the same pony you were then!"
— Twilight Sparkle

With her friends' help, Luna finally moves on from her past. As the Tantabus loses its strength and shrinks in size, Luna draws it back into herself before it can escape the dream world. The next morning, the Mane Six wake up feeling well-rested. Luna, however, is fast asleep in the middle of the room, dreaming peacefully. The episode ends with Luna in a restful sleep on a bed of grass, surrounded by colorful flowers and a waterfall.

Princess Luna: Greetings, Tantabus. I am ready. Do your worst.

Twilight Sparkle: Spike, could you send a scroll to Princess Luna?
Spike: Sure! All set!
Twilight Sparkle: Dear Princess Luna, last night my friends and I all dreamt of a creature made of blue smoke. I'm sure you're very busy, but [yawns] when you have the chance, please let me know if you have any idea what it could mean. Yours, [yawns] Princess Twilight Sparkle. You can leave out the yawns.

Applejack: [yawns] One good thing about not sleepin' well last night, shouldn't be too hard to fall asleep now.
Pinkie Pie: Are you kidding?! This is so exciting, I don't know how I'm ever going to— [snores]

Princess Luna: I can see the Tantabus has already turned your slumbers into a nightmare!
Rainbow Dash: What are you talking about? This is my favorite dream!

Spike: Well, if you're gonna dream, might as well dream big, right? Hi-yah! 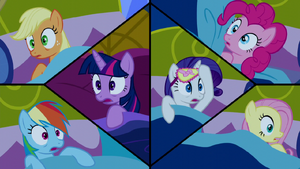