Not to be confused with Dr. Horse (also known as Doc Top).

Doctor Horse, also called Dr. Greymare, Dr Horse, or Doctor Horses, is a male pony who appears in Read It and Weep, Pinkie Pride, Equestria Games, A Health of Information, My Little Pony: Friends Forever Issue #27, and My Little Pony: Friendship is Magic Issue #81. He is a unicorn in My Little Pony Friendship is Magic, Friends Forever Issue 27, My Little Pony: Ponyville Mysteries Issue #1 cover A, Gameloft's mobile game, and some merchandise, while he is an Earth pony in Friendship is Magic Issue 81, Tails of Equestria, and most merchandise. He has a cream caramel coat, caramel brown or yellow mane and tail, dark cyan eyes, and a cutie mark of an electrocardiograph monitor. He works at Ponyville Hospital as an M.D. He is unnamed in the show and most comics, his unicorn version only being addressed as "Doctor" by Twilight Sparkle and as "Doc" by Rainbow Dash and Applejack, but his unicorn version is named "Doctor Horse" in software and part of some merchandise and "Doctor Horses" in another part of some merchandise, and his Earth pony version is named "Dr. Greymare" in one comic and "Dr Horse" in other merchandise.[note 1]

Doctor Horse's name is a play on Dr. House from House.[3]

In Read It and Weep, brown-maned Doctor Horse, with his cutie mark, makes a speaking appearance as Rainbow Dash's doctor at Ponyville Hospital after she crashes and injures one of her wings. He assures Pinkie Pie that the crash didn't give Rainbow spider powers or healing powers and tells Rainbow and her friends that she'll need to stay in bed for several days.

Doctor Horse later approaches Rainbow Dash and informs her that she's being checked out of the hospital. When she tries to check herself back in, complaining of pain in her uninjured wing, the doctor accuses her of having become lazy during her hospital stay (calling it a "severe case of lazy-itis") and kicks her out again.

When Rainbow Dash tries to sneak into the hospital at night, Doctor Horse mistakes her for a slipper thief and chases her across Ponyville alongside "Nurse Sweetheart", Night Watch, and Screwy.

In Equestria Games, yellow-maned Doctor Horse and yellow-maned S04E12 Unnamed Unicorn Stallion #2, one with no cutie mark and the other mostly obscured by Parasol, make non-speaking appearances as members of the Equestria Games audience at the Crystal Empire.

In A Health of Information, brown-maned Doctor Horse, with Swamp Fever, makes a non-speaking appearance at the Hayseed Swamp in a flashback.

Dr. Greymare appears on My Little Pony: Friendship is Magic Issue #81 page 5, where he reports on Rumble's condition following a crash.

Doctor Horse, as a brown-maned Earth pony with his cutie mark, appears on Tails of Equestria page 25.[4]

Doctor Horse is a playable character in Gameloft's mobile game. The game's description of him states, "As a general practitioner, Doctor Horse is as no-nonsense as they come: He's not afraid to tell you the truth, even if it hurts."

Doctor Horse, as a brown-maned Earth pony with his cutie mark, appears on the Season 2 poster/DVD set packaging/T-shirt/WeLoveFine.com iPhone case, listed as simply "DOCTOR" on page 30 of Little, Brown's guidebook The Elements of Harmony, and listed as "Dr Horse" on page 71 of the Ultimate Guide published by Orchard Books in the United Kingdom. In the Canterlot Nights expansion set of Enterplay's collectible card game, Doctor Horse is named on his card, #85 F, which features him as a brown-maned unicorn with his cutie mark and gives him the description "Many lives have been changed by Doctor Horses'[sic] advanced research into the study of Lazy-itis."

"She's going to be fine. Luckily she has friends like you who got her over here in a jiffy."
— Unicorn, Read It and Weep

"Congratulations, Rainbow Dash. We're checking you out of the hospital."
— Unicorn, Read It and Weep

"[chuckles] I think I know what the trouble is. A severe case of 'lazy-itis'."
— Unicorn, Read It and Weep

"Rainbow Dash, what in the world is going on? Why are you stealing slippers?"
— Unicorn, Read It and Weep

"Sorry I don't have better news, Applejack, but that was a nasty fall."
— Unicorn, My Little Pony: Friends Forever Issue #27 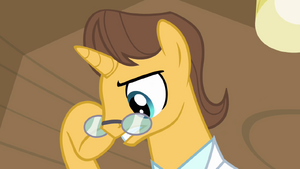